Photo: Fruitlands farmhouse, ca. 1843, Prospect Hill, Harvard, MA. Fruitlands was a short-lived utopian community founded in the 1840s by Amos Bronson Alcott (father of Louisa May Alcott) and Charles Lane. This National Historic Landmark was listed on the National Register of Historic Places in 1974.. Photographed by user:Midnightdreary (own work), 2008, [cc-by-3.0 (creativecommons.org/licenses/by/3.0)], via Wikimedia Commons, accessed August, 2013. 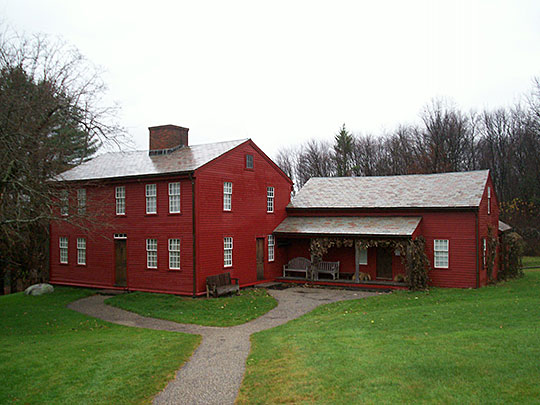 Harvard was settled about 1704 and incorporated in 1732. It was named in honor of John Harvard, first patron of Harvard University. It has always been an agricultural community, although at various times there have been industrial activities. In 1783 a group of townspeople opened a "silver mine" near Oak Hill, but the silver was non-existent. Horticulture is now the chief occupation, apples and peaches being grown in large quantities.

The Library, bordering the Common, is a 1-1/2 story red brick building with a brownstone foundation; in it is the private library started about 1793 by the Reverend William Emerson, father of Ralph Waldo Emerson.