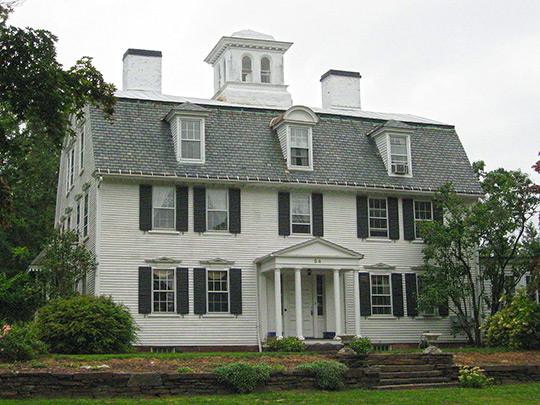 About 40 years after the Pilgrims had landed at Plymouth, a party of Connecticut men petitioned the General Court at the Colony of Massachusetts Bay for permission to settle a second 'plantation' north of Hartford.

The first crude shelters were built along a rough dirt road, now Pleasant Street. Four acres of land were presented to each householder, together with a generous portion of fair meadow. Soon the fertile soil attracted many other pioneers, and Hawley, Market, and King Streets were quickly settled.

In the beginning, Indian attacks were infrequent, for when the French and Indian Wars began, the Nonotucks had long since left the country. But other tribes began to go on the warpath and, at the beginning of King Philip's War severely harassed the settlers.

Early in the 18th century, Jonathan Edwards, a Puritan divine, took over the Northampton pastorate and was soon recognized as the mightiest preacher in New England. He was one of the inspired leaders of the 'Great Awakening' of 1740, America's first great revival movement. Soon in a frenzy of religious hysteria the townsfolk were falling into trances and seeing visions; even little children swooned in the streets from their 'conviction of sin.' All New England was convulsed with terror of hell-fire. Finally Edwards's Northampton career came to an abrupt end with his forced removal to Stockbridge as a missionary. It was in Stockbridge that he wrote his great philosophical treatise, 'On the Freedom of the Will.'

After the Revolution, deprived of the independence for which they had fought, the inhabitants of Northampton rose in rebellion along with many of their neighbors. Led by their preacher, Sam Ely, they stormed the courthouse, in 1782, to prevent the foreclosure of their farms. In 1786, near the tragic end of Shays's Rebellion, a crowd of angry citizens again descended on the court to keep it from holding session. On the other side of the question, in this same year, William Butler, a youth of twenty-two, founded the Hampshire Gazette (still published today) to combat the discontent.

Impetus was given to the development of the town by the establishment here of Smith College by Sophia Smith, a resident of Hatfield, at a period when the intellectual standards of women's colleges were very slightly superior to those of secondary schools. Her phrase, 'the intelligent gentlewoman,' expressed the ideal of the college body; the spirit of Christianity was to pervade the teachings and life of the college, but it was to be absolutely non-sectarian. Smith opened with 14 students in 1875.