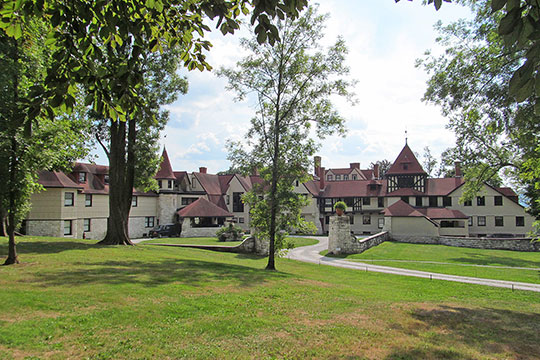 In 1762 the Mahican Indians sold their land to settlers from Connecticut and in 1767 the town of Lenox was incorporated. At first Lenox was small community of farmers with few merchants, innkeepers or traders. But in 1784 the town became the county seat which brought a significant number of people here including attorneys and their clients.

Early industry included mines, iron works, glass works, saw mills, grist mills, fulling mills and paper mills. By the late 1800s the glass industry and iron industry had gone out of business due to competition in the Midwest. Industry began to play a smaller role in Lenox's economy and as time went on, most new industries chose to locate to Pittsfield and Lee instead of Lenox.

By the mid-1800s the word began to spread about the clean air and country atmosphere of Lenox. The town attracted intellectuals, socialites, artists and literary figures looking for a reprieve from New York City.

Country farms were being purchased and replaced by large estates modeled after those of European royalty. In 1903, land was being sold in Lenox for as high as $20,000 and acre, while similar properties in surrounding town often cost but a few dollars per acre.