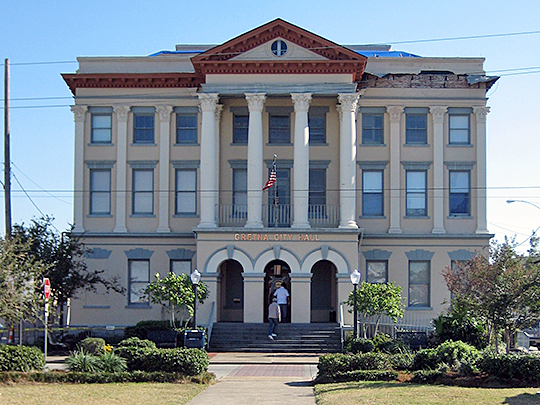 Gretna traces its founding to 1836 when Nicolas Noel Destrehan commissioned surveyor Benjamin Buisson to draw a plan for a settlement called Mechanikham. In 1838 the St. Mary's Market Steam Ferry Company began to develop a settlement called Gretna immediately adjacent to Mechanikham. The two areas were collectively known as Gretna, although they maintained separate designations on maps as late as Norman's 1858 chart of the lower Mississippi River.

Taken together, the Mechanikham-Gretna plans consisted of a standard grid with a grand boulevard now known as Huey P. Long Avenue. The boulevard had a wide neutral ground which provided for an open commons area. Although partially built over, the neutral ground remains today as Gretna's only formal planning feature. The old Jefferson Parish Courthouse occupies the second block of the neutral ground and faces the Mississippi River with a monumental Renaissance Revival facade. The first block forms a kind of axial green in front of the courthouse. The monumental effect is enhanced by a memorial triumphal arch set at the head of the green. With few exceptions the district has a single story scale. Most of the buildings are set close together and fairly close to the street. Public and commercial buildings are set relatively near the river, while residences are located throughout the district.

Gretna resembles an older New Orleans neighborhood both in terms of the streetscape and the local building types and styles. Undoubtedly this is because the town developed as part of the overall New Orleans metropolitan area.