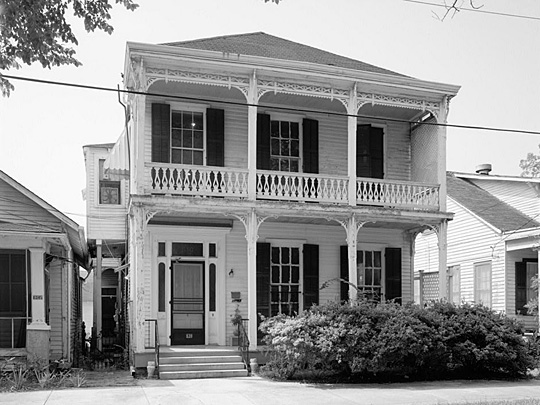 The Beauregard Town Historic District was listed on the National Register of Historic Places in 1980 with boundary increases listed in 1983 and 2000. Portions of the text, below, were adapted from a copy of the original nomination document. [‡]

The greater part of Beauregard Town is locally outstanding turn-of-the-century middle class residential area, certainly the finest surviving example in East Baton Rouge Parish. The designated area has an intimate scale, an unusual purity and an unusually high incidence of intact structures. There is almost no re-siding and almost no incidence of lost or removed architectural details. In addition, many of the structures are garnished with turned columns, brackets, barge boards, balustrades in various styles. Buildings of this type occur in sufficient quantity to characterize the district with a variety and richness which is unattainable in an area composed of simple workers houses.

Beauregard Town enjoys a lesser degree of significance as an early 19th century community which was conceived as a Baroque City plan. All that survives of the plan are the diagonal radiating streets. Although their purpose is no longer apparent to the casual observer (except from the air) they do cut strong vistas through the townscape.

In 1799 Elias Beauregard probably conceived the idea of developing a planned center of town for Baton Rouge. It was at the time the center of government for the Spanish province of West Florida. Elias Beauregard, first commissioned Iro Kneeland to design and lay out the town. Being dissatisfied with Kneeland's work, Beauregard later engaged the services of Arsene LaCarriere LaTour to plan his town. LaTour was the French engineer who was later to become Andrew Jackson's chief engineer for the battle of New Orleans. LaTour was later to write several books on military fortifications. In 1806 LaTour presented to Elias Beauregard the plan for a classically laid out community.

In 1806 a plan for the old town was designed by Elias Beauregard and the French engineer Arsene LaCarriere LaTour, in the Grand European Manner. The 9 x 12 block planned town was to have tree-lined boulevards, radiating streets and a central Cathedral Square. A Grand Rue, now known as Government Street, was to be "immediately planted with trees," according to Elias Beauregard. This major east-west axis divided the town into two parts. In the central part of the old town there was a Cathedral Square with radiating streets to the four corners of the town, thus allowing easy access to the cathedral. At the ends of the diagonal streets there were to be public institutions and open spaces. At the end of Beauregard Street there was to be a college; a hospital terminated Grandpre Street; "Calle Sr. Penalvert" linked the cathedral with the Ursuline Convent and adjacent Plaza de Mexico, with its fountain; Somerulos Street terminated at the Governor's Office and its adjacent plaza, the Plaza de las Floridas, also with a fountain. In addition to Mexico and Florida Plazas there was also a riverfront plaza called Plaza de Colomb. Also on the riverfront were markets, the King's Store and a customs office. There was a theater along the Grand Rue bordered by St. Louis and St. Philip Streets. Terminating the Grand Rue to the east were to be a Governor's residence, troop barracks, formal gardens and a coliseum.

Anxious to begin development of his town, Captain Beauregard organized a public land auction. This was done with the consent of Carlos de Grandpre, Governor of West Florida. On July 22, 1806, lots were sold.

The land uses proposed for Beauregard Town were partially fulfilled. The public plazas were urban open spaces until expansion pressures covered them with public structures during the early 1900's.

Beauregard Town first developed as Baton Rouge's French community. There resided within families with names such as Favrot, DeGrandpre, Borbois, Heude, Granary, Arbour, Trahan, Hebert, Landry, Monget, Charotte, Templet, Legendre, Doiron, Monget and Dalcourt. Accordingly, French was the principle language in the old town. After the building of the Old State Capitol (1847-49), many other cultural groups began to move to Beauregard Town. According to General McGrath around "1860 and thereafter French was rarely heard on the streets of Beauregard Town." It was at this same time period that King Balls, the major social event among Beauregard Town's residents, also went out of fashion.

But there was still much social activity connected with the old town. Performing groups often played for Baton Rouge audiences in the House of Representatives chamber of the Old State Capitol. Steamboats left from the banks of the Mississippi for an entertaining day cruise north to Bayou Sara.

When the Civil War came in 1861, there was great outpouring of patriotism for the southern cause. This, however, was short lived and in 1862 Beauregard Town, along with the rest of Baton Rouge, was occupied by Federal troops. The area was bombarded by Union gunboats, and to prevent its recapture by Confederate troops, General Butler ordered the city destroyed. The order was never wholly carried out but it did cause the burning of some of the buildings in Beauregard Town.

After the war, the economy of Beauregard Town was stagnant. But the old economic base of the area (the cotton and lumber industries) remained and it slowly began to regenerate. By the late 19th century prosperity had been restored. Lumber and cotton were shipped via the warehouses in the western end of the district. It was probably this, more than anything else, that generated the richest residential redevelopment boom which peaked in Beauregard Town about the turn of the century. The prosperity was undeniable. Between 1900 and 1907 total bank deposits in Baton Rouge doubled. Property taxes increased rapidly. There were 10 industrial cotton gins operating in the area. A house in Beauregard Town which was taxed at a rate of approximately $3.00 per year in the early 1890's was taxed at a rate of about $9.00 per year only 10 years later. The redevelopment was characterized by modest middle and lower middle class residences. Records suggest that the people were of reasonable means and on the whole moderately well educated. Some had gone to private schools and some had attended college. There was apparently a high incidence of church attendance and people gave money to churches in liberal quantities. This is indicated by the large number of surviving receipts for donations.

Electricity made its appearance in the 1890's and street paving began in 1901, though it was not finished until many decades later. Transportation from the residential area to the center of town was provided by train trolley lines which ran up and down Government Street. The trolley barns were also located on Government Street (now demolished).

Beauregard Town was described as a quiet town at the turn-of-the-century. There were, however, periodic social events in which many of the residents of Beauregard Town participated. There were organized picnics at the city park. There were firemen's balls in which the participants often came in costume. There were several parades a year and often fire company engines were decked out as floats. The Fourth of July was elaborately celebrated with many floats, costume balls and bazaars.

Another attraction in the area was the race track in Baton Rouge which no longer exists.

A major center of activity was in the old Baton Rouge Market. The market was first located on North Boulevard at the south end of Third Street and later, in 1854, moved to the site of the existing Municipal Building, St. Ferdinand and North Boulevard.

Although the major business of the market was to sell meats and produce during the hours of 2 a.m. until 8 a.m., the market also served coffee and doughnuts at all hours, thus attracting a crowd eager for the latest political and social news. In addition the old market was used for all-night dances on special holidays.

Standard Oil of New Jersey established a plant in northern Baton Rouge in 1909. Slowly development in the city shifted away from Beauregard Town. In the 1960's Government Street was redeveloped with large scale commercial properties which destroyed the core of old Beauregard Town. This area was therefore excluded from the nomination. By the 1960's the residential area had fallen into decay and decline. However, since the early 1970's Beauregard Town has undergone a revival of interest. Many of the old houses have been restored and converted for professional offices. The area is rapidly becoming the fashionable historic area in the city.

Beauregard Town was platted in 1806 with a grandiose Baroque city plan composed of four diagonal avenues cutting across a grid of perpendicular streets. However, the neighborhood did not experience major development until the late nineteenth and early twentieth centuries — a small warehouse district on the west end; a few institutional buildings such as a courthouse, schools and churches scattered about; and dwellings everywhere else. The existing form in its opening statement incorrectly identifies Beauregard Town as a turn-of-the-century neighborhood. A more correct analysis is found later in the breakdown by period, which finds that about 74% of the district's approximately 455 buildings date from between 1900 and 1930. Survey work for this addendum revealed that nineteen buildings in Beauregard Town survive from the 1930s and 40s, several of which are notable landmarks.

The existing nomination form is correct in stating that the majority of Beauregard Town's residences are modest. They include Queen Anne Revival and Colonial Revival cottages, fairly standard bungalows, and shotguns. Although the neighborhood remains at least 50% residential, its proximity to downtown and, most especially, to the courthouse, has resulted in the rehabilitation of a number of its houses for commercial and professional uses.