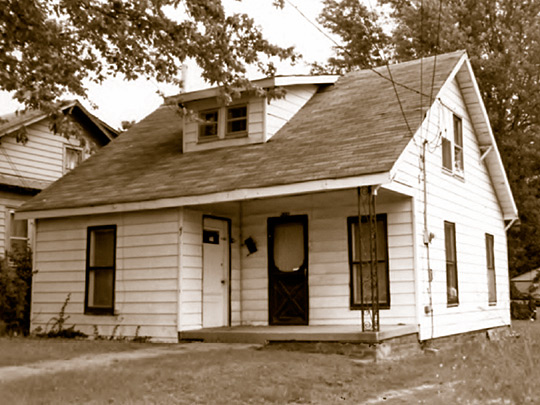 The Ralph Bunche Historic District was listed on the National Register of Historic Places in 2004. Portions of the content on this web page were adapted from a copy of the original nomination document. [‡]

The period of significance 1900-1964 reflects the growth and development of the Ralph Bunche Historic District. The beginning date, 1900, indicates the year when the first blacks made their home on Saw Dust Trail, now Sam Terry Avenue, in Glasgow, Kentucky. The ending date, 1964, indicates when the Ralph Bunche School closed as the only all African-American school in Glasgow, Kentucky. The Ralph Bunche Historic District was named for the school, which was named for Ralph Bunche, (1903- 1971). Although Bunche was orphaned at the age of eleven, he became the first African American to earn a PhD in Political Science from Harvard University in 1934 and was the recipient of the Nobel Peace Prize in 1950. He organized and chaired Howard University's department of political science, while traveling extensively to research colonialism in Africa. During World War II he joined the Department of State and quickly became the first African American to head a division. Bunche moved to the United Nations in 1948 where he was awarded the Nobel Peace Prize for his role in mediating conflicts in the Middle East. He became undersecretary general in 1968, the highest rank held by an American at the UN. At his death in 1971, he left behind a legacy as a distinguished statesman and arbiter of world peace.

Early Kentucky black settlers came from plantations primarily in Virginia, Maryland and the Carolinas. Irish, Scotch, and German immigrants brought black slaves here at the time of the first permanent settlements at Harrodsburg and Boonesborough in 1775. Planters immigrated to the Bluegrass area initially and later to the western portions of the state, bringing their slaves with them (Karan, 1977:28). The first census taken in Kentucky, specifically Harrod's Fort in 1777, showed the earliest white settlers possessed nineteen slaves.

From Kentucky's earliest days, there were free blacks as well as slaves living in the state. There were 144 free blacks and 12,430 slaves in Kentucky in 1790. The number of free blacks increased to 10,684 by 1860. Some had been granted freedom by their masters. Others came into the state as free men or were born to free parents. Slaves who were freed by their masters were given certificates signed by their master and county official who issued the certificate. These "free papers" were very important. Some were sold back into slavery if the papers could not be produced or had been destroyed.

By 1790, only one-quarter of Kentucky's white families held slaves and most of these families held less than five slaves each. The typical slave-holding family kept a cook and a farm laborer and perhaps one or two young slaves to groom the horses or help with the housekeeping chores.

Historically, blacks in the Pennyrile Region were brought here or were born into this area as slaves and left or continued to reside here as freemen. By 1800, nearly 20% of Kentucky's aggregate population of 220,000 was slave. That same year, only 9% were slaves in Barren County. The percentage increased in successive decades with 15% in 1810, 19% in 1820, 20% in 1830, and 24% in 1840. Between 1850 and 1860 the percentage held steady. Farms raising wheat, oats, corn, livestock were worked by slave labor. After the land had been cleared, larger farms developed, needing more slaves to raise tobacco and hemp. Even as late as 1860, there were five families in the state that held as many as 100 slaves. After the Civil War, blacks left the farms and began moving to the cities.

Long-term census records show dramatic increases in black populations prior to 1865, and steady losses of blacks from counties during subsequent decades. In the years between 1880 and 1980, all but one county in the Pennyrile Region lost black population, some of which were ten percent black. In 1880, Barren County ranked fourth among thirty-nine counties in the region with 18% of the population being black. Successive decades saw a decrease in the black population with 17% in 1890, 11% in 1930, 10 % in 1940 and 5% in 1980 (Martin, 1988: 208). The early decline of African-Americans in post-bellum Kentucky may have been due in part to the slave trade or plantation owners who left the state and took their slaves south to grow cotton because it was more profitable than the production of hemp, cereals, or livestock. Other reasons for the late decline included: the lure of better jobs in northern industries; the indignity of legal segregation; the lack of educational opportunities with only two-four year colleges open to blacks; and no graduate courses available for blacks.

The Ralph Bunche Historic District is an excellent example of a well-developed African-American community that has retained the majority of its historic resources including educational and religious facilities as well as commercial and residential buildings within a nineteen-block area in Glasgow, Kentucky.

An act of the General Assembly in 1883 combined funds for black and white schools that could be distributed with no distinction on account of race. Many districts that had not already done so, established schools for black children. This provision was written into the state constitution in 1891, although it clearly stated that white and black children should attend separate schools. In 1890, 56% of Kentucky's black population could not read and write, however, by 1910, the percentage was reduced to 28%. Since the early-1900s, there have been three schools in Glasgow for blacks. The first school was a two-room schoolhouse known as the Normal School that may have been located on South Lewis Street (Stockton interview). No physical evidence of this school exists today.

The one existing school is the Ralph Bunche School. Built in 1950, this two-story brick edifice was the only all-black school in Glasgow that offered classes from 1st-12th grades until 1964, when the school temporarily closed. In 1965, public schools were integrated throughout Kentucky. The overall percentage of black students was small. In a few districts there were more than 20% black. Therefore, a small number of black students attended predominantly white schools.

In Barren County, the earliest occupation recorded for African-Americans was working as slaves on farmland. This primary type of work changed over time as African-Americans began leaving the countryside and headed for the city in the early-1900s. During the 1930s and 1940s, blacks migrated to Glasgow to procure better paying jobs. Women did primarily domestic work for whites during the 1950s while black men began working in the service sector such as movers and delivery people for furniture stores and lumber companies or as cooks in restaurants owned by whites. Working at a white-owned restaurant did not give blacks the privilege to eat there.

Downtown Glasgow was off limits to blacks in the early-1900s. African-Americans learned how to navigate through town without entering into the white area. No businesses on the courthouse square were owned by African-Americans, thus, their businesses were primarily located in the Ralph Bunche Historic District.

Historically, whites owned property in the Ralph Bunche Historic District and whites owned many of the earliest businesses in the district. Several white-owned businesses allowed blacks to work there and purchase items, including Roy Harden's Store. Ren Huffman's Store allowed black men to work as stock clerks in the late-1960s and sold merchandise to blacks. Some white-owned businesses in the district would not allow blacks to even step on their land including Froedge's Barber Shop, located at 500 East College Street, where only whites could get their hair cut. Herman Matthews' junkyard was a white-owned business that would not sell to blacks. None of these businesses exist today.

Since whites historically owned property in the Ralph Bunche Historic District, black sharecroppers made deals with landowners to either sell them property or rent them houses. Thus, both whites and blacks owned property in the district. However, it wasn't until after integration in the late-1960s and early-1970s did whites live in this area. Houses in this neighborhood were constructed by white property owners and rented to African-Americans beginning in the early-1900s.

Domestic architecture in the Ralph Bunche Historic District dates from the early-1900s through the 1950s. Considering the majority of homes are one- and one-and-a-half stories in height and were constructed of wood-frame, it is not surprising that the predominant architectural style in this district is Craftsmen/Bungalow. Architectural features include: knee braces; exposed rafter ends; weatherboard siding; dormer windows; turned wood columns; and spindle work. Although the majority of the homes were constructed between 1900 and 1940, there are a few one-story brick Ranch style homes interspersed throughout the neighborhood. One of the oldest houses in the neighborhood is Dr. Porter's home and office at 101 Scott Street.

Over the years, the district has grown due to the influx of low-income housing and a public park in the 1970s and 1980s on the east side. New construction in this area substantiates the fact that this African-American community has continued to evolve despite numerous hardships relating to the ability to gain employment in the immediate area. Currently the district covers part of 19 blocks and encompasses approximately 93.56 acres and is an excellent collection of buildings and sites that reflect the African-American experience in Glasgow, Kentucky.