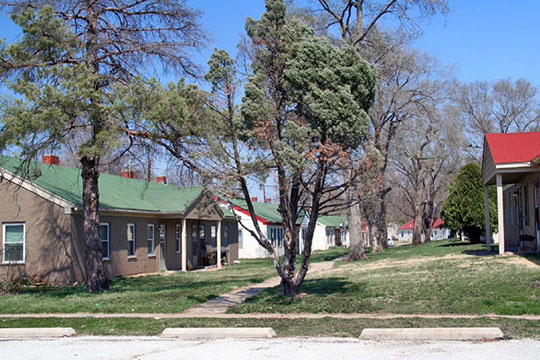 The Sunflower Village Historic District was listed on the National Register of Historic Places in 2014. Portions of the content of this web page were adapted from a copy of the original nomination document. [‡]

The Sunflower Village Historic District is a rare example of "temporary" war-time housing that was built by the federal government in 1943 and evolved into housing for veterans during the post-war housing shortages. The property then successfully transitioned into a privately-owned housing development that continued to provide affordable housing in one of the state's richest counties. The Village is significant for its association with the Sunflower Ordnance Works and for its post-war role as affordable veteran housing. The period of significance spans from 1943 to 1959 reflecting the period in which Sunflower Village was owned and operated by the federal government. [Today, 2015, the homes survive as a privately-owned, rental community.]

Sunflower Village was constructed in 1943 by the federal government (funded through the Lanham Act) as temporary housing to address the immediate housing need for workers at the Sunflower Ordnance Works (SOW) in northwest Johnson County, Kansas. Like most war plants, the initial plans for SOW did not include construction of any housing. An increase in the number of plant workers and overcrowded conditions in nearby communities combined with war-rationed rubber and the plant's rural location, necessitated the housing project's rapid construction shortly after the plant began its first powder production. The development provided affordable housing to plant workers throughout its history. The housing shortages that had plagued the United States before World War II still existed after the war and 1945 brought an urgent need to house returning soldiers. Sunflower Village was opened to veterans who were attending nearby colleges and training programs through the GI Bill. After the Korean War, Congress mandated that the U.S. War Department get out of the housing business. Sunflower Village was sold by the government in 1959.

The dwelling units themselves were designed by Kansas City architects Marshall and Brown and are distinguished by their uniformity, simplicity, and total void of ornamentation and detailing. Utilitarian in design and function, the primary significant factors that are reflected by the individual buildings are the speed in which they were constructed, the influence of war-time materials rationing on their design and construction, and that the project was designed to be temporary. With its origins as temporary war housing, Sunflower Village transitioned to veteran housing during the post-WWII housing shortage and continues today as an affordable housing community, under private ownership for 55 years. With nearly 90% of the original buildings extant, Sunflower Village has stood the test of time and far exceeded its intended life-span.

The physical layout of the Village is historically significant as a planned housing development and the site itself is largely unaltered. Over 90% of the original buildings are in place with no contemporary construction. The buildings that have been lost were located outside of the outer loop road therefore the impact of their loss is minimal on the layout and massing of the primary neighborhood clusters and the overall community plan. The Sunflower Village Historic District retains a high degree of integrity of location, neighborhood design, setting, feeling, and association. The physical characteristics that comprise the original neighborhood design are remarkably intact. Key character-defining features including the vehicular and pedestrian traffic patterns, the unique combination of curvilinear primary roads and traditional grid-pattern neighborhood clusters, green space within and surrounding the development, and specific landscape features such as the two ponds, are all extant. The property maintains a strong cohesive neighborhood feeling.

Interior and exterior finishes generally reflect an early-1970s remodeling that provided overdue maintenance and extended the life of these buildings that were built as temporary structures with gypsum board roofs and exposed concrete floors and walls. Composition shingles have been installed on roofs and textured stucco was applied to the exterior of most buildings as well as to the interior apartment walls. Front porches were added to the residential units but the primary apartment entrances are original and a number of the original stoop-canopies remain at side and rear entrances. On approximately half of the residential buildings, the central portion has been repurposed as garages for dwelling units on each end of the building. Replacement doors are in place at most apartment entrances and garage doors are in place generally on the rear facades. Some residential buildings retain their original 1/1 double-hung wood windows although most units have replacement aluminum units, matching the original style. Fewer than ten of the residential buildings have replacement vinyl windows. The alterations have compromised the integrity of building design, materials, and workmanship. However, the buildings generally retain their original form, massing, and the pattern of door and window openings; they continue to define the spatial organization that is critical to the overall community plan and neighborhood context.

Cultural geographer Chris Post notes that the physical layout of Sunflower Village was one of its most distinctive features. When viewed as a district, the changes to individual buildings do not significantly impact the neighborhood design or feeling of the community as a whole. The high level of integrity of location, setting, neighborhood design, feeling and association far outweighs the loss of integrity in individual building design, materials and workmanship. Designed by renowned Kansas City landscape architects and city planners Hare & Hare, the original plan of Sunflower Village is largely intact and stands as an excellent representative of a Garden City planned community.

The first residents moved in to Sunflower Village on August 1, 1943. Throughout the war years, the Village was a bustling community. Sunflower Village's history as a federally-owned and operated housing project, first serving war workers and then returning veterans, came to an end in 1959, sixteen years after its construction in 1943. Louis H. Ensley of Quickway Homes in Lawton, Oklahoma was the first private developer to own and operate Sunflower Village.