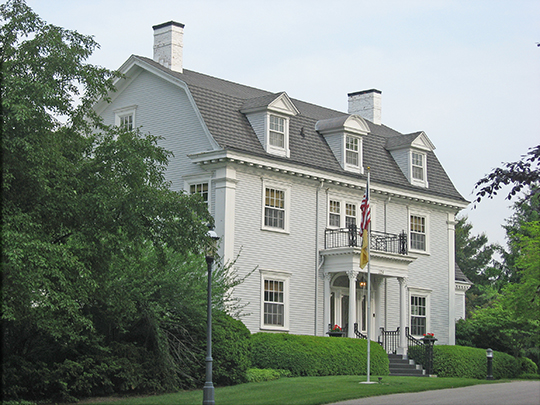 The William C. Van Arsdel House (also known as The Elms) was listed on the National Register of Historic Places in 1984. Portions of the content of this web page were adapted from a copy of the original nomination document. [‡]

Built in 1917, The Elms is a Colonial Revival house, which sits in the middle of 2.25 acres of land. It is in excellent condition and has many notable Colonial Revival features, such as a balconied entry portico, Corinthian columns, corner pilasters, and glass-paneled doors. The house is on a slightly higher elevation than the street and is reached by a long, semicircular paved driveway.

The original two-and-one-half story house is a nearly square, 44' x 45', bevel-sided frame structure which faces west. It has a gambrel roof with three dormers across the front and two large gables in the rear. In 1928, a one story, frame addition (40' x 38') with a flat roof was added to the rear of the house and serves as a drawing room and banquet hall. The facade of the house has three bays and a central entrance. At the entrance, there is a balconied portico supported by two free-standing and two engaged fluted Corinthian columns. The glass-paneled door with side lights has a fan light above it and four small fluted, engaged columns in the Corinthian mode flanking it. A wrought iron railing leads up the front steps and matches a similar railing along the sides of the portico balcony. The portico features a modillioned cornice and this matches, on a smaller scale, the cornice of the house.

Flanking the front entrance are two double-hung sash windows with eight upper lights and a single lower light. The windows are capped with simple entablatures and have plain sills. Directly above them are two identical windows. Above the portico are grouped three windows with double-hung, single light sash. They are capped by a continuous entablature and have a plain sill. Most of the other windows on the house are double-hung sash with either single lights, multiple lights, or multiple upper lights with a single lower light. Some have entablatures with plain sills and others have plain molding surrounding them. There are several stained glass windows.

The cornice of the house is made of wood and features modillions and dentils. Wood corner pilasters frame the house. The gambrel roof, made of asphalt, has a return. There are three dormers placed horizontally across the front of the structure. Each dormer contains a double-hung sash window with six-over-six lights. The center dormer has an arched pediment and roof; the other two have gabled pediments and roofs. The four brick chimneys are both exterior and interior, two on the main gambrel roof and one on each gabled roof at the rear.

The only changes to the exterior of the house are the rear addition and the enclosure of a large porch on the south end into a study, and a small back porch into a kitchen. A small, open "light court" was made where the addition joins the original house. The main level of the house is divided into seven rooms: living room, dining room, kitchen, bedroom, study, banquet room, and drawing room. Entry to the rooms is through an 11' x 24' center hall.

At the end of the hall, a wide, open stairway, with a painted balustrade and unpainted posts and handrail, leads to the second level. On the stairway landing between the floors, a doorway leads into a solarium which contains 3 stained glass window. The second floor contains three bedrooms, four baths, and other rooms originally used by servants. On the upper level are additional servants' quarters, divided into three rooms. The interior of the house is notable for large cove moldings and three marble fireplaces, along with other decorative wood and brick fireplaces, chair rails, French doors, and the solarium.

The Elms is significant as one of the most elaborate and best preserved examples of the Colonial Revival style in Greencastle, and as the former residence of a prominent citizen, as well as several DePauw University Presidents. The house displays many Colonial Revival features: a balconied entry portico, multiple light sash windows, dormers, columns, corner pilasters, a gambrel roof, and a modillioned cornice.

Designed by Foltz and Parker of Indianapolis, The Elms was built in 1917 for William C. Van Arsdel, a member of a pioneer Indiana family. His father arrived in the Northwest Territory on an Ohio River flatboat in 1811, five years before Indiana became a state. The family settled in Montgomery County, where William was born on a farm in 1850. He attended Asbury University, now DePauw University, thus beginning his association with Greencastle. He then entered Indiana Law School, and soon after graduation he was active in a law practice and insurance business in Indianapolis. This was the beginning of a prominent career in business and politics. He is best known for founding Methodist Hospital in Indianapolis, one of the largest in the country, and for twice being elected to the Indiana General Assembly in the 1890's. He was also active in church affairs and owned much valuable property in downtown Indianapolis.

Around 1905, at the height of his successful career, Van Arsdel moved to Greencastle, the community where he spent his college years. He became active in the College Avenue Methodist Church. He purchased the Cupola House, which burned a few years later, and he replaced it with The Elms. It was completed in 1917, according to plans that were drawn in 1906, and Van Arsdel lived there until his death in 1922.

Three years later his widow sold the property to DePauw University. From 1925 to 1981, The Elms served as the residence of every DePauw University president, a most influential position in Greencastle. Since its founding, DePauw University has greatly influenced the economic, social, and intellectual life of Greencastle. It is a tremendous physical presence with its buildings spread over many square blocks of the town, including the heart of the downtown area. The student population makes up approximately one-fifth of Greencastle's population.

In 1928, G. Bromley Oxnam, president of the university and a prominent bishop of the Methodist Church, initiated plans for building a rear addition to the house. A drawing room and banquet hall were built to provide suitable space for large-scale entertaining and accommodation of guests. From 1933 until 1981, every important guest of the university was entertained in The Elms, and most guests stayed there. These national and world figures include Harold MacMillan, of England, Prime Minister Diefenbaker, of Canada, Nobel Prize winner and U.N. President Ralph Bunche, Vernon Jordan, David Lillienthal, and anthropologist Margaret Mead.

In 1981, DePauw University sold the house to a private owner, who continues to maintain it in excellent condition.