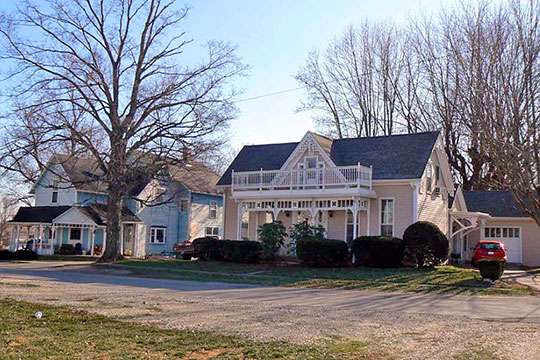 The Gosport Historic District was listed on the National Register of Historic Places in 2013. Portions of the content of this web page were adapted from a copy of the original nomination document. [‡]

The Gosport Historic District represents the founding, development, and maturity of a typical Indiana small town. It also embodies the distinctive characteristics of a variety of types of commercial and residential architecture.

The Gosport Historic District is significant for its collection of typical Midwest small town buildings representing various special functions. Private residences are intermixed with public and commercial buildings, the construction of which spans more than a 130-year period between mid-nineteenth-century vernacular and mid-twentieth-century functional styles. The district is predominantly characterized by post-railroad vernacular forms with minimal high-style decorative influences. Vernacular house forms reflect the Tidewater South and Upland South heritage of the earliest settlers, with central passage and I-houses among the earliest extant examples. Gabled-ell and T-plan forms are also found in the district. Commercial buildings range in style from Italianate to Neoclassical and include functional unstyled buildings constructed in the nineteenth and twentieth centuries.

The introduction to Gosport in 1853 of the Louisville, New Albany, and Chicago railroad made possible the transport of construction materials manufactured at distant mills, especially pre-cut dimensional lumber and high styled wood ornamentation. The manufacture and popularity of these items was the result of an explosion in the invention and perfection of wood- and metal-working machinery in the latter half of the nineteenth century in America. Especially important for the construction industry was the development of and later improvements in the band saw, which cut lumber, and scroll saw, which cut the delicate ornamental gingerbread elements popular in the Victorian era.

Because the Gosport Historic District was well-developed by 1900, with few residential building sites available, the late-nineteenth and early twentieth century revival styles, especially the popular Colonial Revival and Tudor revival styles, are unknown. The first truly twentieth century houses to be constructed are examples of the Craftsman style.

From its founding in 1829, Gosport's commercial businesses sprung up along a one and one-half block stretch of Main Street roughly between Third and Fourth St. Other buildings of a quasi-commercial use lined the west side of Fourth St. north of Main; these include the extant Brighton Poultry House and the Benjamin F. Hart Livery Stable. Over the years, important representative businesses have included the Gosport newspaper, which operated under various names; banks, dry goods, and grocery stores; drugstores; millinery and clothing stores; hardware stores; and eateries ranging from confectionery and ice cream parlors to restaurants and taverns. Recreational establishments included a movie theater on the site of the current post office, pool halls, and an opera house on the second floor of the Knights of Pythias Lodge/Opera House. The Masons and Independent Order of Oddfellows also had lodges in the downtown commercial area. Agricultural-based businesses included Havens Brothers and Bright poultry houses, Brewer's feed store, and the town feed mill.

George Carter was an independent local stone mason and builder known to have built his own limestone house at 118 W. North Street, Gosport, and the Gosport Post Office. In addition, John King, who assisted with this documentation, helped Carter build another house at nearby Lake Hollybrook in the 1950s. Carter also laid the Baptist Church cornerstone, although he did not build the church.

The Cramers of Martinsville were a family of well known traditional and highly skilled masons, with the younger generations learning the trade alongside the older generations. They built Gosport Masonic Lodge No. 92 in 1923. Archibald Cramer, the patriarch, settled in Morgan County in 1839. He was a farmer, stonemason, and preacher. His great-grandson Ira, father of eight children, was also a mason and preacher. Three of his five sons were engaged in the construction trade their whole lives, leaving behind an extensive collection of houses, commercial, and other buildings with their unique imprint in Morgan County and vicinity, as well as outside of Indiana. Among the most notable Indiana examples are the Grassyfork Office and Display Room and surrounding landscape, attributed to Julian, Leonard, and Ralph, and the Nashville House and other buildings in Nashville (attributed to Leonard). The large family lived frugally and struggled during the Depression when construction work dwindled; these experiences, together with an eccentricity exhibited most powerfully in Julian, resulted in buildings of unique creativity demonstrating handiwork ranging from ironwork, brick and stone mosaics, highly textured stucco and plaster, the use of recycled and odd materials, and unusual natural landscape features such as rock formations, which Julian termed "accretions."

The general layout and configuration of the town of Gosport reflects the influence of the United States Land Ordinance of 1785, which established the basis for the survey and sale of public land. The act created a methodology for a systematic survey of land based on a grid system of equally spaced east-west and north-south division lines, resulting in a generally uniform parceling of land with property lines oriented to the cardinal points of the compass and city blocks and individual parcels of land being fairly uniform in size or incrementally so. In Gosport, north-south streets between Sixth and First Street, including those within the Gosport Historic District, are skewed very slightly to the northwest, with east-west streets throughout the town also skewed to create square blocks and right-angle intersections. The regularity of the lot size is offset by the individual landowner's preference for architectural style and detailing in their house construction.

Another observation of note is how the Gosport Historic District has been impacted by a pattern of clustering family members in close proximity to each other. This is particularly evident at the district's southern boundary, where several interrelated families built houses. Three children of Thomas and Sarah (Robinson) Criss, who lived at 126 E. South St., built their own houses near that of their parents. Three of Sarah's sisters also lived nearby in houses of their own. After sister Eliza Grimsley's death, her house at 126 S. Fourth St. was sold to Evander and Jesse Runyan, who had the house next door at 130 S. Fourth St. built for their daughter and her family. It is this clustering that redefined and expanded the southern boundary of the Gosport Historic District.