Photo: Houses on the northern side of the 800 block of E. 58th Street, Forest Hills Historic District, Indianapolis, IN. The Historic District was listed on the National Register of Historic Places in 1983. Photographed by User:Nyttend (own work), 2011, [cc0-by-1.0 (creativecommons.org/publicdomain/zero/1.0/deed.en], via Wikimedia Commons, accessed April, 2016. 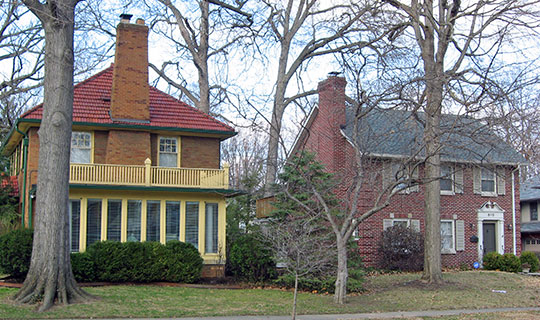 The Forest Hills Historic District was listed on the National Register of Historic Places in 1983. Portions of the content of this web page were adapted from a copy of the original nomination document. [‡]

Forest Hills is a neighborhood approximately six miles north and one mile east of Monument Circle, the center of Indianapolis. It is an area of 14 irregular city blocks encompassing approximately 72 areas. There are a total of 244 lots in the neighborhood on which there are 236 single family residences and one gas station.

The topography of the area is slightly rolling with fairly steep hills on the north-west and east central sections. Mature oak and silver maple trees line the streets in most sections of the neighborhood. Sycamore, hickory, buckeye, walnut and fir are also present to a lesser degree. Flowering crabapple, tulip, redbud and dogwood are in abundance and the neighborhood is known throughout the area for the springtime extravaganza provided as a result.

The street pattern is unique for the north side of the city with curved, intertwining streets that connect well to the regular grid pattern present at the edges of the neighborhood.

At all seven entrances to the neighborhood, the street is bracketed with brick columns five feet high and two feet square, which have fallen into partial disrepair. The older style lamp posts, found in only a few sections of the city, are made with fluted cast iron posts and sculpted globes, are placed at least two to a block throughout the neighborhood, and are in good repair. Sidewalks are present on all but a few streets. A variety of residential architectural styles are represented in the neighborhood. The primary influence is English Tudor which is prevalent throughout. Although few with that influence could be considered to be the pure Tudor design, most have been graced with more than one element of such design and done well. Many of those with this influence could be best described as English Tudor Cottage. Leaded windows, arched doorways, limestone window trim, brick construction and high pitched slate roofs are abundant. There are generous sprinklings of both American and Dutch Colonial of both frame and brick construction.

To a much lesser degree are houses with strong French and Norman influence with the curved walls at the entryway. There is one magnificent limestone French Colonial, as well. Scattered throughout are a few well done Cape Cods to round out the selection. All of the types mentioned above were built in the time span from 1924-1935, and represent 173 of the 237 structures built, or 73%. The remaining 64 are mostly of the same styles with a few additional later styles, and were built mostly in the next 10 years. They fit in very well with the rest of the neighborhood. All of the structures are being maintained in a very good state of repair.

The curved street pattern is probably the main distinguishing element of the district. All of the immediately surrounding areas are developed with the traditional grid street pattern, whereas within Forest Hills, there are curved streets and diagonal streets that bisect the regular grid pattern. The brick entrance columns and the older style lamp posts further define the edges of the district.

As a result of the irregular street patterns, there are no alleys like those found in surrounding blocks. Also as a result of that street pattern, many of the lots are irregularly shaped, rather than rectangular-shaped which is the norm for this part of the city. The terrain is naturally rolling to a larger degree than in the surrounding area; hence the name "Forest Hills."

There is a noticeably higher degree of English Tudor and English Cottage influence in the designs than is apparent in surrounding areas. Individual examples of relatively rare, single family designs are not found anywhere else nearby, such as the houses with French Colonial and Norman influences.

The Forest Hills Historic District is a marvelously cohesive and intact expression of the picturesque ideals that came into vogue in the early 1920s, both in its architecture and in its landscaping. The neighborhood is clearly distinguished from the surrounding area by the brick piers flanking its major entrances, and by the old-style streetlights gracing its curbs. It is also set apart by its curved streets, which break away from the rigid grid pattern of other area streets, and by its rolling terrain in an otherwise flat area. Although numerous other areas of the city have houses of this period and these styles, the setting in Forest Hills makes it a complete expression of the period.

In the Midwest, the 1920s saw the advent of the picturesque styles (for lack of a better term): houses, usually of brick, that featured steeply gabled roofs with massive slates or shingles, gabled entrances, diamond-paned windows (often casements), and broad exterior chimneys on the main facades. For many of them, built from standardized patterns, their inspiration was clearly medieval European. Equally popular at this time was the Colonial inspired home. Whichever style, most of these houses were smaller in scale than the Victorian or Foursquare houses of an earlier period, being only one or one-and-one-half stories high. In keeping with the "medieval cottage" idea, and their picturesque qualities, landscaping tended toward larger, landscaped lawns with an abundance of trees, and winding streets. All of these elements can be seen in the Forest Hills neighborhood, with no intrusions to detract from the original concept.

As late as 1910, the area now known as Forest Hills was a wooded tract of land known as "Stevenson's Woods." Benjamin Stevenson built the house located at 718 E. 57th Street in 1911 as a gift to his new wife, Earla (Bowers). This was the first house built in the neighborhood. The design is of Spanish influence, constructed with hollow clay tiles as the basic structure, with stucco and plaster applied over the tile. The roof is curved clay tile and the woodwork inside the house is all black walnut cut from trees felled at the building site.

Soon after his marriage, Benjamin Stevenson decided to subdivide his share of the old family holdings, which included the Forest Hills neighborhood. The plat was originally laid out as a copy of the Brendenwood subdivision, located a few miles east, with large lots and no sidewalks. The design relied entirely on the use of cul-de-sacs, as had Brendenwood. When Stevenson took this plan to the City in 1920, he was told that there was a need for more through streets if the City were to be interested in annexing the area. The plan was revised to its present appearance. The plat was added to the Town of Broad Ripple in 1922, just days before Broad Ripple was annexed to the City of Indianapolis. The sewer plan was filed in January, 1924, and was completed in September of that same year. The resulting design is a neighborhood with a cohesive ambiance not available in many other neighborhoods in the city. Its physical significance arises from the curved streets, old style lamp posts, entrance posts, and the well-conceived blending of the many different architectural styles.

Many persons of various professions who were and remain influential in the affairs of the City of Indianapolis lived in the Forest Hills neighborhood, giving it a strong cultural significance through the contributions of its inhabitants. The list of past and present residents includes bank presidents, a state senator, a former Mayor, presidents of various types of businesses, and many professional persons, such as doctors and attorneys.