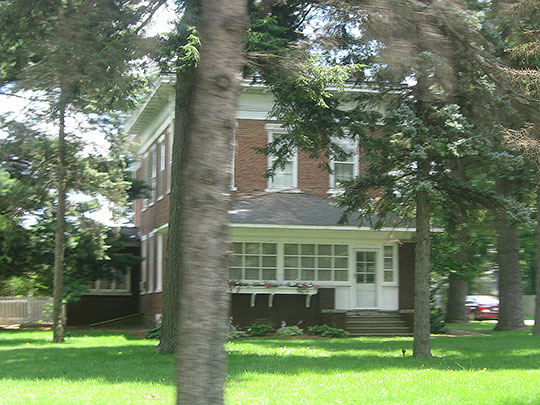 Goshen, a prosperous agricultural town, bears the unmistakable stamp of its large Mennonite population. Its industries include cabinet and veneer factories, and a plant manufacturing waterproof bags.

The Elkhart County Courthouse, a red brick structure built in 1868, occupies a shady spot in the center of the city. A large statue of Neptune on his sea horse forms a fountain in a pool in the courthouse yard.

Goshen College occupies a 20-acre campus and has seven brick buildings. The average annual enrollment is 350; courses are offered in theology, liberal arts and teacher training. This coeducational institution, the only 4-year college of the Mennonite Church in the Nation, evolved from the Elkhart Academy, founded in 1894. The academy was reorganized as a junior college in 1903.

The story of Goshen College is meshed with the history of the Mennonites and Amish in Indiana. Members of these denominations form a large part of the population of Elkhart County. The Amish, attracted by the fertile soil, arrived in 1841, and the Mennonites 2 years later, only 11 years after the first followers of the doctrines of Menno Simons reached the United States.