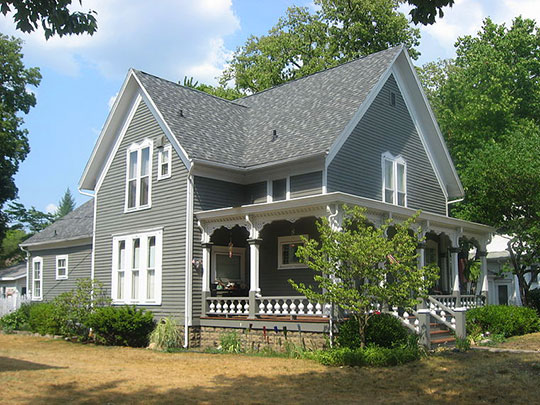 Elkhart, a city of diversified manufacturing, lies at the confluence of the St. Joseph and Elkhart Rivers. These rivers, with Christiana Creek, divide Elkhart into several sections, and it is almost impossible to go far in any direction without crossing at least one of the city's 10 bridges. At the confluence of the Elkhart and St. Joseph Rivers is a small island in whose shape the imaginative Indian saw an elk's heart and so named the island. This name was recorded by Isaac McCoy, a Baptist missionary, in 1822, and was gradually adopted by the white settlers. The site was long popular with the Indians and lay at the junction of several of their trails.

Dr. Havilah Beardsley, who had bought a section of an Indian reservation from Pierre Moran (Pierish), a Patawatomi chief, platted the town of Elkhart in 1832. Settlement started immediately and by 1835 there was a village of 50-odd dwellings and 200 to 300 inhabitants. Through the influence of Dr. Beardsley the Michigan Southern Railway Company built its shops here in 1870, and from that time on, Elkhart's growth was inseparably linked with the development of the railroad and the evolution of the New York Central system. After 1850 Elkhart grew rapidly and 23 years later was incorporated as a city. The water power attracted industries and after the construction of a hydraulic system in 1867, several small factories sprang up. In 1875, Charles G. Conn, who had been making cornet mouthpieces in his home, rented a one-room building and started the manufacture of plain brass cornets. From this beginning sprang the largest band instrument factory in the world. Nine years later, Dr. Franklin Miles established the Dr. Miles Medical Company, manufacturing proprietary medicines. These and other manufacturers have given to Elkhart its essentially industrial character.