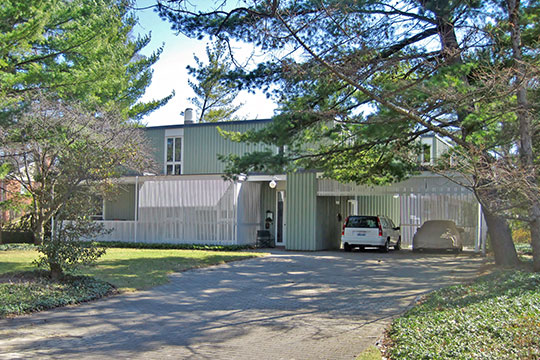 The National Register of Historic Places nomination document for the Robert and Suzanne Drucker House contains extensive information on Indian Hills Estates. The Drucker house was designed by architect Harry Weese. Portions of the content of this web page were adapted from a copy of that nomination document. [‡]

Annexation of the 1500 acres between Illinois Road and the North Shore Line that would comprise the western portion of Indian Hills Estates, occurred in April, 1926, just after the North Shore Line ran electric train track through the Skokie Valley, promoting drainage of the marshland. The subdivision was conceived and partially funded by Henry W. Drucker. His father, Robert Drucker was a real estate attorney with the Chicago law firm of Urion, Drucker, Reichmann & Boutell, who resided on Mohawk Road.

Following annexation, architect and planner Philip Maher laid out the 170-acre Indian Hills subdivision. The plan featured winding roads, a departure from Wilmette's rigid grid system, with lots planned initially to be one to two acres. It was to be a low-density subdivision, designed in the romantic tradition with homes that were designed with deep lots, facing the curving roads. Ultimately, the size of most lots was half an acre or smaller, however. The lots, which featured broad front lawns set back 50' from the street, were bordered by a public sidewalk and did have large rear yards with no alleys. The lots and streetscape were landscaped with large trees to create a park-like setting, with stone gateposts installed to mark the entry to Indian Hill Estates.

Promotional material described the future Indian Hill Estates (named after the nearby prestigious Indian Hill Country Club) as an "ideal community" of individual designed houses "estates of distinction" on expansive lots. The fashionable suburban house of the 1920s was a comfortable refuge, based on traditional architecture. Houses built by the developer, Bills Realty, were based on historical styles-Colonial, Tudor, Renaissance Revival, Spanish Eclectic; most cost at least $20,000. They were intended for executive and professional families. Henry and Mary Drucker, whose home was at 1125 Mohawk, and two of his law partners built homes in the Colonial Revival style. His was designed by Ralph Stoetzel. Other important architects designed homes in Indian Hills Estate. They included Prairie School architects Barry Byrne and Walter Burley Griffin as well as Mayo & Mayo, Spencer S. Beman and Rapp & Rapp. George Fred Keck designed 26 residences, including three for the Bills Brothers. Keck, who became famous for his solar houses, designed almost all of the houses in Indian Hill Estates in traditional styles, primarily Tudor. The final house in the subdivision, however, was Keck & Keck's 1936 International Style Herbert Bruning House. No further building activity took place in Indian Hill Estates from then until after World War II.

With movement to the suburbs having begun in earnest in the Twenties, it picked up considerably in the 1950s, after the Depression and the war. Every professional family had a car, and many became two-car families. The carport of the Drucker House was designed to accommodate two automobiles. The country was becoming less rural and primarily urban or suburban. During that time, commuting by car was easy for those living in Indian Hill Estates. On December 20, 1951, "Edens Parkway," Chicago's first expressway, opened. Located only a few miles west of Indian Hill Estates, it had three lanes in each direction. Today known as "Edens Expressway," it was named after William G. Edens, a banker, an early advocate for paved roads and a sponsor of Illinois' first highway bond issue, in 1918.

Postwar construction was considerably different from that which took place in the twenties. Utilizing technology that had been developed during World War II manufacturing-prefab window units, weather resistant plywood, latex glues and caulking, and composition board products—houses were designed that could be assembled quickly and efficiently. This happened all over the country in suburban areas. But the construction that took place at Indian Hill Estates was a far cry from the 100,000's of new units built in developments for returning Veterans. The Postwar years at Indian Hill Estates saw the construction of many single story houses, but homes that continued Bills Realty's vision of creating moderate size individual houses in an English Park setting.

Houses in Indian Hill Estates that were constructed after World War II were designed in a variety of building types and styles. Some stood two stories. Others were ranch houses and split levels. Some were based stylistically on historical styles; others were more modern in inspiration, sometimes called "Contemporary," with little reference to stylistic precedents. There are several two story houses that were inspired by Classical, Colonial or French architecture. There are also examples of Colonial Revival Ranch Houses. One is located at 1000 Ramona and one at 2025 Iroquois. There is a modern one-story house, with a two story section at 1009 Seneca. It is sided with stone and horizontal wood siding; with multiple slanted roofs. The house does not have the design continuity found in the Drucker House. There are two split levels in the neighborhood. One, which is located at 2717 Iroquois, is red brick with square multi-pane windows in each corner and topped by a hipped roof. The other may be found at 2314 Iroquois. It is a brick house, with multiple gable roofs. The 1950s and 1960s houses in Indian Hill Estate, whether traditional or Modern, fit their settings as comfortably as the older traditional homes. All are very different from the Drucker House.