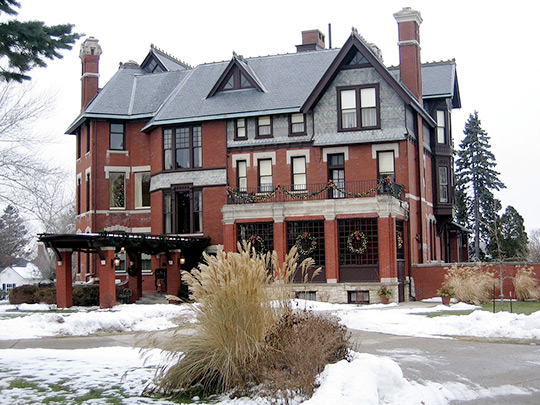 First settled about 1838, Cedar Rapids was incorporated in 1849.

Cedar Rapids, named for the swift rapids in the river at this point, is the county seat of Linn County and principal industrial center of east-central Iowa, in the midst of a rich agricultural area. The Cedar River, flowing southeast, divides the city neatly into the East and West Sides. The business district lies in a wide flat valley. North and south on the flatlands are the larger manufacturing plants, the railroad yards and shops, and other industries. On First Street at the east side of the river most of the shops are low structures of two or three stories, erected at the turn of the 19th century. They present an old-time atmosphere, difficult to reconcile with the briskness of the city and the many tall office buildings and modern hotels nearby.

The proximity of the giant Quaker Oats plant to the downtown district and the four railroads that traverse the main business section along Fourth Street, plus the fact that the Cedar River, and an island in it, are incorporated into the city plan rather than isolated from it, contributes to the sense of commercial and civic unity.

Cedar Rapids is noted for its residential districts that extend back into rolling hills on both sides of the river. So rapidly have these sections grown that the sites now occupied by modern homes were but a few short years ago pasture and woodland.

Cedar Rapids gives the impression of being uncrowded; there are no slum areas; residences are set far back from the streets and staunch old trees line the broad avenues, their branches meeting overhead to form archways of green. In the newer residential districts the streets curve and turn as they follow the contour of hill and valley.

Czechs, commonly known as Bohemians, constitute the major foreign population of Cedar Rapids, there being about 18,000 in the city (1938). The majority live in a bilingual district in the southwest end of the city, in the vicinity of Sixteenth Avenue, known as "Little Bohemia." Here they have their own shopping district where kolaches (a tart filled with cottage cheese, fruit, or poppy seeds) and other native foods can be obtained. The Czechs first came to Linn County in 1852 to work in the T. M. Sinclair packing plants and as the settlement grew they established churches, schools, and social organizations. One of their social clubs, the Reading Society, formed in 1869, later developed into a Little Theatre movement that presents plays in the native language. The Czech weekly newspaper, the Cedar Rapids Listy, was established in 1906 and in 1933 the Czech Fine Arts Society was organized to further Czech culture among the English-speaking younger generation.

The race has long been prominent in the political and civil life of the city and county. A Czech alderman was elected in 1877 and Karel Jonas, later to become Lieutenant Governor of Wisconsin, came to Cedar Rapids in 1858, along with Vojtech Naprstek, Czech patriot and Joseph Sosel, said to be the first Czech lawyer in the United States. Sosel, who was noted for his revolutionary activities in his native country, was smuggled out of Austria in a barrel, and because of his ability to speak the English language soon became legal and business adviser to the local Czech colony.

Sac and Fox Indians hunted and trapped in this region before 1838, the year Osgood Shepherd built his shack on the east side of the river at what is now First Avenue and First Street. The first survey of the city was made in 1841 by N. B. Brown, George Greene, and others who purchased squatter rights held by Shepherd. These men gave the name of Rapids City to the newly formed town.

Early in the 1840s a dam was constructed across the Cedar River, which furnished power for the grist and sawmills, already becoming lively industries. Robert Ellis, who settled on the west side of the river, built three flatboats about the same time and loaded them with 4,000 bushels of wheat for New Orleans, the first outlet for the community's farm products. The first newspaper was established in 1851 and the next year David W. King laid out the town of Kingston on the west side of the river. At this time the old ferry across the river was replaced by a toll bridge. In 1858 the citizens of Cedar Rapids launched The Cedar Rapids, a steamer built for them at Beaver, Pennsylvania. It made several trips between St. Louis and Cedar Rapids, but a collision on the Mississippi River resulted in the loss of their investment. In June 1858 the railroad reached the city and river traffic was abandoned.

With the coming of the railroad, interest turned to manufacturing and marketing. In 1870, the town of Kingston was annexed to Cedar Rapids and during the next ten years the Douglas and Stuart oatmeal mills were established, gas for illumination was installed, streetcars drawn by horses began operations, and a boulevard was opened between Cedar Rapids and Marion, then the county seat. In that decade also Henry Ward Beecher spoke to a capacity audience at the Methodist Church and William H. Seward, Secretary of State under Abraham Lincoln, stopped in the city while on a trip around the world. The following description of the town is credited to him: "Of the towns which have sprung up on the plains, we notice Cedar Rapids. During ten minutes' stay there we saw suburban cottages, with pointed roofs of the Norwegian settlers, surrounded by dark-green meadows, covered with flocks of geese and eider-ducks. We heard airs from Trovatore on a Chickering piano, in a dwelling not yet painted or plastered. We saw a Mansard mansion of the speculator in the city lots ... There seem to be all sorts of churches for all sects of Christians one surmounted with a Catholic cross, and one with a dome and minaret borrowed from a Mohammedan mosque." On December 27, 1880, Greene's Opera House was dedicated with a performance by the Emma Abbott Opera Company, and in the same year the Cedar Rapids Business College was established, with Austin Palmer, later noted for his Palmer Method of Penmanship, as one of the teachers. In the 1890s churches and schools were rebuilt and enlarged; a new post office was constructed; electric cars were introduced and the Union Station built. With the advent of the 20th century Cedar Rapids was a prosperous city. In the span of 50 years it had come from Indians to automobiles.

Perhaps the most colorful of the city's characters were the Cherry sisters—Erne, Addie and Jessie—who went on the stage at the turn of the 19th century with an act that was so poor it was good. Because of their performance the Oscar Hammerstein Theatre in New York was able to pay off its mortgage and the audiences were "laid under the seats." It is said their act was at times presented behind nets to protect the sisters from vegetables, fruit, and other missiles hurled at them. The Cherry sisters, with the exception of their one season in New York, spent their entire lives in Cedar Rapids.