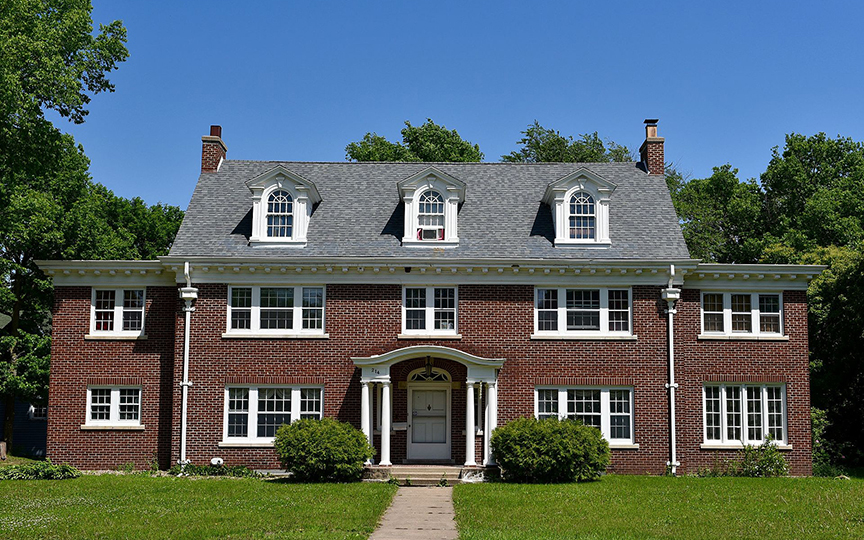 The Highland Neighborhood Historic District [†] is primarily significant for its role as the exclusive enclave for Waterloo's industrial and professional elite during the years 1908 through 1940. As such, the neighborhood is notable for its origin as a planned development, designed to meet the housing needs of the upper middle class homeowner, its unique enduring collectie sense of self identity and place over time, and its successful evolution in the face of changing economic and urban factors. Highland neighborhood is secondarily significant for its architectural excellence, primarily represented by the unusually large number of commissions which were executed by a notable Northeast Iowa architect, Mortimer B. Cleveland. Architect Cleveland was to enjoy a long-standing influence on the development of the neighborhood from its inception. The evolution in design visible in the Cleveland houses mirrors the progression of building styles in the neighborhood as a whole, providing a comprehensive survey not only of his residential work, but of popular domestic architectural styles from the first half of the 20th century, architect. Seven of the houses comprise a select assemblage of his earliest residential work, built during the opening two years of his practice.

The Highland Historic District is located on the east side of Waterloo, about two miles northeast of the city's central business district and the Cedar River. The district is about three blocks long (east-west) and 3-1/2 shorter blocks wide. It is bounded by Steely Street on the west, Independence Avenue on the south, and Idaho Street on the east, where a hospital and school form a strong boundary. The northern edge of the district is established by Highland Park, and a row of railroad tracks.

Highland's history begins with its birth during Waterloo's boom era. Spurred by rapid industrial growth, the city's population doubled between 1890 and 1900, and was to more than double again before 1910. Housing demand was great, and speculative ventures were rampant. In this climate of expansion, two men initially recognized the potential value of the land which became Highland.

John Steely was a real estate broker. Lewis Lichty had begun his career as a lawyer upon his arrival in Waterloo in 1864, and had served as mayor of the city. The empty tract they purchased was known locally as "the sandhill where they bury dead horses." It was undeveloped farmland, bordered to the north by a dozen shacks put up along the Great Western railroad tracks to house rail workers. On February 4th, 1901, Lichty and Steely filed a plat encompassing the top of the barren hill. The area platted was approximately half the size of the present district. The name for the new addition originated with Lichty, whose family homestead in Sommerset County, Pennsylvania had been named "Highlands". The two men opened an office for their Highland Land Company in the Century Building in 1905. Lewis Lichty's son, Harry B. Lichty, joined the company as secretary. H.B. had connections in the real estate and abstract business. Some lots were sold, but the Land Company lacked the capital needed to fully develop the addition. Another tenant on the top floor of the Century at this time was The Columbia Club, an East Waterloo businessman's organization which numbered Frank J. Eighmey, Frank J. Fowler, and Edmund E. Manhard amongst its membership. Eighmey was president of the First National Bank. Frank Fowler headed The Fowler Company, a wholesale grocery operation established in 1869 and one of the principal firms in Waterloo. Edmond Manhard, already connected with the Lichtys by reason of his position as manager of the Lichty-owned Waterloo Canning Company, was a close friend of both.

The new street plan limited access from Independence Avenue, forcing traffic into the district to funnel through the formal entrance at Highland Boulevard. The design of the replat was intended to physically define the district as a distinct area, resulting in a contained space with a strong focus on its central core. The barrier effect inherent in the design of the plat, coupled with the distance factor contingent in the district's suburban location, produced the image of Highland desired by the Improvement Company. A 1909 Waterloo Courier stated, "The entire tract has been platted in such a way that the whole section forms a complete residence portion with a distinct local style, marking it from all other districts ..."

The Highland District is exclusively residential. Construction in the district began in 1900 with a single residence on Independence Avenue. By 1942 all but fifteen houses had been built. Independence Avenue, and portions of Prospect and Alto Vista adjacent to Highland Square were the first streets to be developed. The earliest remaining house on Independence Avenue dates from 1906. The last was built in 1947, with houses from the 1920's and 1930's predominating. Except in the 300 block where homes date from 1936 through 1942, Alta Vista and Prospect developed mostly from 1908 until the Ia1e 1920's. On Vine, houses were built from I9IO until 1942, when the outbreak of World War II virtually ended construction throughout Highland. The oldest houses are found on Independence Avenue and in the 800 block of Steely Street. Construction began In the district cenler in 1908 with a general outward direction. Peak years of building occurred during the opening of the district from 1908 through 1914, in 1924, and in the last construction phase of 1937 through 1942.

Highland's appearance has remained largely unchanged since the end of its late I930's building boom. The streetcar station and the archway disappeared sometime during the early Depression years. The most significant alteration to Highland occurred in the early I960's when Dutch elm disease decimated the neighborhood tree population, greatly altering the character of the district (refer to Continuation sheet 8-35). Although the near-perfect canopy of shade the elms produced cannot be duplicated, replanting with varied species is progressing. Only one house has been lost; 1068 Independence was torn down in 1941 to make way for a home built by the grandson of Highland's earliest family, the Wills. Due to the activities of Highland, Inc in the mid 1930's, there was no possibility of contiguous expansion of the neighborhood. As a result, the growth of Waterloo to the east bypassed Highland.

The houses of Highland are principally of frame construction, with exteriors variously of clapboard, stucco, shingling, aluminum siding, rolled asphalt, and brick or stone facing. On the whole they are conservatively designed, the majority representing offerings of builders' and developers' catalogues and other agents of mass production. At least 39 houses in the district were designed by local architect Mortimer B. Cleveland. Stylistically, the district includes examples of the turn of the century Georgian, Colonial Revival and "hipped box", a variety of houses based on Prairie School and Craftsman ideas and an assortment of Cape Cod Cottages, Dutch and New England colonial revivals and "medieval" (generally Tudor) revivals. Style, particularly in the later houses, is expressed primarily through application of a few details; a high gable roof and diamond-light windows represent the "Tudor"; a pedimented doorway framed with plan pilasters, and sometimes an overhanging second story, for the "colonials". The most distinctive houses are generally from the early decades of the district,