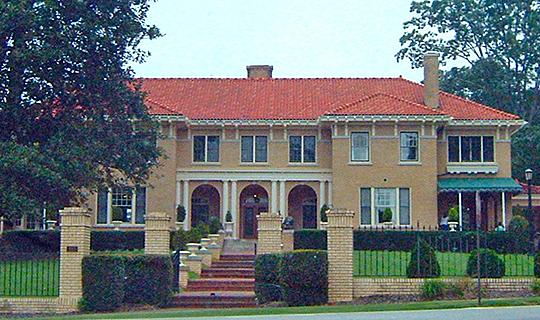 Buford's first settler was Silas King, a Baptist clergyman from South Carolina who purchased 250 acres here in 1822. He built a cabin which eventually became the first hotel.

Buford was Gwinnett County's industrial heart for more than half a century. It had become known internationally as "The Leather City." It began when R. H. Allen opened a leather tanning operation here in ca. 1871. The railroad came through about the same time and a city grew rapidly along its tracks. The Town of Buford was incorporated in 1872. The Bona Allen Company drove the local economy and by the 1920s was in its glory producing saddles, harnesses, collars and branching out into producing shoes. The company was so successful it expanded into dry goods, groceries and lumber. The Allen Company began a gradual decline after World War II, with the company finally closing its last operation about 1981. [Buford, Rich in History, the Buford Business Alliance, www.visitbuford.com, accessed August, 2012]