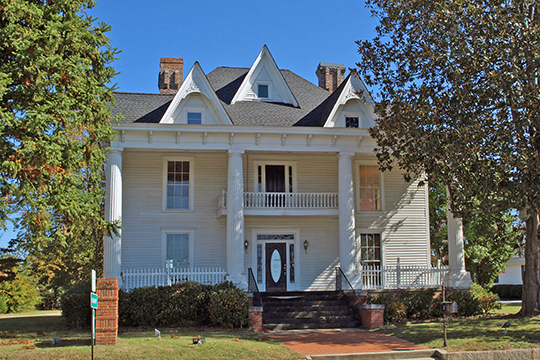 The North Broad Street Residential Historic District was listed on the National Register of Historic Places in 1984. Portions of the content of this web page were adapted from a copy of the original nomination document. [‡]

The North Broad Street Residential Historic District represents the intact portion of a historic in-town neighborhood made up of nineteenth- and early twentieth-century houses. The district is irregular in form and developed adjoining the commercial section of town. North Broad Street runs toward the northeast and is in the eastern part of the district. Lots are generally rectangular in shape, some being larger than others. The major boundary streets, North Broad and Midland Avenue, have a curvilinear path that causes the land subdivision to be a modified gridiron pattern. The terrain does not affect the subdivision. The houses sit back from the street and face the streets at right angles. Most lots have houses. Houses range in size and style from small Victorian frame cottages to a large Victorian frame house with decorative shingle work. There are also turn-of-the-century Neoclassical-styled structures with monumental columned porticos, along with Bungalows and a few 1930s brick Tudor style houses. The only non-residential structure is a brick, Gothic-styled First Baptist Church. Most of the houses are wood framed, weatherboarded and detailed with appropriate wood trim, and most feature front porches. The front yards are informally landscaped with trees, shrubbery, lawns, and other features. The streets have curbs, sidewalks, and some street trees. There are a few intrusions and a few non-historic structures in the district.

The North Broad Street Residential Historic District contains good examples of local adaptations of prevailing architectural styles over a fifty-year period. The Victorian styles range from small Victorian Cottages to the ornate 1902 Smith-Baxter House, where decorative scrollwork, turned balusters, shingles, stained glass and large porch are all included. The Neoclassical style is exemplified in the Woodruff and Jackson houses. The majority of houses are in the Bungalow style and are typical of that national movement in style and material. The First Baptist Church is a good example of the use of the Gothic style for a church. In landscape architecture, the district is significant for its residential landscaping features that distinctly set it apart from the commercial area of Winder. Large trees, shrubs, hedgerows, flowers, and large lots are all used to create a green, almost rural environment. This type of landscaping is typical of the late-nineteenth century and in keeping with the influence of the Romantic movement. The district is significant in local history because the residents came from various walks of life and contributed to the economic, social, political, and religious life of Winder. Development in the Winder area began as early as the 1790s, when settlers moved into the region. Originally called Snodon, the village name was changed to Jug Tavern—a name it would keep the better part of the nineteenth century. Jug Tavern, incorporated in 1884, was located where Jackson, Gwinnett, and Walton counties met. Development at this time was concentrated near the present-day central business district.

In an effort to help the town grow and prosper, Dr. W.H. Bush worked to bring the railroad to Jug Tavern. By selling some of his land very cheaply, Dr. Bush first brought the Gainesville-Midland Railroad to town in 1884. This line, from Gainesville to Social Circle, ran down Midland Avenue, north of the present-day central business district. The Gainesville-Midland not only brought the first signs of prosperity to Jug Tavern, but its location pulled development to the north. One of the earliest examples of this new development was the Camp-Rainey-Strickland House. This one-story frame Victorian cottage was built in the late 1800s, originally facing North Broad Street. It was to be a harbinger of the future residential development that would occur in the North Broad Street area.

While the Gainesville-Midland Railroad was an important line for Jug Tavern, the coming of the Seaboard Air Line Railroad in 1892 spurred tremendous growth in the town. This line opened up important regional markets such as Athens and Atlanta. Because of the importance of the railroad to the community, Jug Tavern's name was changed to Winder in 1893, in honor of John H. Winder, general manager of the Seaboard.

Growth came quickly with the opening of the railroad. By 1895, Winder had a population of 1,200. A commercial center began developing along Broad and Jackson streets, between the two railroads. Residential areas took shape around this commercial core. One of the most important of these areas was centered along North Broad Street.

At the turn of the century, a number of important houses were under construction in the North Broad Street district. J.H. Perry, a leading businessman in Winder, constructed a frame, two-story house on the corner of Midland Avenue and Center Street from 1900 to 1902. This large residence has both Victorian and classical elements, and an interior that features wood gingerbread trim, plaster walls, and seven original mantles. The Perry-Smith-Brookshire-Jennings House was later purchased by John Smith.

Two other important residences of the period were both Neoclassical in design, with very formal facades and monumental porticos. One block north of the Perry-Smith-Brookshire-Jennings House on Center Street is the J.M. Jackson House, built circa 1900. At about the same time, G.W. Woodruff was the founder of the Woodruff Hardware Company and the Woodruff Machinery Manufacturing Company. He was also a partner in the Winder Manufacturing Company and the Carwood Manufacturing Company. Interested in promoting Barrow County, he founded the North Georgia Fair in 1912. In his later years, he served as a member of the state legislature.

Across the street from the Woodruff House, another prominent Winder citizen built his large residence. Green W. Smith was both a planter and merchant who was involved in the development of Winder. In 1902, the Barber Brothers of Commerce, Georgia, erected a large Victorian mansion for Smith. The Smith-Baxter House featured a two-story wrap-around porch, decorative shingles, and extensive woodwork. In later years, prior to his death in the 1920s, Smith served as president of the local telephone company, which was founded in 1900 by T.C. Dunn.

With the growth of the community, churches also increased in number. One of the South's largest denominations, the Baptists, moved into the growing North Broad Street area. Established in 1893, the First Baptist Church of Winder moved to North Broad in 1908. From 1907 to 1914, they constructed the present stone-and-brick Gothic structure on the corner of North Broad and Stephens streets. The building cost $20,000 and originally featured several small spires on the corners of the two towers. Alterations were made in 1930, 1955, and 1960.

The first three decades of the twentieth century saw an extension of a number of city services in Winder that affected the North Broad Street district. A volunteer fire company was organized in 1908. The following year, a waterworks and electric-light plant were constructed. Broad Street was paved in the 1920s, and in January, 1924, the city approved $30,000 in bonds to improve and extend the streets, electric-light, and water systems. This growth led to the 1914 establishment of Barrow County, with Winder designated as the county seat. The 1910s brought an increase in modest housing in the district. Several bungalows were built at this time, as the style became popular across the nation. The Mayne House on North Broad Street is an early example of the type. Mr. Walker Jackson built a bungalow on Center Street in 1913, while the Hodges-Thompson-Kelly House is an elaborate, two-story brick bungalow built in 1915 on North Broad Street. Other modest housing, in traditional cottage or American foursquare styles, can be found throughout the district. Some of these homes belonged to Winder's professional class, such as dentists (Dr. Williams) and bankers (C.O. Maddox, Sr.). A major builder of residences in the community during this period was the Winder Lumber Company.

Although much of the development in the North Broad Street district predates 1920, a few large homes were built late in the 1910s or early in the 1920s. The Camp-Jones-Tuck House is one example. In 1919, the Camp-Rainey-Strickland House was moved to face Stephens Street and the Camps built their large residence across from First Baptist Church on North Broad Street. The two-story brick building has a very formal, classical facade and a tile roof. A similar house stands one block away at the corner of Stephens and Woodlawn streets.

During the 1920s and 1930s, development in the North Broad Street area consisted of infill housing, as the neighborhood stabilized. Bungalows and other simple houses were first used as infill. In later years, the Tudor style became popular. By the mid-1930s, the district existed much as it did today.

Development during the 1950s, 1960s and 1970s has greatly affected the boundaries and edges of the district. During that time, the central business district spread north, reaching into residential neighborhoods. Today there is a sharp break at Stephens and North Broad streets between the commercial and residential sections. New development also took housing along Woodlawn, isolating the large Jackson House at the corner of Midland and Woodlawn. North and east of the district, new housing and neighborhood commercial uses were developed. However, despite this pressure, an important, intact historic residential neighborhood remains in Winder today in the North Broad Street area.