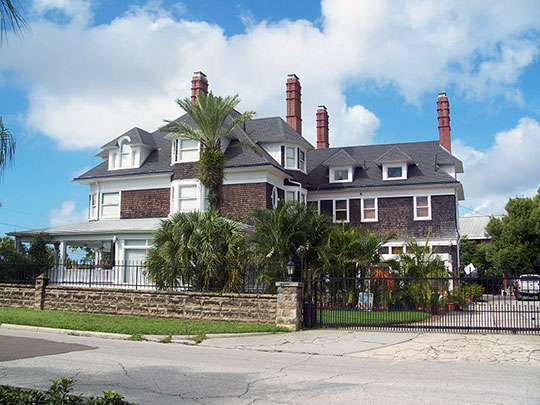 Tarpon Springs, sponge capital of America, lies at a point where the Anclote River widens into palm-fringed bayous on its way to the Gulf. The streets of the town are paved with brick; its restricted business section is characterized by brick and stucco buildings with permanent awnings. Tarpon Avenue, the town's main thoroughfare, begins at the Municipal Pier on the Gulf, encircles Spring Bayou, passes close to the tourist center, becomes a two-block shopping district, and wanders on through scrub palmetto and truck gardens to the steep banks of Lake Butler on the east.

The town was founded in 1876 and named, it is said, because of a mistaken belief that tarpon spawned in Spring Bayou; but the fish seen splashing in the water here, as well as in the river and numerous lagoons, are mullet, for the most part. Early settlers built their homes around the spring; almost hidden by trees and bright subtropical foliage, many still stand, contrasting sharply with more modern houses. The shell paths that once followed the marshy banks of the bayou have been replaced with wide cement promenades and a sea wall.

Hamilton Disston, saw manufacturer of Philadelphia, whose purchase of 4-million acres in the early 1880s included much of the territory in and around Tarpon Springs, persuaded influential friends to join his settlement here on the high wooded shores of Lake Butler. To accommodate them, he built a hotel that for a decade was the lone fashionable resort on the Gulf coast. On 30 pine-studded acres overlooking the lake, the Duke of Sutherland, having deserted his family in England, built a clapboard manor house in 1889, and for 2 years lived the life of a Florida planter with a woman of his choice, a commoner, whom he later married. For this he incurred the displeasure of his cousin, Queen Victoria, and won headlines in the press of two nations.

With the perfection of deep-sea diving equipment in 1905, a colony of Greek sponge fishermen abandoned the waters off Key West and their method of "hooking" sponges with long poles in shallow water, and came here to fish far out to sea, using divers to gather the sponges. Because of their willingness to remain at sea for long periods, their courage in overcoming the hazards of their craft, and their sound marketing methods, they have made Tarpon Springs one of the largest sponge markets in the world. As in other fishing communities, the life of the Greek colony centers around the docks, on the Anclote River, to which 70 or more boats in the fleet bring their catches.

When the fleet departs a bearded priest of the Greek Orthodox Church blesses each boat, and the air is filled with the calls and farewells of friends and families of the fishermen. While it is away, the houses clustered around the docks look like a discarded stage set. The only stir is in the stores, restaurants, and a few curio shops. But four times a year, barring storms, the fleet turns homeward with its cargo of sponges — always for Epiphany services, always at Easter, and then the whole community assembles to greet it. The gaily-painted boats come slowly up the Anclote channel, their decks heaped high with sponges; soft rubber diving suits dangle grotesquely from the stays. Blue and white pennants fly at the mastheads, and the Stars and Stripes at the sternposts, and lettered high on the bows are such names as Venus, Apopllo, Venizelos, or Bozzaris, the last for the doughty Greek patriot who "slew a thousand Turks before breakfast." As the boats are warped in and tied up, the docks and narrow lanes about them ring with music, laughter, and the rhythm of folk dances.

On a slope overlooking Spring Bayou, George Inness, famous 19th-century American landscape painter, built a house and studio in 1877. Noted for his harmonious and placid representation of nature, he found the landscape of this section inspiring. His son, George, Jr., is known principally for religious paintings, a number of which hang in the Church of the Good Shepherd, Grand Boulevard and Read Street.