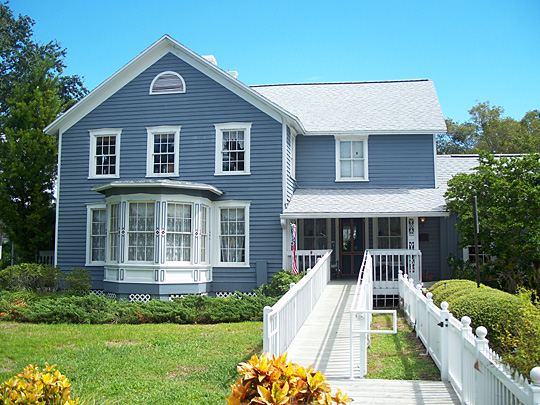 Dunedin is a residential town that merges with Clearwater, extends more than 3 miles along St. Joseph's Sound, locally called Dunedin Bay. Numerous public and private piers along the waterfront offer facilities for boating and fishing. Originally called Jonesboro, the town was settled in the late 1850s. In 1878, with the establishment of a post office, it was given its present name by J. L. Douglas and James Somerville of Dunedin, Scotland. The little Episcopal church here was the scene of the wedding of the Duke of Sutherland and Mrs. May Carolina Blair, of London, in 1888.

Before the railroad penetrated this area, Dunedin was one of the chief Gulf ports between Cedar Keys and Key West. Early fruits and vegetables were shipped in barrels by schooners; at that time oranges sold for 1-cent each, f.o.b. the dock. Citrus raising and packing, grapefruit-canning places, a plant that manufactured canning and packing house machinery, as well as equipment of overhead irrigation systems, provide a substantial part of the income of the town.

The Dunedin Yacht Club has a clubhouse, dock, and boat slips. Sailboat races are held during the year on the sheltered bay. Dunedin Isles, a boom-time development along the waterfront north of the town, contains several fine estates, extensive flower nurseries, and an 18-hole golf course.