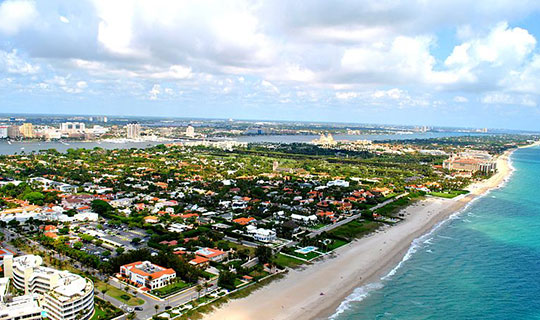 Palm Beach is an exclusive resort town on the northern end of an 18-mile island between Lake Worth on the west and the Atlantic Ocean on the east. At no point is the island wider than three-quarters of a mile, and in places it is only 500 feet. Three bridges connect the city to West Palm Beach and the mainland; the concrete Flager Memorial Bridge on the north, which replaces the wooden railroad trestle that led to the grounds of the now vanished Poinciana Hotel; the imposing South Bridge in midtown, a continuation of Royal Palm Way; and the Southern Boulevard Bridge, which leads from the Bath and Tennis Club to the main highway that penetrates a section of the Everglades.

Royal Palm Way, the city's landscaped boulevard and principal east-west thoroughfare, extends from Lake Worth to the Atlantic Ocean, a three-quarter mile avenue bordered by double rows of royal palms. It divides a two-mile area that contains the business district, schools, clubs, brokerage offices, and unpretentious homes of year-round residents.

Worth Avenue, at the widest part of the island and the southern extremity of the shopping district, is a four-block street of smart shops, including branches of metropolitan stores. Lined by Australian pines and scarlet-flowered hibiscus, Wells Road forms the northern limit. North and south of this area are rich estates surrounded by vine-cloaked walls raised high to insecure seclusion.

The restrained magnificence of these properties is the result of lavish expenditure, expert landscaping, and continuous care. They embrace acres of terraced lawns and formal gardens, dotted with tiled swimming pools and fountains, and glorified by exotic plants. Many of the flowering trees and shrubs are imported from the remote corners of the earth, and the ensemble has the variety and beauty of a tropical arboretum.

County Road, also known as Palm Beach Avenue, the city's main north-south highway, passes between many large estates. Front-page names are on many ornate gateways, but passers-by see little of the homes and only rarely the occupants. Lake Trail, paralleling the east shore of "Lake Worth for several miles, a jungle-shaded lane beneath the palms, is reserved for pedestrians and two-wheeled wicker chairs, mounted on the front end of bicycles, accommodating two persons. The lake, actually a salt-water lagoon and a section of the Intracoastal Waterway, was named for Brigadier General William J. Worth who served in the Seminole War. Barely half a mile wide, the gleaming blue water of the basin is, in season, a mirror for the many craft anchored there.

Wide, palm-fringed Ocean Boulevard, the resort's motorway and promenade, extends along the Atlantic and affords an unobstructed view of the ocean and tumbling surf. Many of the homes have passages under the boulevard, giving access to private beaches. A five-block ocean frontage between Brazilian and Hammon Avenues includes the public beach, swimming pool, casino, and a fishing pier.

Barely three miles off Palm Beach, its nearest approach to America's shores, the Gull Stream runs 70 fathoms deep, while 30 miles out it reaches 400 fathoms. The current is so powerful that southbound vessels keep to its western edge, and white liners, rusty cargo ships, and oil tankers pass in review almost within hailing distance of the coast. Palm Beach is regarded as the winter counterpart of Newport—cosmopolitan, individual, and independent. Its habitues constitute a fragment of international society seeking June in January and the pleasures afforded by right of social prestige and heavy purse. A municipal ordinance rules that all building operations cease by the middle of December so that incoming residents will not be disturbed, and the town planning board sees to it that trees and shrubbery are pruned, parkways cleared of rubbish, and beaches groomed.

A vanguard of servants descends from the North in December to set the stage. With the new year, private railroad cars are parked on West Palm Beach sidings and sumptuous houseboats and yachts from distant ports moor in the sheltered waters of Lake Worth. Hotels offer every luxurious accommodation, but permanent winter residents have their own estates. For the organized coterie the social whirl spins as regularly as the clock. The official day begins at eleven on the private beaches when the nomad citizenry assemble to devote a few hours to recuperation, and seek a coveted sun tan. During this period the ocean front is a panorama of brilliant bathing togs, bronzed bodies, painted wind breaks, and gay umbrellas. Luncheons, accompanied by music, are served in cabanas and upon canopied terraces that flank sea-water pools.

Restricted to members and their guests are a faultless golf course, many fast tennis courts, Bradley's Casino, and numerous clubs. At all times there are yachts cruising to remote Florida keys or the Bahamas, planes for Nassau and Havana, sea sleds for brief excursions up shallow tropical rivers and canals, motoring to Miami race tracks, and speedboats on the lake. But fishing remains the supreme sport, and quest of the valiant sailfish in the Gulf Stream provides the acme of thrills, a challenge to the skill and endurance of the deep-sea angler.

To lend zest to the eternal round of entertainment is the resort's winter colony of celebrities of stage, screen, and radio; playwrights, songsmiths, and producers. The annual charity benefits staged by the community, to which these stars contribute their services, are perhaps unrivaled in amusement circles. But with the ides of March gaiety ends and the city becomes a ghost town given over to caretakers and artisans, its homes shuttered, its shops closed, its beaches practically deserted.

For many years no wheeled vehicles, with the exception of bicycles, were allowed in the city. Later motorcars were admitted, but rolling chairs and bicycles are still the popular conveyances. There are no commercial parking lots or tourist camps, and the parking of trailers is limited to one hour.

To those of the literary world, many of whom are winter residents, Palm Beach has furnished alluring backgrounds. Joseph Hergesheimer's Tropical Winter has captured much that is characteristic of the city and its people. The island and environs have been the locale for numerous articles and short stories, and for novels by Elmer Davis, Arthur Somers Roche, and Ethel Pettit, his wife, and others. Prominent artists of magazine and newspaper fields make the city their winter vacation ground; matched with nationally known sports writers and novelists, their annual golf tournament is an event.

The early architecture of Palm Beach, running to steep-roofed, gable-typed frame houses with cupolas and turning-lathe ornamentation, was dominated by mammoth wooden hotels painted in the prevailing Flagler white and lemon yellow. Magnificent concrete structures have supplanted pioneer hostelries, but a few of the residences remain, some still occupied by owners who prefer their shingle-walled dwellings to the palatial estates that surround them.

It was Addison Mizner, artist-architect, prize fighter, and miner, who, shortly after the World War, introduced the Spanish vogue that resulted in a transformation of architecture along Florida's lower east coast. Mizner's houses, built with courtyards on various levels, were replete with arcades and lofty galleries; rooms featured exposed rafters and vaulted ceilings; tiled pools and mosaic murals resembled those of Pompeii. To obtain materials needed for his creations, Mizner established plants for the manufacture of tile, ironwork, furniture, and pottery. His pioneer Florida effort, the Everglades Club, was responsible for commissions to design homes for the Stotesburys and Vanderbilts, for Rodman Wanamaker II and Drexel Biddle Jr.

Following the boom, with its extensive building program in the city, the Mizner vogue passed, and the British-Colonial-type house became popular; the pastel shades of the Mediterranean were in part replaced by the oyster white of the newer designs and by less bizarre ornamentation. Among more recent examples classed under the general term of Tropical Colonial are the West Indian and Bermudan, with whitewashed walls and green shutters.

Settlement of the Palm Beach area was of comparatively recent date; neither the Spanish, during three centuries of almost unbroken rule, nor the English left their imprints upon the lower east coast. It was not until the War between the States that Lang, a Confederate draft dodger, settled in what is now Palm Beach and built the first house. Lang vanished at the close of the war and in 1872 Charlie Moore from Miami took over the property. Others followed, and by 1873 four families had settled in the vicinity. Captain Elisha Newton Dimick, known as the founder of Palm Beach, reached the island in 1876 and built a house on land purchased from the State at approximately $i an acre. His holdings, together with his father's, are a part of the property now occupied by Colonel Bradley's Casino and the Whitehall Hotel. Two miles of ocean front extending from what is now Sunset Avenue to McKenna Place, homesteaded by Melville Spencer of Pennsylvania in the early 1870s, was sold 40 years later to Samuel Untermeyer, New York lawyer. The land homesteaded by Captain Albert Geer was sold to Henry M. Flagler for $75,000 and became the site of the Royal Poinciana Hotel.

The resort proper perhaps owes its existence to the wreck of a Spanish barque in 1878. The vessel's cargo of coconuts washed ashore and took root; early settlers gathered many nuts and planted them on their property, and in time the barren sand key was transformed into a patch of South Sea loveliness.

After years of receiving mail in haphazard fashion, in 1880 the settlers were granted a post office under the name of Palm City. Afterwards, discovering that another town in the State had a prior claim to the name, the settlement was rechristened Palm Beach.