Photo: House in the Dunnellon Boomtown Historic District, Dunnellon, FL. The Historic District was listed on the National Register of Historic Places in 1988. Photographed by User:Ebyabe (own work), 2007, [cc-by-3.0 (creativecommons.org/licenses/by/3.0)], via Wikimedia Commons, accessed October, 2016. 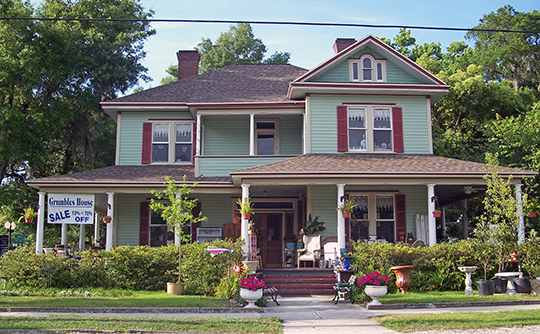 The Dunnellon "Boomtown" Historic District was listed on the National Register of Historic Places in 1988. Portions of the content of this web page were adapted from a copy of the original nomination document. [‡]

The Dunnellon "Boomtown" Historic District is a small, primarily residential neighborhood whose period of significance coincides with Dunnellon's prominence as a hard rock phosphate mining boomtown and regional trade center, 1887-1920. In addition to residential construction, there are several churches in the district, two of which are contributing.

The district is located in southwest Marion County, in the original "Town of Dunnellon," north of the Withlacoochee River and west of the commercial area along Williams Street. It contains 14 partial or complete blocks that are defined by some of the earliest streets of the original town. Those running east to west, and moving north from the Withlacoochee River toward the phosphate pits are: West Pennsylvania Avenue, Walnut Street, Chestnut Street, Park Avenue, and McKinney Avenue. Streets running north-south and moving west from the commercial area are: Illinois Street, North Ohio Avenue, and Cedar Street.

Before the discovery of the area's phosphate resources in 1888, Dunnellon's development was focused on the newly completed Silver Springs, Ocala and Gulf Railroad which ran east of the present district. The earliest building within the district is the Renfro Boarding House. A frame vernacular building with scalloped rafter tails, it was constructed ca. 1887 at the intersection of Illinois Street and West Pennsylvania Avenue to provide shelter for the railroad workers. In 1903, it was moved west along West Pennsylvania Avenue to its current site at 108 West Pennsylvania Avenue to make way for the Dunnellon Hotel. The hotel was demolished in 1952. As the oldest building, the Renfro Boarding House is one of the most historically significant resources in the district. Although it has been altered with the addition of asbestos siding, the enclosure of the upper front porch, and the insertion of new windows, it essentially retains its original configuration. It, therefore, is a contributing property in the district. Following the phosphate discovery, "boomtown" fever was high, and in the rush to riches, little thought was directed toward housing. Dunnellon never really separated the white and black communities. Shacks for the mostly black workers were constructed near the mines and camps, intermingled with more substantial cottages for the mostly white foremen and mine owners. This early 1890's residential development occurred along McKinney Avenue, but few of these homes have survived. Those that have survived are in such altered or deteriorated condition that most are excluded from the district. Many of the early contributing houses in the district were built by John Waters, a local carpenter. Most of them were frame vernacular, cottages or "L" plan farmhouses. The vast majority of the houses have one story, though a few have 1-1/2, 2, or 2-1/2 stories. Almost all have gabled roofs; a few have hipped roofs. The front elevations usually have attached porches, though some of the more elaborate homes have wrap-around verandas. Windows are generally double hung sash of various configurations. Waters used hard yellow pine which was prevalent in the area. Cedar shake shingles were used as roofing material; siding was shiplap or beveled wood.

From the late 1890s to the 1910s, development built up along West Pennsylvania Avenue, Walnut Street, Chestnut Street, and Park Avenue. Much of this area has remained intact with a concentration of Victorian frame vernacular houses. Gingerbread and decorative shingles adorned these houses, reflecting the prosperity of the mining town.

Examples include the Black/Gresham House (ca. 1910) with six gables at 318 Walnut Street; the Gingerbread House (ca 1910) at 214 Chestnut Street; and the Bosewell House (ca. 1895) at 312 Park Avenue. Clusters of houses built on the same plan are another characteristic of the district, including five "L" houses on Walnut, four cottages on Chestnut, two "I" houses on Chestnut, and four "L"'s on Chestnut. Many of these clusters were built as rental units. 1910 also saw the application of some Classical Revival elements to the frame vernacular style. The Grumble House at 218 Walnut Street is an example.

The Historic District also contains many Bungalow style residences, dating from the early 1900s to ca. 1918. Examples are the Baskin-King House (ca. 1908) at 202 N. Ohio Avenue, and the house at 303 Park Avenue.

Entire buildings were sometimes moved into town from mines which closed as the boom subsided. The Chaulker House (ca. 1900), originally a commissary/residence at the Kibler Phosphate Mine, was moved to 301 Chestnut Street ca. 1916. An important part of life in the Dunnellon "Boomtown" Historic District was represented by its churches. The Dunnellon Presbyterian Church was organized in 1893. The Victorian Gothic frame church at 114 Chestnut Street, with a bell tower/steeple and Gothic stained glass windows, was constructed in 1895. Other denominations also used the building until their own sanctuaries were built in the early 1900s. The original Methodist, Baptist, and Roman Catholic churches were built in the Victorian vernacular style. These have all been demolished or replaced with modern buildings. Church groups also held services in a frame school building at the corner of Illinois Street and McKinney Avenue, which was also the site of the December 1890 meeting held to decide to incorporate Dunnellon. The school building was later used by the Beulah Baptist Church whose congregation replaced it in 1920 with a Colonial Revival influenced concrete block edifice with red brick arches over the doors and windows. Thus, the two contributing church buildings mark the early development and the final demise of Dunnellon's phosphate boom era.