Photo: House in the Boomtown Historic District, Dunnellon, FL. The Historic District was listed on the National Register of Historic Places in 1988. Photographed by User:Ebyabe, 2007, [cc-by-2.5 (creativecommons.org/licenses/by/2.5/deed.en)], via Wikimedia Commons, accessed September, 2015. 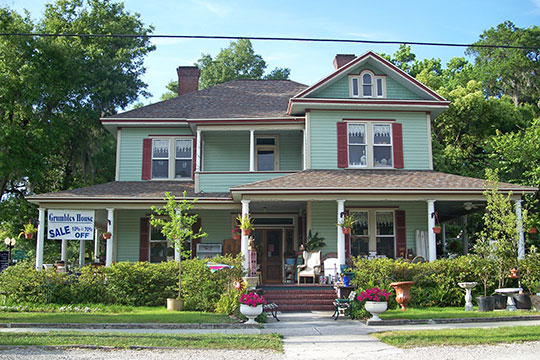 Dunnellon, on the north bank of the Withlacoochee River, is a compact little town of square-fronted business buildings, with arcades along the sidewalks of the main street; the shell-paved side streets of the residential section are arched over with huge oaks. The discovery of limestone deposits in the vicinity in 1889 brought prosperity to Dunnellon, and since that time the mining and shipping of phosphate and limestone rock have been a leading industry. Some of the larger mines are owned and operated by Belgian interests.

In the early 1860's the town was a lively trading center for planters and stockmen of the surrounding areas. Although some cattle are still raised, turpentine, lumber, truck, and dairy products, along with limestone, are the town's principal sources of revenue.

Along the banks of the Withlacoochee River, lined with primeval forests of cypress, magnolia, giant oaks, palms, wild cherry, and gum, fishing and hunting camps are numerous. In this district General Edmund P. Gaines, en route from Fort King to Fort Brooke, attempted to cross the river in 1836. Refugee Negroes in this region, led by a Negro named Ino, joined forces with Osceola and his men, and made a sudden and vigorous attack on the Government troops. Stunned by the surprise assault, Gaines threw up a breastwork of logs and sent a messenger to General Duncan Clinch at Fort Drane, asking for reinforcements. Ten days later, when Gaines and his men had been forced to eat all their horses, John Caesar, one of the Negro leaders, approached the camp and asked for a parley. Osceola led the peace delegation to the army encampment, and, as the conference began, General Clinch arrived on the scene and immediately opened fire. Two Indians and one Negro were killed; the survivors broke and fled, charging bad faith.