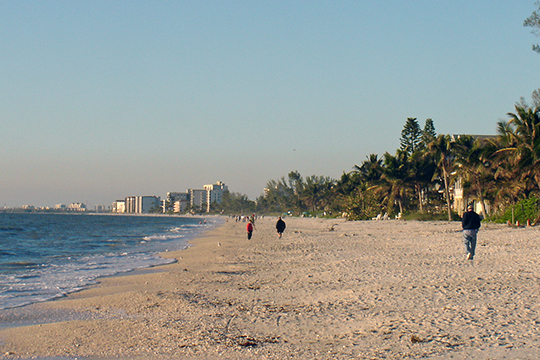 The area known today as Bonita Springs is a city of over 41,000 people, sited between the two expanding cities of Fort Myers and Naples. Bonita Springs historically fell within the habitat of the Calusa Indians. Archaeological excavations on the Imperial River, which runs through Bonita Springs, have revealed numerous Calusa artifacts. Although the Spanish made several attempts to gain a foothold on the western coast of Florida, there is no evidence that their failed attempts ever reached as far as the Bonita Springs area. According to local historian E.P. Nutting, the American history of the area now known as Bonita Springs began when U.S. Army Corps of Engineers surveying teams were sent there during the Seminole conflicts of the mid-nineteenth century. At that time, the Imperial River was named Corkscrew Creek by the surveyors, but the name Surveyors Creek was soon adopted since the banks of the river became the encampment of the survey teams recording the topography of southern Florida. The settlement became known as Survey. Lee County, originally part of Monroe County, was established in 1887.

The first Americans to occupy the land along the Imperial River were Braxton Bragg Comer and his entourage, who arrived in the late 1880s. The Comers, wealthy plantation owners from Alabama, were partners in a 6,000 acre land purchase by a consortium of the Alabama plantation owners interested in Florida. They settled on the south banks of the Surveyors Creek near its junction with Oak Creek and began cultivating tropical fruits like pineapples and bananas. A severe freeze in 1893 and 1894 killed off many of B.B. Comer's stock plants. After losing substantial investments in the plantation, B.B. Comer decided to return to Alabama. This event, however, did not sour interest in the area. Several citrus farmers laid out groves along Surveyors Creek during the next few years. Others undertook the cultivation of tomatoes. J.R. Walker, J.J. Whidden, and Jonathan Coker settled east of present-day Imperial Street in 1895. Forrest Walker was the first child born in Survey, in 1897. The Survey Post Office was established in 1901, south of present-day Orange Blossom Street.

After B.B. Comer moved away, he sold his land holdings to a Ft. Myers real estate salesman named W.C. Battey. Battey set up a small grove on part of the land but was more interested in selling it to take advantage of the budding land boom. The 13th U.S. Census lists a total of 63 residents and 14 families living in the Township of Survey in 1910 (The Southwest Florida Pioneers Historical Society). In 1907, the Battey property was sold to Harvie Heitman, who sold part of it in 1912 to Ed Childers and J.H. Ragsdale, founder of the Bonita Land Company. They promoted the town of Bonita Springs, renamed for one of Ragsdale's daughters and for the warm natural spring found in the town. Surveyors Creek was renamed Imperial River. From that point, the agricultural industries in Bonita Springs began to be subsidized by tourism.

By 1920, the population had almost tripled. The 14th U.S. Census lists 177 residents living in 41 households. At that time, the majority of people listing a profession were employed in agriculture (Southwest Florida Pioneers Historical Society). According to a 1920 Bonita Springs Board of Trade booklet, the town featured four miles of paved roads, with a 4-1/2 mile long shell road to the beach planned. The Board of Trade also touted the three-room brick school that was to be completed by 1922. Bonita Springs School was completed in time for the 1921-1922 school year, replacing the original palmetto-thatched pavilion that served as the original schoolhouse.

The Fort Myers Southern Railway was formed in 1922 by the Atlantic Coast Line Railroad (ACL), Barron Collier, and other Fort Myers businessmen. Bonita Springs was added to its line in 1924. A "Y" where the trains could turn around was constructed near the present day intersection of Bonita Beach Road and Old 41 Road. After the line was extended through Naples to Marco Island by the ACL in 1927, the trains would travel in reverse south from Bonita Springs. In the 1920s, the Heitman Estate developed Bonita Springs west of Heitman Avenue, which later became Tamiami Trail. Unlike the Bonita Land Company, which named its streets after its members, the Heitman Estate named its streets after states. The Heitman Hotel was constructed as a temporary residence for new property owners overseeing the construction of their houses. This hotel has since been known as Hotel Bonita and Villa Bonita. It later became the Shangri-La, a health resort and spa, when it was purchased in 1964 by R.J. Cheatham. The spring for which the town is named is located on the grounds of the Shangri-La. This spring empties into Oak Creek, which runs through the Shangri-La property. Ed Agner became the first mayor in 1925, when Bonita Springs was incorporated for the first time. During the early years of the city, Florida was in the midst of a land boom. The Tamiami Trail, a road connecting Tampa to Miami via Fort Myers and Naples, was opened in 1928. The Tamiami Trail ran through the middle of Bonita Springs, along the route of present-day Old 41 Road, bringing with it a stream of tourists. The city was unincorporated in the 1930s, when Bonita Springs was unable to pay its $7000 electric bill. During the Great Depression, many residents left the agricultural community for larger cities. The income from the taxes on the remaining residents was not sufficient enough to pay for the street lights along Tamiami Trail. The city gave up its charter in exchange for Lee County paying the delinquent bills. Although the bust of the late 1920s and the Great Depression damaged the city's growth, the tin can tourists continued to frequent the local fish camps and hunting lodges. One such tourist camp was the Imperial River Court, which was established in 1926 and consisted of a two-story hotel, the Imperial River Court/Lilies Hotel, and camp sites. Sited on the south bank of the river, Imperial River Court was expanded in the 1940s to include the Imperial River Court Cottages. The Imperial River Court/Lilies Hotel and the Imperial River Court Cottages still stand on the south bank of the Imperial River, in present-day Riverside Park. Another tourist court, Baird's Camp (now demolished), was established in 1925. It was also located along the south bank of the Imperial River.

Two other tourist attractions contributed to the economy of Bonita Springs. Bill and Les Piper purchased land on the north bank of the Imperial River in 1937 and began an exhibition of Florida wildlife first called the Everglades Reptile Gardens and later called the Everglades Wonder Gardens. A few blocks further north on Old U.S. 41 Road was the Shell Factory, which was owned by Mr. and Mrs. Harold Crant. This Nova Scotian couple became enamored with the area while on vacation and moved to Bonita Springs in 1938. The factory, which eventually employed 50 local workers, became enormously popular with tourists, who purchased all kinds of trinkets made from shells. Crant owned the properties at all four corners of the intersection of Terry Street and present-day Old 41 Road. At the northeast corner of this intersection, Crant built a fruit juice and souvenir stand that resembled an orange. This building, later known as the Dome Tavern, was demolished for the widening of Terry Street. The Shell Factory's destruction by fire in 1952 and subsequent relocation to North Fort Myers was a great economic drain to Bonita Springs.