Photo: Home in the Riverside Historic District, Jacksonville, FL. The Historic District was listed on the National Register of Historic Places in 1985. Photographed by User:Ebyabe (own work), 2011, [cc-by-3.0 (creativecommons.org/licenses/by/3.0)], via Wikimedia Commons, accessed March, 2017. 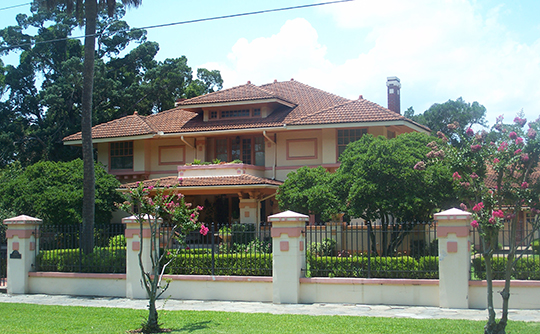 The Riverside Historic District [‡] was listed on the National Register of Historic Places in 1985.

The Riverside Historic District is a large, mainly residential neighborhood whose architecture spans a period from approximately 1871 to 1935. The Riverside District is located southwest of downtown Jacksonville on the west side of the St. Johns River. The District contains over 30 subdivisions and three major parks. At its widest, it is bounded on the north and east by Roosevelt Boulevard and Seaboard Coastline Railroad, on the south by the St. Johns River, and on the west by Seminole and McDuff avenues. The majority of the buildings in Riverside reflect middle and upper income taste in residential architecture during the late nineteenth and early twentieth centuries. The significant styles represented include Bungalow, Prairie School, Colonial Revival and Mediterranean.