Photo: Home in the Avondale Historic District, Jacksonville, FL. The Historic District was listed on the National Register of Historic Places in 1989. Photographed by User:Ebyabe (own work), 2011, [cc-by-3.0 (creativecommons.org/licenses/by/3.0)], via Wikimedia Commons, accessed March, 2017. 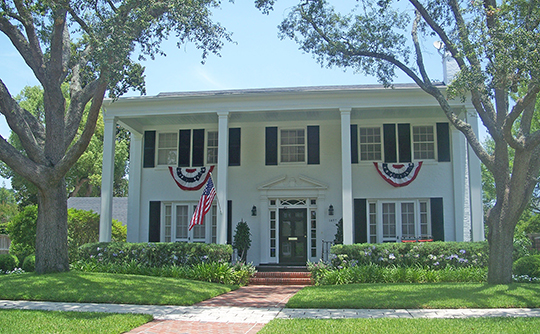 The Avondale Historic District [‡] was listed on the National Register of Historic Places in 1989.

The Avondale Historic District contains a high-quality concentration of residential design and construction dating from 1909 to 1936. It has remained primarily a single family residential neighborhood since its initial development.

The Avondale Historic District borders the St. Johns River, approximately three miles southwest of downtown Jacksonville. The district generally conforms to the boundaries of the Avondale Subdivision, a planned residential development recorded in 1921. The district boundaries are irregular and more or less rectangular in form. The district runs perpendicular to the St. Johns River, which forms its southern boundary. The remaining rough boundaries are the Avondale subdivision line on the west; Roosevelt Boulevard, a major traffic artery, on the north; and the Riverside Historic District, a slightly earlier residential neighborhood, on the east.

The plan of Avondale is the most distinctive part of the district and clearly distinguishes it from its surroundings. It consists of 35 blocks that extend north from the St. Johns River. The blocks and lots are frequently curvilinear and highly irregular in form, in contrast with the rectangular blocks and lots of nearby subdivisions, such as Riverside.

Landscape and streetscape design and green spaces contribute to the distinctive sense of place which the district conveys. These features include curvilinear streets, landscaped medians, and fifteen small, pocket parks. The parks and esplanades are concentrated along the major north-south streets of the district, specifically Avondale, Belvedere, and Edgewood Avenues. Natural features, mainly the river and an abundance of large trees that offer spacious canopies, distinguish the district. Trees and plants include live oaks, magnolias, palms, azaleas, and dogwoods. The parks, landscape features, and plantings visually link the modest with the more substantial residences in the district.