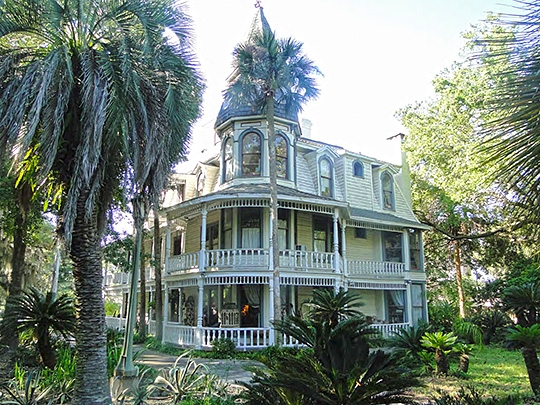 Marabanong (4747 River Point Road, Jacksonville, FL) was listed on the National Register of Historic Places in 2013. Portions of the content of this web page were adapted from a copy of the original nomination document. [‡]

Marabanong is significant at a local level for its Architecture. The building has served as a residence throughout its history. During the late 1800s and into the early 1900s, the house served as a retreat for medical patients. In the early 1910s, the house and surrounding grounds were used to shoot several films by the Jacksonville film industry, including a movie shot by the Karem Company starring Ethel Barrymore. With its large full height tower, a two-story wraparound veranda, alternating shingle patterns, and detailed spindlework along the balustrades, Marabanong is an excellent early example of the Queen Anne style found in Jacksonville.

After regaining Florida from the British in 1783, the Spanish constructed a fort at San Nicholas on the south side of the St. Johns River to protect the strategic river crossing at the King's Road, as well as to provide defense for St. Augustine. Although the fort was abandoned by the Spanish in 1817, much of the area around the fort, all the way to the Arlington River, became known as St. Nicholas. The St. Nicholas area, which was sparsely populated, was divided between two Spanish land grants, one to Francis Bagley and the other to Reuben Hogans. Reuben Hogans' land extended from just east of Miller's Creek to the Arlington River (Pottsburg Creek), and included a high ridge along the St. Johns River called Hazzard's Bluff. Hazzard's Bluff, which includes Keystone Bluff and Empire Point, was later purchased by Francis Richard, who owned a substantial land grant to the south of the Arlington River. Hazzard's Bluff was later sold to planter John Sammis, who in turn sold the property. Three sawmills were later developed on this property. One of the mills was the Empire Mill, constructed by the Barton Hayworth Ironworks Company of Baltimore in 1850 for Samuel Halliday. This mill, which was located at Empire Point at the mouth of the Arlington River, was the first circular sawmill constructed in Florida.

In 1870, Thomas Basnett (1808-1886) purchased a large piece of property along Hazzard's Bluff from Jacksonville banker D.G. Ambler. Called Perley Place, the property included a house constructed in 1858 by a previous owner, Thomas F. Perley. After a fire destroyed the Perley house sometime in the 1870s, Basnett had the present house constructed ca. 1876. Basnett, who was a noted astronomer from England, called the new house and estate Marabanong, a New Zealand Maori word for "Paradise." He likely conceived of the design concept of the house after attending the Philadelphia Centennial Exposition of 1876, which heavily promoted the Queen Anne style. The estate also included a brick wine cellar built into the river bluff in front of the house that connected to the kitchen via an underground passageway. According to oral sources, this cellar was constructed before the Civil War and was part of the Perley estate.

In the early 1880s, Basnett married Eliza Madelina Wilbur, an internationally known astronomer from New York. Like her husband, Eliza Basnett had also published numerous scientific articles and books, including her own scientific magazine entitled Continuity. Mrs. Basnett is credited with being the first woman to ever lecture students at Harvard University on science. While at Marabanong, Eliza Basnett patented many inventions, including a large astronomical telescope and was even designing an airplane at the same time as the Wright Brothers' historic flight. Later in her life, she achieved a measure of notoriety as an author and poet, with one of her best known works being The Ulyssiad, which was an epic poem on the life of Ulysses S. Grant published in 1896.

Following the death of Thomas Basnett, in 1886 Eliza married Dr. E. Matthieu Souvielle, a French physician. Dr. Souvielle was a noted throat and lung specialist. Because of his medical specialty, he and Eliza converted Marabanong into a sanitarium. It was promoted in a 1903 newspaper as an "international resort for tourists who require special attention." The Souvielles were both actively involved in the American Association for the Advancement of Science. Matthieu Souvielle was also an amateur geologist and discovered valuable phosphate mines in Florida. While living in Jacksonville, Dr. Souvielle became the vice president of a large syndicate of aluminum mining and manufacturing that was based in the city.

With the death of Dr. Souvielle in 1914, Eliza sold Marabanong to her cousin, Grace Wilbur Trout. Born in Maquoketa, Iowa, Grace Wilbur married George W. Trout, also a native of Maquoketa, in 1886, and in 1892, they moved to Chicago, eventually settling in Oak Park, Illinois. George Trout had a wholesale hardware company in Chicago. While in Illinois, Mrs. Trout became nationally prominent in the Women's Suffrage Movement. Her role as an organizer, lecturer, writer, and tireless campaigner for women's rights played a pivotal role in achieving statewide suffrage for women in Illinois in 1913. She was personally present to witness Governor Edward Dunne sign the Suffrage Bill into law. Widely seen as a major victory for the movement, Illinois became the first state east of the Mississippi to extend suffrage to women. Grace Trout was at Marabanong for only a short time before she was called back to Illinois in 1915 to help defeat efforts to repeal the Illinois legislation. She went on to be actively involved in the national campaign that resulted in the passage of the 19th Amendment to the U.S. Constitution in 1919. In 1921, Grace returned to Florida and became involved in many local organizations and activities. She was active in the Jacksonville Chapter of the Daughters of the American Revolution, the Jacksonville Woman's Club, the Friday Musicale, the Fine Arts Society, the Little Theatre, and City Planning Advisory Board, and served for two years as the president of the Garden Club of Jacksonville. George Trout continued in the hardware and government surplus business.

The Trouts also began making improvements to the ground around Marabanong, which by now had expanded to 54 acres. In 1922, they added a large swimming pool surrounded with decorative benches and Venetian lanterns. Other outdoor features included another swimming pool with artificial rain; fish ponds; waterfalls made with Canary Island ballast rock; a recreated "Gypsy camp" for picnics; and a "Camphor court," a grove of camphor trees to create a bug-free picnic area. A ballroom was located above a five-car garage that has since been demolished. The Trouts also had a zoo at Marabanong that included deer, South American crocodiles, pheasants, and peacocks. According to oral sources, the exotic grounds at Marabanong were used as movie sets by the Karem Company located in East Jacksonville, which included the production of a movie starring Ethel Barrymore. George Trout died in 1949 and his wife Grace died in 1955. Both are buried in Evergreen Cemetery in Jacksonville.

Marabanong continued in the Trout family until 1983. At that time, much of the estate was reduced to less than two acres, but still contained the house, the 1922 swimming pool, the 1840s wine cellar, and many of the early landscape features. In 1992, a parcel on the north side of the house, which contains the wine cellar and adjacent stairway, was sold separately and has been under different ownership than the house since then. New houses have been constructed between the wine cellar and main residence, visually dividing the property. The Ripley family, the current owners, acquired the house property that same year.

As it developed in the United States, the Queen Anne style was almost exclusively domestic and was usually executed in wood frame. The style was popular in Florida from approximately 1876 to 1910. Richard Norman Shaw (1831-1912), a successful designer of country homes, led a group of nineteenth century architects who named and popularized the style. Its name was inappropriate, for the precedents they used has little to do with the formal Renaissance architectural forms dominant during the reign of England's Queen Anne (1707-1714).

A fully developed Queen Anne house is usually a two-story building, distinguished by asymmetrical massing and an elaborate use of shapes and textures designed to produce a highly picturesque effect. Vertical elements are separated by horizontal bands using various siding materials, such as towers, pavilions, dormers, balconies, and wraparound porches often further enriching the building.

With its three stories plus basement and attic, large full height tower, two-story wraparound veranda, alternating shingle patterns, and detailed spindle-work along the balustrades, Marabanong is an excellent and unusual early example of the Queen Anne style found in Jacksonville. Despite some alterations, such as the removal of the one-story porte cochere and the expansion of the kitchen on the first floor of the interior, this building still retains a high degree of integrity. The setting around the house has changed since the period of significance. What was once a large undeveloped parcel encompassing most of a peninsula is now an entire subdivision. The wine cellar has since fallen under separate ownership and is now visually cut off from the rest of the Marabanong property by a line of houses built for the subdivision. Despite these changes, Marabanong retains much of its immediate setting. Many of its historic landscape features, including a pool, fountain, wishing well, artificial pond, footbridge, and walkways, remain.