Photo: Soldiers and Sailors Monument in Wilmington, Delaware at approx 1300 Delaware Avenue, in the Delaware Avenue Historic District. The Historic District was listed on the National Register of Historic Places in 1976. Photographed by User:Smallbones (own work), 2010, [cc-by-1.0 (creativecommons.org/publicdomain/zero/1.0/deed.en)], via Wikimedia Commons, accessed June, 2015. 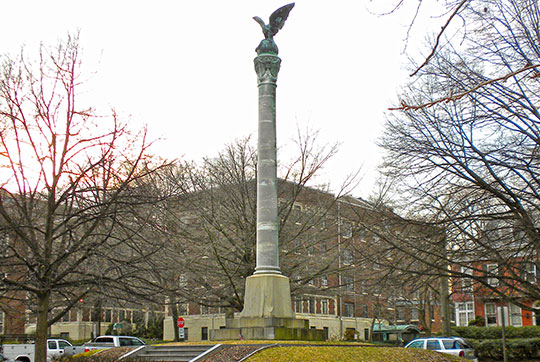 The Delaware Avenue Historic District was listed on the National Register of Historic Places in 1974. Portions of the content of this web page were adapted from a copy of the original nomination document. [‡]

The Delaware Avenue Historic District, an excellent example of America's "Gilded Age," contains outstanding examples of Victorian architecture. The district is also significant as an example of early suburban development in America.

A variety of materials are used, often in combination, in the construction and decoration of the houses, including brick, granite, marble, terra cotta, brownstone, ashlar-scored stucco, wood, cast iron, and slate. Many of the houses have one or more stained-glass windows. All of these architectural features and materials were used lavishly in the design of the major houses along Delaware Avenue, and most of the buildings still retain a nineteenth-century grandeur in their exteriors.

Fewer of the elaborate interiors, popular during the period, have survived intact. Most notable in this respect is 1308, now occupied by the Delaware Lung Association. One of its ground-floor rooms has a ceiling richly embellished with Gothic tracery, while an adjoining sitting room is decorated in the style of Louis XV. 1304 has a particularly fine fireplace in the room now serving as one of the A.A.U.W. offices and a smaller tiled fireplace is in the hall.

In the area formed by Delaware Avenue, West Fourteenth Street and North Broom Street is the Soldier and Sailors Monument. It originated with the idea of Alfred S. Nones, one-time officer with the Delaware Veteran Volunteer Infantry, to convert the columns in front of the Old Pennsylvania Bank Building, demolished in 1868, into monuments to the Civil War dead. The bill passed in Congress and plans were drawn up by A. B. Mullet, Supervising Architect in Washington, D. C. The monument was privately funded. In 1880 Washington Jones, the president of the Soldiers Monument Association, took charge of the shaft.

The Delaware Avenue Historic District is outstanding as an example of effective city planning. It comprises the only extant portions of the original 1870's real estate development along the trolley car line established by Joshua T. Heald in 1864 to encourage settlement in this part of Wilmington. In partnership with James L. Devou, Heald improved and laid out lots along the line. The lower portion of Delaware Avenue, including the 900, 1000, and 1100 blocks, is gone, but the remaining 1200 and 1300 blocks centered around the historic Soldiers and Sailors Monument, retain much of the grandeur of their heyday. Strictly speculative, the real estate development proved a profitable investment. In less than ten years, this area was the most fashionable in the city and contained homes built in the most modern architectural styles. Many of the city's industrial and civic leaders built homes along the avenue. These men set the standard for elegance in Wilmington.

The 900, 1000, and 1100 blocks were developed first. Unfortunately, the buildings in these blocks are gone. The first houses in the 1200 block were built by James Bradford in 1871. The unique facade of 1200-1202 was painted because it had been built using second-hand bricks saved from the demolition of the old Indian Queen Hotel at Fifth and Market Streets, which was razed to make way for the Clayton House. This semidetached house was demolished.

1200-1203 and 1205-1207 were built in 1873 as an investment by Clement B. Smyth, treasurer of the Diamond State Iron Company and the Vulcanized Fibre Company. William Spruance, one of the foremost lawyers in Delaware and later Senior Associate Justice of Delaware, built the next house to the west, 1211, around 1870. Across the street in the same block, 1204-1206 was built by S. D. Carswell, a mill owner, who occupied 1206 and sold 1204 to F. L, Gilpin, president of the F. L. Gilpin Insurance Company. 1208-1210 was built in 1875 by Robert Scott, who lived there for three years and then sold it to Thomas Bellah, president of the Bellah Iron and Steel Company. Among the builders of homes in the 1300 block were James L. Devou, Heald's Delaware Avenue development partner, James C. Johnson, owner of a house-finishing company, and Heald himself. Devou built 1311 in 1871. Heald also built 1315. Johnson built 1313 at the same time.

Had the development of Delaware Avenue remained centered around that one main street, it is doubtful that even the 1200 and 1300 blocks of the larger development would have remained. However, streets adjacent to Delaware Avenue were laid out and later developed along the same architectural lines as the Delaware Avenue homes. These subsidiary streets are not being included in the historic district at this time because of their later date.

Delaware Avenue was originally developed to provide a residential section for the growing Wilmington. Now a century later, people are returning to the area from the suburbs again to be closer to the center of Wilmington. The large apartment complexes in the area supply the additional needed housing. Thus, Delaware Avenue remains an important adjunct to the city.