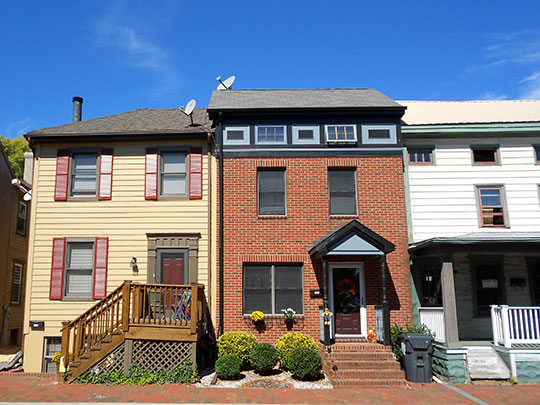 The North Milford Historic District [‡] was listed on the National Register of Historic Places in 1983 as part of the Milford Multiple Resource Area.

The North Milford Historic District lies on the north side of the Mispillion River, on land that slowly rises as it moves north away from the river. The western edge lies near Silver Lake and its eastern boundary is North Walnut Street; it extends as far north as N.W. Third Street. This area includes the original town, as well as the less-altered buildings from the later building periods. The district does not contain any significant intrusions. Also, the historic fabric of the buildings has not been affected by the introduction of contemporary building materials. The Delaware Bay is about 15 miles east as the Mispillion River flows. The surrounding land is used for agricultural purposes.

N.W. Front Street serves as the center of the district from its western end at Mill Street, which marks the limit of the surviving early nineteenth-century structures in North Milford, to North Walnut Street. This includes a part of the business district that remains in its original condition and which has not been changed by the introduction of modern buildings. Also included are a number of Greek Revival structures located near the intersection of N.W. Second Street and North Walnut Street, the northeast corner of the historic district. The northern limit of the historic district is N.W. Third Street, in order to include examples of early nineteenth-century Gothic Revival and vernacular architectural styles.

West Street and Truitt Avenue form the western boundary of the historic district in order to include Christ Church and cemetery, listed on the National Register in 1973, as well as a number of mid-to-late, nineteenth-century vernacular buildings. Those structures beyond the district have either been built within recent times, or have been so altered from their original appearance and form so as not to contribute to the historic resources of the district.