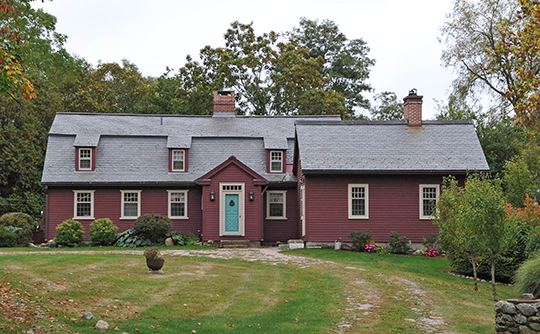 Groton was named for the English home of Governor John Winthrop.

Groton was once part of the New London plantation, founded by John Winthrop, Jr., in 1646, which encompassed land on both sides of the Thames River estuary at Long Island Sound. Settlement at Groton on the west side of this natural harbor began by 1700. Set off as a separate parish in 1702, Groton became a new town in 1705. As did many communities with a dispersed farming population, Groton tried to create an institutional focus in its geographic center. Although a meeting house and school were built in Center Groton in 1703, it never became the thriving village envisioned by the proprietors. Instead, villages to the west and east grew in importance because of their riverine locations, especially Groton Bank on the Thames River, the western border of town. On the east, Old Mystic thrived as a river port on both sides of the Mystic River until the center of maritime activity shifted to Lower Mystic on the coast, the seaport village today known as Mystic.