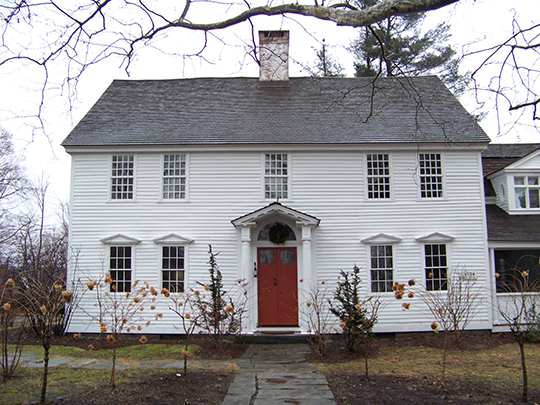 The Oliver Wolcott House (a National Historic Landmark located at 89 South Street) was listed on the National Register of Historic Places in 1971. Portions of the content on this web page were adapted from a copy of the original nomination document. [‡]

The Oliver Wolcott House, built by Oliver Wolcott, Sr. in 1753, is a two-story rectangular frame structure with a gable roof, large central chimney, and slight overhangs at the gable ends. The main house is about 38 feet wide and 30 feet deep, or five-bays by two-bays in size. A small one and one-half story frame wing with gambrel roof, built on the main axis, adjoins the south end of the main house. Added around 1783, a one-story porch with coved or "barrow" roof extends across the west (front) facade of the wing; the wing contains one room on each floor. The walls of the main house and wing are covered with clapboard and the windows are adorned with exterior louvered shutters. First-story windows on the main house are topped with triangular pediments. The center door is sheltered by a Federal Period (1780-1800) broken pediment type portico supported by two fluted columns and the door itself is topped by a round arch fanlight.

The front and end elevations of the main house have undergone few alterations. A small bay window has been inserted on either side of the chimney in the south end wall of the south wing and a wide dormer added in the west (front) upper story of this wing. In the 1880's the main house was enlarged by the addition of a large two-story frame service wing to the northeast (rear) corner of the main house, thus giving the structure its present L-shape. The east wing contains the present kitchen and work rooms and bedrooms for the servants. This rear wing is built in such a way that it is not visible from the street.

The main house has a typical central chimney floor plan: the rooms are arranged in two tiers. A short central hall extends back to the center chimney and contains the original stairway. To the left (north) of the hall is the dining room and to the right, a parlor. The fireplace walls of both rooms are fully paneled and the floors are of wide boards. Back of the parlor an open hall leads on the right to the morning room or bedroom in the south wing, and on the left, to the original kitchen which contains a very large fireplace. Upstairs there are four bedrooms in the main house and one in the south wing. Two bedrooms in the main house have paneled overmantels. The interior is largely original.

The Oliver Wolcott House was the home of Oliver Wolcott, a Signer of the Declaration of Independence for Connecticut, politician, soldier, jurist, and Governor of Connecticut from 1753 until his death in 1797. The original house has been considerably enlarged by additions made to the rear but is otherwise little-altered.

Oliver Wolcott was born in Windsor (now South Windsor), Connecticut, on November 20, 1726, a son of Roger Wolcott, the 13th Governor of Connecticut. He graduated from Yale College in 1747 and studied medicine fox a while, but in 1751 moved to Litchfield, Connecticut, where his father owned property, and became its first sheriff, an office he had for 20 years. In 1775 he married Laura Collins of Guilford, by whom he had five children.

Oliver Wolcott was elected deputy for Litchfield in 1764, 1767, 1768, and 1770. He was a member of the Connecticut upper house from 1771 to 1786; he was judge of the court of probate for Litchfield from 1772 to 1781 and judge of the county courts in and for Litchfield from 1774 to 1778. He was a delegate to the Continental Congress from October 1775 to 1783, except for the year 1779. He participated in the early debates over the Declaration of Independence but left Philadelphia because of illness at the end of June, and his substitute William Williams signed in his stead. After Oliver Wolcott returned, October 1, 1776, he was permitted to sign also. Wolcott attended the Continental Congress from three to six months every winter or spring. During the summer his time was usually occupied with active military service in the militia.

Oliver Wolcott became a major in the Connecticut militia in 1771 and a colonel in 1774. In August 1776 he commanded as brigadier-general the 14 militia regiments sent to New York to reinforce General Israel Putnam on the Hudson River. In December he was put in command of the 6th Militia brigade in northwestern Connecticut. On September 25, 1777, on his own responsibility, he led a force of 309 mounted volunteers from his brigade to reinforce General Horatio Gates' army on the Hudson in northern New York against Burgoyne. Arriving at Bemis Heights on October 4, Wolcott took command of a 1,199-man Connecticut militia brigade comprised of his volunteers and Colonels Thaddeus Cook's and Jonathan Latimore's regiments. He was present at the Second Battle of Freeman's Farm, October 7, and at the surrender of Burgoyne's army at Saratoga (Schuylerville, New York) on October 17, 1777. As a major general of militia in 1779, Wolcott had the task of defending the Connecticut seacoast against Tryon's raids.

After the treaty of peace was signed, Wolcott resigned from Congress, although in 1784-85 he did serve as one of their commissioners to negotiate a treaty of peace with the Six Nations at Fort Stanwix, New York. In 1787 he was chosen lieutenant-governor by the legislature and on Samuel Huntington's death in January 1796, Wolcott succeeded to the governorship. In May of that year he was elected Governor in his own right and held that office until his death on December 1, 1797. He was buried in the East Cemetery near Litchfield.

Some Historic Sites of Litchfield, Connecticut (Published by the Litchfield Historical Society, 1933), 10.