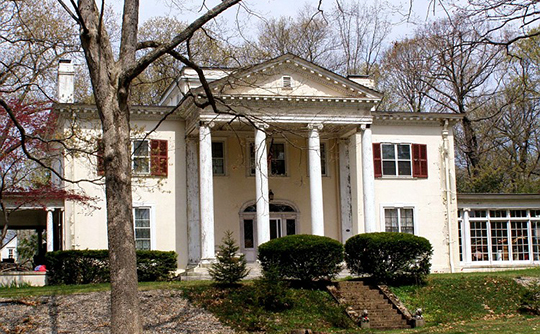 The Ernest R. Burwell House (161 Grove Street) [‡] was listed on the National Register of Historic Places in 1992.

The Ernest R. Burwell House, built in 1918, is a large Neoclassical-style residence located on Federal Hill, a residential neighborhood, in the geographic center of Bristol, Connecticut. The Burwell House is located at the northeast corner of the Oakland and Grove Street intersection. The property is situated one block east of the Federal Hill Historic District's Walnut Street boundary.

Grove Street was once the site of four major Bristol residences. In addition to the Burwell House, only two remain: the Townsend Treadway House (1915, architects: Murphy and Dana, New York) and the Edward Ingraham House (1928, architect: Richard Dana, New York). The DeWitt Page House (1918, architect: Walter Crabtree, New Britain[1]), once located on the adjacent property east of the Burwell House, was demolished in the 1970s.

The Ernest R. Burwell House is on a knoll on the upper slopes of Federal Hill set back from Grove Street and high above Oakland Street. A semi-circular driveway in front of the house echoes the formality of the facade and is a major feature of the landscaping plan. A tier of concrete steps leads to a tier of marble steps abutting the portico. Characteristic of this style, the facade is symmetrical and features a smooth stucco finish over masonry and a flat asphalt roof. A colossal tetrastyle portico graces the Grove Street elevation and provides a focal point for the symmetrical facade.

The Grove Street facade is three bays wide and features a pedimented portico with Scamozzi columns. The front entrance consists of a paneled door surmounted by a fanlight and flanked by two sidelights, each enhanced by leaded glass. A modillion cornice enriches the upper stories and dentil molding creates a band below the cornice. The roofline was originally surmounted by a balustrade, now missing. The balustrade of the house was identical to that of the existing garage.

Four-over-four double-hung windows are used throughout the house, although the ground-floor facade has eight-over-twelve sash. These windows have marble sills, and all windows have louvered shutters. The facade is flanked by two single-story porches: the Oakland Street porch is open, and the east porch is an enclosed solarium, with 3x5 full-length windows. Both porches have flat roofs, terra cotta floors with marble edging, and paired Ionic columns at the corners.

A second-floor solarium, enclosed by a later owner, projects from the center of the rear elevation. A low-profile third story housing the original servants' quarters is visible only from the rear of the house.

A detached one-story two-bay garage, contemporary with the house in period and style, is situated northeast of the house. Its roof is surmounted by a balustrade. The garage is considered a contributing building for the purpose of this nomination.

The residence combines a formality of style and dignity on the exterior with a light and open interior. The large entrance foyer is embellished by a parquet floor, eight pilasters, dentil molding, a vaulted ceiling, and paneled wainscoting. A monumental curved staircase ascends from the foyer. The foyer also provides access to the living and dining rooms through raised-panel double-leaf doors. At the rear of the foyer is the entrance to the library. This room is paneled in mahogany and contains a desk alcove and three built-in mahogany bookcases.

The living room has a fireplace with a marble mantel shelf supported by consoles. Centered beneath the shelf is a raised-relief elliptical motif enriched by garlands. Fluted pilasters flank the entire ensemble. Paneled wainscoting surrounds the room. Double French doors are symmetrically placed on either side of the fireplace, each with a transom. The doors lead to a large open porch.

The dining room has crown and picture molding and a fireplace flanked by fluted colonettes and raised plaster ornaments in the form of garlands below the mantel shelf. The mantel is embellished with dentil molding with a repeating acorn motif. The room is paneled to a height of seven feet. Two china cupboards with leaded and beveled glass are located in the corners of the room. French doors lead to a ground-floor solarium.

The second-floor solarium is located off the first landing of the main stair. French doors flanked by leaded-glass sidelights give access to the room. On the second floor large archways lead to the master bedroom and secondary bedrooms, located off a simple hallway along the east-west axis of the house. A servants' stairwell is accessed from the foyer and rises to the third floor, with a liner closet at the second level. The third floor contains two small bedrooms and a bath. The house was originally equipped with a central vacuum system.

The Ernest R. Burwell House is an outstanding example of Neoclassical domestic architecture in Bristol, Connecticut, as well as the largest Neoclassical residence in town. Designed by Walter P. Crabtree, a leading Hartford County architect, it is one of his larger and more ambitious residential commissions. An expression of the large, formal residence favored by the industrial elite of the early twentieth century, it features graceful proportions, large public rooms, and exquisite custom-designed interior detailing typical of the period's high architectural quality. The Burwell House is well preserved and has been little altered except for the removal of the roof balustrade.

Built on Federal Hill, Bristol's most fashionable neighborhood in the early twentieth century, the Ernest R. Burwell House is architecturally significant as an outstanding example of Neoclassical domestic architecture. The stucco finish makes it unusual. Its symmetry, graceful proportions, and formal landscaping are particularly noteworthy. The restrained but finely crafted exterior moldings contrast effectively with the smooth texture of the stucco. The interior appointments are as elegant as the exterior; the large rooms are richly detailed with classically inspired custom moldings and expensive wood paneling in a variety of designs. The use of two large open porches as well as two enclosed porches, one for each elevation, emphasizes the importance of the integration of the natural world into the house's design.

Walter Percival Crabtree (1873-1962), a locally prominent practical architect from New Britain and Hartford, designed the Ernest R. Burwell House in 1918. Crabtree was born in Rochester, New York. During 1901-1904 he was employed in the architectural office of William C. Cadwell of New Britain [2]. Thereafter he opened his own office in New Britain at 272 Main Street (1905-1933), and later practiced with his son, Walter P. Crabtree, Jr., during 1927-1929 [3,4]. He opened his own Hartford office in 1930, continuing in practice for half a century, to 1951. He was a member of the Connecticut Chapter of the American Institute of Architects during 1931-1935.

Crabtree had other commissions in Bristol in addition to the Ernest R. Burwell House and the DeWitt Page Mansion, both located on adjacent parcels on Grove Street. In 1908 Crabtree designed the Beaux Arts-style Bristol Trust Company (now the Bristol Savings Bank, 150 Main Street).

Ernest Romaine Burwell (1857-1945), the original resident of the house, was born in New Hartford, Connecticut. He was the son of John S. Burwell, a descendant of John Burwell, who came to New England from Sutton, England, in 1639 [6], and Clarissa Lewis Burwell, of Bristol, Connecticut. He studied under private tutors, one of whom was a Yale professor. He worked in New Haven for six years for the Adams Express Company, then relocated to Bristol.

An entrepreneur, Burwell began a retail coal, ice, and trucking business in 1893 and later formed a partnership with Clifford S. Barnes of Bristol, as Burwell & Barnes. He married Sally Gregory of North Orange, Massachusetts, in 1899. He took charge of the savings investment department of the General Motors Corporation at the New Departure Plant in Bristol in 1918. The same year he built his house on Federal Hill. Two years later, he was elected president and treasurer of the Bristol Manufacturing Company, a textile mill which knitted woolen garments; it ceased operation in 1923 when the demand for knitted underwear declined [7]. At various times Burwell was a director of the New Departure Manufacturing Company [8] and the Bristol Bank & Trust Company. He was a member of the Free and Accepted Masons.

The Burwell House was subsequently occupied by Lester G. Sigourney (1929-1934), Edward W. Mink, M.D. (1935-1950), Philip S. Brezina (1951-1953), and a state senator, Wallace Barnes (1954-1961). It was then purchased along with the adjacent Page Mansion by a junior college, DeWitt Hall [9]. The school re-named the Burwell House "Grove House," and it featured an assembly room and student lounge on the first floor, and a faculty lounge and offices for the President, the Director of Admissions, and the Dean of Students on the second floor. Although DeWitt Hall won a Connecticut Supreme Court case after the State Education Department, in 1962, challenged its right to operate, it was unable to reopen. The Burwell House remained vacant until 1971 when purchased by Frank De Batiste. De Batiste sold the house in 1987 to the present resident, Thomas Read.