Photo: Homes in the Lakeview Village Historic District, Bridgeport, CT. The historic district was listed on the National Register of Historic Places in 1990. Photographed by User:Magicpiano (own work), 2013, [cc-by-4.0 (creativecommons.org/licenses/by-sa/4.0/deed.en)], via Wikimedia Commons, accessed January, 2018. 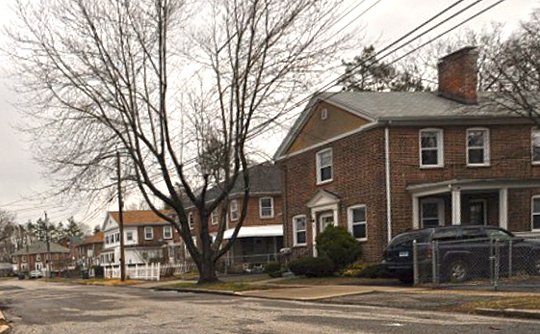 The Lakeview Village Historic District [‡] was listed on the National Register of Historic Places in 1990.

The Lakeview Village Historic District, sited on an irregularly shaped parcel, is bounded by Essex Street to the north; Boston Avenue to the west; Colony Street to the southwest; Plymouth Street to the southeast, and Asylum Street to the northwest. Located in the middle/eastern section of Bridgeport, in close proximity to what in 1918 was the Remington Arms Factory in which Russian rifles were produced and which is now an active General Electric manufacturing facility, Lakeview Village is set in a mixed-use residential/commercial/manufacturing area of the city. Its western boundary, Boston Avenue, is divided by a wide grassy median and is developed with both residential and commercial buildings. Its other boundaries all abut residential neighborhoods, and their irregular pattern makes this district the least physically cohesive of the housing complexes.

Lakeview Village Historic District consists of 93 brick, single-family, duplex, and rowhouse type dwellings flanking 12 mature tree-lined streets. With the exception of three buildings, each structure occupies its own building lot and has front, rear, and side yards or gardens. The entire complex is unified by a pre-determined master site plan and by a common Colonial Revival design vocabulary that recurs at each structure for such details as doors, porches, windows, and roof forms. Generally two stories high, the houses in Lakeview Village have either gable, hipped, or, in a few cases, gambrel roofs of which the orientation to the street varies. The original surface material of all of these buildings is red brick laid in an English bond pattern. Windows characteristically carry 6/6 sash, but occur in flat-arched and segmental-arched configurations. Angled, multi-pane oriel windows also are found at the ground floor of various building types. The closed-bed-pedimented, gable-roofed entry hood or portico is ubiquitous, although recessed entries occur. All houses rest on masonry foundations.

Lakeview Village, known as the Mill Green Development when built, is significant due to its direct association with the U.S. Housing Corporation's efforts to provide emergency housing efforts for workers manning the factories of the city's war-related industries. It is a good example of the first government-subsidized housing built in Bridgeport. It survives with surprising architectural integrity and is a local legacy reflecting the high design quality and first national housing standards achieved through the earliest government-owned housing program in the U.S. It is an excellent example of the work of the collaborative efforts of R. Clipston Sturgis, Andrew Hepburn, and planner Arthur Shurtleff, who created a well-conceived and executed model housing unit that maintains a distinct urban character incorporating middle-class housing tastes with English Garden City and American Garden suburb tenets. As built, the complex presents a strong visual presence and prominence derived from a cohesive site plan, shared materials, and similar scale, proportion, and design quality that set it apart from its immediate urban context. It is also significant for its association with Bridgeport's most intense period of growth as housing for workers involved in defense work at the nearby Remington Arms Company's "Russian Rifle" factory.