Photo: Row homes in the Gateway Village Historic District, Bridgeport, CT. The historic district was listed on the National Register of Historic Places in 1990. Photographed by User:Magicpiano (own work), 2013, [cc-by-4.0 (creativecommons.org/licenses/by-sa/4.0/deed.en)], via Wikimedia Commons, accessed August, 2016. 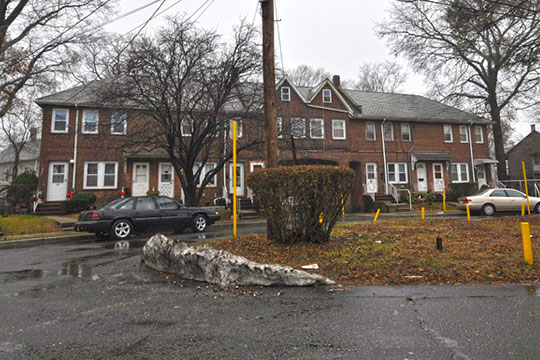 The Gateway Village Historic District was listed on the National Register of Historic Places in 1990. Portions of the content on this web page were adapted from a copy of the original nomination document. [‡] Adaptation copright © 2010, The Gombach Group.

Gateway Village is one of the first housing projects built by the locally organized and financed Bridgeport Housing Company. Located near the eastern boundary of the city and bounded on the east by Waterman Street, on the north by Connecticut Avenue, and on the west and south by the rear yards of the buildings on Alanson Road, Gateway Village Historic District is a tight residential complex in a mixed-use residential/commercial area of Bridgeport.

This picturesque Tudor Revival complex consists of blocks of varying sizes containing 87 one-family and two-family rowhouses facing three mature tree-lined streets. Five of the buildings enclose a spacious interior courtyard/garden entered via arched passageways included as part of the design of two of the blocks, while four buildings face and define a "general court" along Alanson Road. All of the buildings are two-and-one-half stories high, are of brick construction with brick sills and pointed-arched lintels, and terminate with slate shed roofs with numerous cross gables. The main facades are punctuated by either paired gable arches articulated with long narrow windows and shingle gabled arches containing a single Tudor-arched window. The first and second stories are surfaced with six-course American bond brick with flush soldier heads. The paired gable ends are surfaced with American bond brick with evenly spaced projecting headers. Low three-step stoops lead to multi-paned wooden doors which provide access to each individual unit; some entries are topped by bracketed shed-roofed hoods, come by pointed-arched hoods and others are plain. All windows have double-hung 6/1 sash with simple surrounds and occur singly, in pair, and triple configurations. At the rear of each block, double-height wood gallery porches serve each dwelling unit. The two storefronts at one of the Alanson Road blocks have been sympathetically bricked in and converted to residential use.

Gateway Village survives with a high degree of integrity.

Gateway Village Historic District, known as the Connecticut Development when built, is significant as one of the first developments of the locally organized and capitalized Bridgeport Housing Company, providing housing for war workers in such nearby factories as the Bridgeport Projectile Company. It is a successful example of a consciously conceived, planned, and executed model housing possessing a distinct urban character and incorporating middle-class housing sensibilities as an inducement to keep the workers in Bridgeport. It is important too as an early example of housing development that embodies both English Garden City precepts and American Garden Suburb tenets. Its sense of place, derived from its internally oriented site plan, cohesiveness of site plan, materials, scale, proportion, and design sets it apart from its immediate urban context. It is one of few surviving examples of the work of the architectural firm of Mead & Schenck, the earliest known partnership of women architects in New York City. It is, of course, also significant for its association with Bridgeport's most intense period of prosperity and growth during World War I, as housing for workers engaged in defense-related industry.