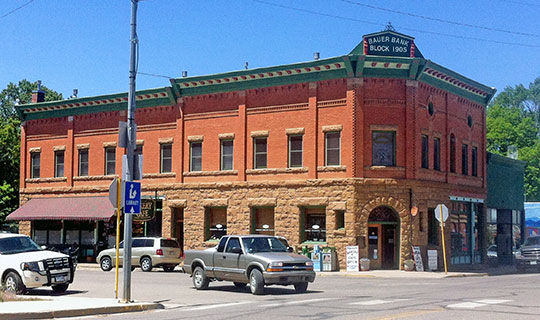 Although the region was sporadically settled, the Mancos area had no semblance of a community in 1880, when George Bauer set up a small shop next to a mill and a log school building that served the region. Bauer's store was just one of many successful ventures that would propel this entrepreneur to magnate status in southwest Colorado.

Born in 1848 in Westphalia, Prussia, Bauer immigrated with his family to the United States at the age of 17. He learned the mason trade in Illinois and set out to make his fortune. In partnership with the father and son team of Carl and John Schultz, he built many stone and brick structures in Del Norte and other towns in western Colorado, including the Finley Block in Lake City, Silverton's granite Sherwin and Houghton Building (now housing the Pickle Barrel) and the Posey and Wingate building at the corner of 13 and Greene Streets (1880) in Silverton. Bauer married John's sister Augusta in 1876, and they raised a son and daughter.

Apparently a man of great energy, Bauer set up a small mercantile business in Big Bend (a community that was abandoned for the new town of Dolores). He turned his attention to the settlers in the Mancos Valley and, according to local legend, arrived one day in 1880 with three burros loaded with goods. His first store near the schoolhouse flourished and he became the postmaster at the post office located in his mercantile establishment. Bauer bought a large tract of land and built a handsome sandstone and brick home. As Mancos began to develop, he built a more substantial mercantile building and opened the Bauer Bank in 1886.

The ultimate location and direction for the growth of Mancos did not become clear until the Denver and Rio Grande Railroad arrived in Mancos in 1891. The Railroad's first depot was an embarrassing "cow barn" located to the north and west of the main area of settlement. The railroad laid out a townsite located west of the fledgling commercial district, and tried to develop a town there with the offer to build a respectable depot. But a faction headed by community business leaders D. H. Lemmon and George Bauer wanted Mancos built in its present location and invested heavily to make it happen. Lemmon's interests were concentrated close to the bridge that connected the commercial area on the north and south sides of the Mancos River. George Bauer owned much of the land in the commercial area just north of Lemmon's holdings. Bauer offered free lots to anyone who would build a brick or stone structure worth at least $1,000. In 1901, Bauer built a large sandstone mercantile building on the northwest corner of Grand and Main and a brick and stone bank building. His brother, Henry, built another adjacent brick and stone building for his undertaking and construction businesses. The construction of the Bauer Bank Block on the southwest corner of the intersection was the last and largest effort in a successful bid to establish the town center at Grand and Main. Mancos owes it current configuration to the efforts of the Lemmon-Bauer faction.

Mancos incorporated in 1894, electing George Bauer to be their mayor every year until he declined in 1904. Poor health forced him to move to Mexico, where he died in Guadalajara in 1905. He is buried in a Mancos cemetery. The descendants of George and Henry carried on the various family businesses. Bauer family members operated businesses in Mancos for 94 consecutive years, up into the 1970s.