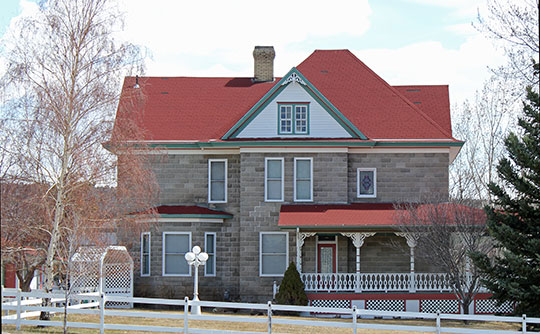 The Stolte family played an important role in the history of Cedaredge [1]. Arriving by wagon in 1896 Ernst J. Stolte was among the first settlers in the area. Stolte purchased 80 acres north of town and planted some of the area's first apple and cherry orchards. The family was instrumental in developing the local apple industry, an industry that is still thriving today. In 1909 Ernst and his sons constructed a packing shed and many local residents worked in the Stolte orchards and packing shed. The packing shed was relocated to Cedaredge's Pioneer Town Museum complex in 1991.

Ernst Stolte was born in Hanover Germany in 1842. He came to America in 1865 and married Elizabeth Lemche in 1870. They lived in Wisconsin until Elizabeth's health failed and they were advised to move to a dryer climate. They first went to Nebraska then to Denver and in 1896 relocated to Cedaredge with their daughter and three sons. One of the sons, Henry, married Rebecca Dulcena Wayman in 1901. They had seven daughters and two sons born between 1902 and 1921. The Stolte House was built for Henry's growing family.