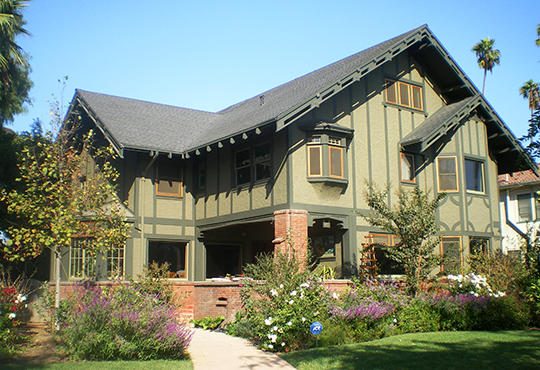 Like most of the neighborhoods in Los Angeles, Victoria Park began as part of a rancho. After winning independence from Spain in 1821, the Mexican government awarded more than 750 land grants, including the acreage that became Rancho Las Cienegas, owned by Francisco Abila and his family, Januario Abila Pedra Abila de Ramirez, Francisca Abila de Rimpau, Louisa Abila de Garfias. By the 1870s, Januario Abila owned the northeast section of the rancho, which included the land that was to become Victoria Park.

In the latter part of the 19th century, Southern California was prospering. There was strong demand for property and housing throughout the region, particularly in Los Angeles. The City kept annexing nearby towns, ranches, and farmlands, expanding its boundaries which by 1909 included all of the present-day West Adams District (home today to one of the largest collections of historic homes west of the Mississippi River). Land, once impossible to sell at even $5 an acre, commanded ever-increasing prices and not infrequently spurred "speculative mania," in the words of pioneer resident Harris Newmark, in his memoir, Sixty Years in Southern California. The real estate speculation resulted in numerous boom-and-bust cycles in the City's housing market. Nonetheless, in 1907, "nineteen substantial citizens," including General Moses Hazeltine Sherman and his brother-in-law, Eli P. Clark, partners in the Los Angeles Pacific Railroad Co., "united to create an exclusive residential enclave."

When Victoria Park was established, Pico Street was 80 feet wide and paved, but it was at urban Los Angeles' western reaches. The "countryside" still stretched west of here, and there was only a railroad track to the south, where Venice Boulevard is now.

Victoria Park was laid out atop West Adams Heights Hill with views of the city and of the mountains, "from Old Baldy to the sea." "Victoria Park has especially good car service," an ad of October 1907 touted. The closeness of the train tracks [‡] and quick travel time to Downtown "will enable business men residing in Victoria Park to take luncheon at home." [‡‡]

Victoria Park was laid out in a rounded shape that can trace its inspiration to the work of Frederick Law Olmsted, the chief landscape architect for Central Park in New York City. Olmsted, called the founder of American landscape architecture, felt that circular shapes broke up the linear look of most urban areas.

In Victoria Park, the lots were large enough to accommodate "homes of the highest class," each of which would use its lot number as its address (i.e.: Victoria Park No. 83), as was done in other exclusive enclaves like Chester Place, St. James Park, and Berkeley Square. The neighborhood's "drives," rather than "streets," were promoted as being "all 100 feet in width, with petrolith paved roadways and seven-foot cement sidewalks." Moreover, "the continuous stretches of lawn and shrubbery are most attractive. Victoria Park is beautifully lighted by stone and wrought iron electroliers, fifteen feet high, with five large electric globes on each." The developers lined the winding streets with "hundreds of palms, acacias and Monterey pines," along with tropical plantings.

Many of the original homes in Victoria Park were built between 1910 and 1915, and they were handsome and substantial indeed, with extensive use of high quality woods like mahogany and oak, paneled walls, beamed ceilings, conservatories and sun rooms, ornate leaded and stained glass, and imposing exterior facades, often three stories in height. The Holmes-Shannon House was one of the first homes to be completed, and represents a fine extant example of this period of development in Victoria Park.

The West Adams area was the prime area for residential real estate at the turn of the century. The location of Victoria Park in the West Adams area should have assured it of success. However, that was not to be so, even though some very substantial mansions were erected at the beginning. The sale of lots in Victoria Park, which had been subdivided before World War I, was far fewer than had been hoped. Shortly after the war, Victoria Park was rezoned and multifamily buildings appeared. A number of handsome duplexes were built there in the 1920s and 1930s.

‡ Pacific Electric, also known as the Red Car system, was a privately owned mass transit system in Southern California consisting of electrically powered streetcars, light rail, and buses and was the largest electric railway system in the world in the 1920s. It connected cities in Los Angeles County, Orange County, San Bernardino County and Riverside County. [en.wikipedia.org, accessed, May, 2014]