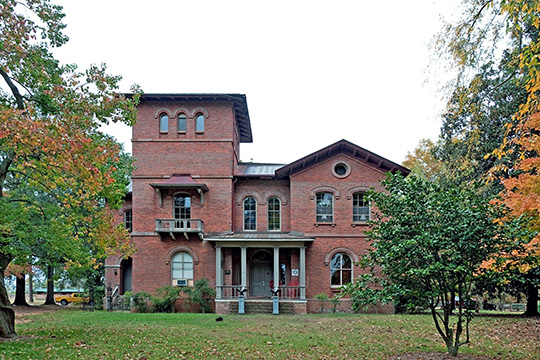 The city of Marion was founded on March 4, 1822 at what was then known as Muckle's Ridge. In 1817, Michael Muckle had cleared an acre of land from a dense forest and built a cabin on the present site of the Perry County Jail. Muckle later sold his improvement to Anderson West, sheriff of Perry County. At the suggestion of Joseph Evans, a South Carolinian, the county commissioners changed the name of the town from Muckle's Ridge to Marion, honoring General Francis Marion of Revolutionary War fame. After the location of the courthouse square and the surveying of streets, on May 22, 1822, lots were sold at public auction but due to the heavy rains, prices remained quite low. The early sale of lots included those adjacent to the courthouse square.

Marion grew slowly in the 1820's although in 1822, the Siloam Baptist Church was organized, and a courthouse, jail, a second private residence and three stores were erected. By 1826, however, the town's population totaled only 144 and Samuel Townes, in his history of Marion, notes that until 1828, the hamlet had the appearance of a private gentleman's country residence. After 1828, however, the town began to grow at a rapid pace and soon had the appearance of a thriving and bustling town. Marion's boom was the result of its strategic location. Direct commercial contact between Marion and Mobile, essential to the survival of the citizens, was made possible through the transportation of goods up the Alabama River from Mobile to Cahaba and then being hauled overland to Marion. Cultural improvements continued, the establishment in 1824 of the first school for example, and the establishment of two religious congregations. By 1834, Marion was the terminus of two stage coach lines.

In the 1830s, events occurred which further stimulated the growth of Perry County and, in particular, Marion. It was soon discovered that the soil of the adjacent Black Belt prairie was extraordinarily suitable for the cultivation of cotton, especially of an upland, blight proof variety of the staple. Hordes of farmers and planters swarmed into Perry County to take advantage of the cheap land and quickly established vast plantations. Marion, in particular benefitted from the flush times, becoming a local trade center for some of the largest planters in Alabama. Indeed, in 1857, the city was selected as the terminus of the Cahaba and Marion Railroad.

Town lots were again offered for sale in 1824, 1830, and 1831. The once sleepy town became a major cultural and residential center with numerous palatial townhouses of the local planters and merchants, located along Washington, Green, Lafayette, Dekalb and Clay streets. Property in the western section of the town, along and south of Green street, was quickly snatched up and in the years before 1860, scored of dwellings, mostly in the Greek Revival style, were constructed. The town's major business district grew up around the block surrounding the courthouse square. Although the town planners originally designated four lots for religious structures, the churches later built on lots immediately north and south of the business district, all located on Washington Street, including Siloam Baptist Church. Washington Street quickly became the town's major thoroughfare and it's most fashionable address.

One of the most interesting cultural accomplishments of early Marion was the establishment of three institutions of higher learning. Marion was a stronghold for the Baptist State Convention which published its weekly newspaper and held a number of its regular meetings in Marion. The Baptists had originally supported the Marion Female Seminary, a nonsectarian organization. Soon, however, the Baptists became dissatisfied with the operation of the Seminary and started their own educational institutions. In November of 1841, the Baptist State Convention met in Talladega where a committee recommended that the organization undertake the reestablishment of the manual training school which had failed in Greensboro in 1837. The Baptists were pleased with the success of Marion Female Seminary (1836) which they helped to organize, and therefore, the Convention petitioned the Alabama legislature to grant a new college charter. The charter was granted on December 29,1841.