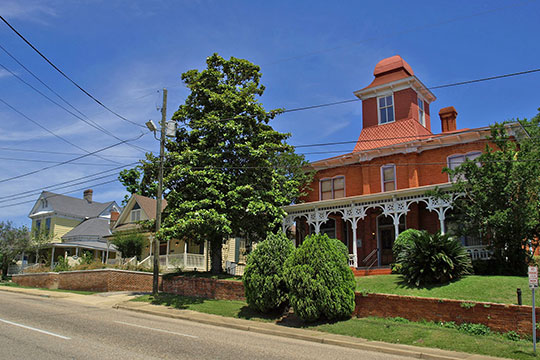 The Cottage Hill District was listed on the National Register of Historic Places in 1976. Portions of the content of this web page were adapted from a copy of the original nomination document. [‡]

The Cottage Hill District is situated on a low hill overlooking the Alabama River to the north and the downtown business area and Capitol Complex to the east. One of the most intact Victorian-era neighborhoods remaining in the city, the district is composed largely of closely spaced, one- and two-story residences dating from the late 19th Century. Trees, sidewalks and a uniform setback of approximately 15 feet lend unity to the area and enhance its residential character. The slightly uneven nature of the land and the numerous brick or stone retaining walls that enclose small lawns add variety.

As defined by a 1974 Montgomery city ordinance, Cottage Hill is a distinct, historically and geographically definable area bounded on the north by the Alabama River and Bell Street, on the west by an interstate highway, and adjoining dissimilar grid patterns on its eastern and southern boundaries. In addition, its eastern boundary marks the crest of the hill, while two of its streets dead end at the southern boundary.

The original high density of the district has been somewhat weakened by demolition and the construction of warehouses in the northern half. Consequently the 400 and 600 blocks of Clay and the northern side of the 600 block of Herron, which were included in the city district, have been omitted. Those houses facing north on Clayton were added.

Commercial structures compose 10 percent of the district and are concentrated in the northern half and along Goldthwaite.

Structural conditions in the district range from excellent to poor with approximately one-fifth of the structures (including warehouses and intrusions) considered to be in deteriorated condition. During the past year approximately 14 restorations were begun on the historically or architecturally significant structures and the district is being reclaimed as a residential and shopping area close to the heart of downtown Montgomery.

Cottage Hill, a city zoned historic district, is the one downtown residential neighborhood in Montgomery that retains the ambience and scale of a middle-class Victorian community. Most of the structures date from 1870 to 1910 and are well built, yet unpretentious, one- and two-story frame houses that reflect the taste and lifestyle of the urban middle class in late 19th Century Montgomery.

Originally known as the Hanrick Plat, the area was incorporated into Montgomery in 1839. In spite of its proximity to the two early settlements which merged to become Montgomery in 1819, there was little interest in the area until the 1830's when streets were laid out and lots established, probably by Edward Hanrick, a land speculator. Even then, interest remained slight. Only two lots were sold in the 1830's, followed by a third sale in 1846.

Development continued to be slow and, despite the construction of an Episcopal Female School on the fringe of the district in the late 1850's, Cottage Hill was still only sparsely settled by 1860. Although a small group of planters had established homes along Whitman Street, most of the residents were working-class people. Occupations of residents listed in the 1859-60 Montgomery City Directory include railroad employees, grocers, carpenters and laborers.

Only a few of the surviving structures can be dated, at least in part, to the early years of development. R.M. Berry, a printer, lived in a log cabin now incorporated into 508 Clayton. Also dating from the earliest period is the house at 448 Clayton, originally a central dogtrot style structure. Stylistically, the Dowe House at 540 Martha resembles the houses of this period with its symmetrical five-bay facade, low hipped roof and central hall plan; yet all of its door hardware bears a patent date of 1863, and the home may well have constructed in the 1870's in an earlier style.

The present concentration of late Victorian houses was built mostly after 1880 as residences for middle class merchants and clerks. A number of these are fine examples of a late 19th Century house type that features a gabled bay or room abutted by a front porch. Several houses of this type were constructed in the district by Robert Hugger, who came to Montgomery in the 1880's and was later joined by his brother Emile. After incorporating in 1897 as Hugger Brothers Construction Company, they were responsible for the construction of a large number of houses and buildings throughout the south. The four cottages at the southeast corner of Martha and Hanrick (529-543 Martha Street) were constructed by Hugger. Five other homes in the district (648 and 510 Clayton Street and 639, and 530 Martha Street) are similar enough to suggest they are the work of the Huggers.

The house at 510 Clayton Street, with its fine bracketed cornice, ornamented gabled front bay and Eastlake porch trim, is a noted example of this type of structure and was built in 1888 for Frank Allen, a clerk for Pollack and Sons. Slightly less ornate is 533 Martha, completed in 1891 by Robert Hugger, who occupied the structure for approximately 10 years. A few large scale structures were also built during the 1880's. The Mills House at 532 Clay is one of the finest in the district. Constructed in 1880 by Alfonso D. Mills, listed in various city directories as a cattleman, a building contractor and a land developer, it is thought to be the first brick veneer structure in the city, as well as the first to have central forced air heating. The Wagner House at 422 Herron Street was designed by a local architect, R.N. McGrath, for Christopher Wagner, a proprietor of a buggy shop on Lee Street. Less imposing, but equally well-crafted, is the house at 546 Clay Street, constructed in 1887 by Jacob Geible, a German immigrant who owned the Montgomery Carriage works.

Cottage Hill takes its name from the first public school opened in the district in April, 1891, drawing students from the surrounding neighborhoods. Located on the northwest corner of Herron and Hanrick, it was named the Cottage Hill School for a small red structure which had previously occupied the site. The school, rebuilt several times prior to 1904, continued to serve the area until 1963.

Around the turn of the century, the area along Goldthwaite Street became quite fashionable, and some important houses were constructed in the Queen Anne Style. The only remaining example, in the district proper, is 103 Goldthwaite, completed in 1896 for Benjamin Winston Walker, a U.S. Marshall and son-in-law of Thomas Alsop, who-owned much of the land along Whitman and Goldthwaite. After the early years of the 20th Century, Montgomery's finer families built their homes along the extensions of Court and Perry streets, leaving Cottage Hill to the middle and working classes. Prior to the depression, several small cottages and apartments were constructed in the area, and a series of small stores appeared along Goldthwaite.

During the late 1950's and 1960's, the area deteriorated and on the last master plan for the city was slated to become an industrial warehouse complex. Recognition of the irreplaceable character of the district and its potential for development as a downtown residential and shopping area came in the 1970's. In 1974 it was zoned as a historic district by the City of Montgomery.