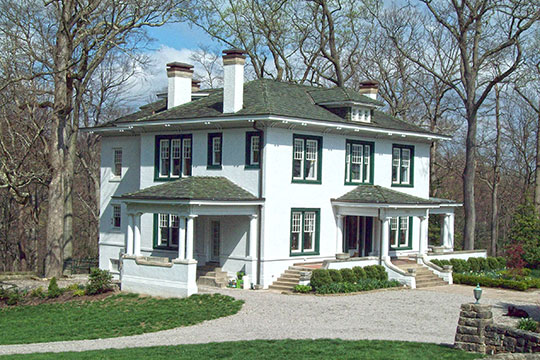 Dalgain (the Robert McCabe residence) was listed on the National Register of Historic Places in 1984. Portions of the content of this web page were adapted from a copy of the original nomination document. [‡]

Robert E. McCabe, for whom the house was built, was a prominent Charleston attorney active in the city's business life. Dalgain was built the year of his marriage to Margaret Fleming Ward. She was the daughter of Charleston's engineering giant, Charles E. Ward. Stonleigh, Ward's residence, was built a year later and is on land adjacent to Dalgain.

The house is a colonialized American Four Square with Italianate influence apparent in its roof and paired brackets. The windows have multi-paned upper sashes and single-paned lower sashes and wooden trim painted green, making an interesting play of color with the white stucco and green roof.

The house sits on a 2 acre lot at the northern intersection of Ridgeway Drive and Staunton Road.