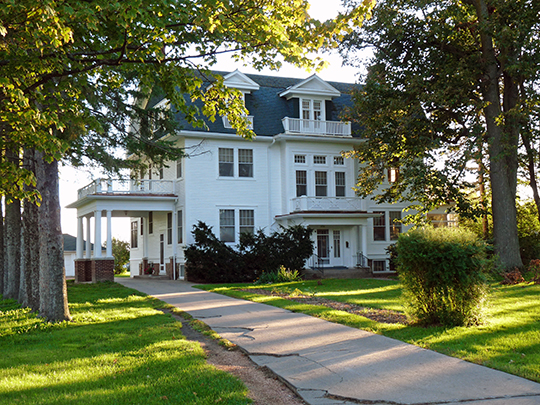 Marshfield, sprinkled out on a flat green prairie, is a busy center of the northern dairy belt. The city is patterned as rigidly as a chessboard, and industries are as diverse as pawns, knights, bishops, kings and queens. Many of its establishments handle milk and milk products, including casein and ice cream. Its factories manufacture veneer, steel and sheet-metal products, shoes, beekeepers' supplies, farm equipment, gloves, beer, butter tubs and bedding for farmers markets over a wide radius. Smaller business houses line both sides of Central Avenue, Marshfield's broad and brilliantly lighted "White Way."

The present city is the second of two Marshfields. The first settlers, Louis Rivers and his brother Frank, came in 1868 and built a tavern to serve railroad construction gangs. By 1872 swaths had been cut through the forest and the Wisconsin Central tracks passed directly in front of Rivers' tavern door. Six years later a depot — an empty boxcar — stood shakily in the midst of a litter of stumps and felled trees. Marshfield had no main street as yet, not even a road; only a few trails wound their way among enormous pines, around boulders, through swamps and over hills.

Gashed out of the forest near the center of the State, the settlement soon had other railroads — the Omaha, the Princeton and branch lines. Little complicated engines bumped and fiercely chugged their way up grades and rattled around curves banked the wrong way at 30 and 40 miles per hour. Tall pine stumps, too tough to grub and too strongly rooted to be pulled with oxen or horses, were left to rot around the settlement; standing timber was burned carelessly. By 1887 Marshfield had a monster sawmill, a furniture factory, stave and hub factories, boiler works, harness shops, nine hotels, 19 saloons and 2 newspapers — one in English, the other in German.

That year a great fire, caused by sparks from a locomotive, broke out in the lumber piles in the center of the city. Mill whistles screeched as a strong wind fanned the flames. Horse-drawn, brass-cylindered engines galloped towards Marshfield from Stevens Point, Spencer and other settlements; but hoses were burned off at hydrants and wooden ladders quickly caught fire. By nightfall the greater part of Marshfield was smoldering in ashes, having burned steadily since noon.

Within a few years a second city had been built; wooden frame gave way to solid brick; cheese making and dairying replaced lumbering. Today per capita sales in Marshfield are larger than in any other city in the State with the exception of Madison. Wood industries are still represented by a factory in which Wisconsin birch, basswood and maple are cut, boiled, barked, sawed, dried and sanded into golden veneer panels. When working at capacity, the factory consumes 65,000 feet of logs a day. The casein warehouse represents a more quiet and typical Marshfield industry. Into this small plant, smelling constantly of cheese curds, come quantities of coagulated skim milk to be dried in narrow 40-foot tunnels and shipped to larger factories.