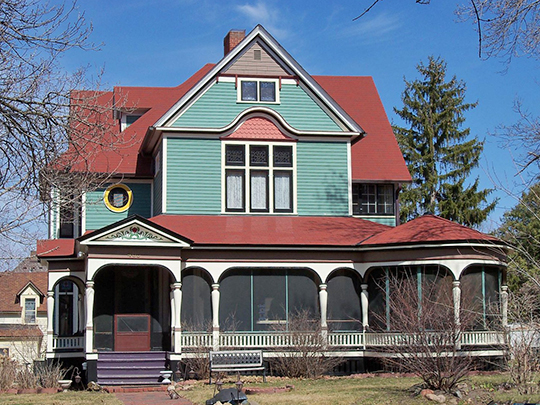 Hudson, the largest city on State 35 between Superior and La Crosse, is an old community built upon land which slopes gently down to the St. Croix River between the mouth of the Willow River and two great bluffs half a mile to the south. In 1838 Louis Massey, French-Canadian trapper, built a dugout here and married an Indian squaw. After quarreling with her for 25 years, Massey built a separate dugout for his mate, and for the remaining 15 years of their lives they lived in close separation.

In 1840, when the boundaries of St. Croix County extended far beyond their present limits, its seat was established at Brown's Warehouse (now Hastings, Minnesota). In 1846, when this settlement became part of Minnesota, the county seat was shifted to Stillwater; then in 1848 Stillwater also was given to Minnesota. The discouraged settlers on the Wisconsin side of the river established no other county government until 1853 when the present St. Croix County was laid out, with Hudson as the seat.

After a period of boom the city declined in the 1870s when nearby Minneapolis and St. Paul began to flourish as wheat-milling centers, dominating the trade of the entire region. As the nearest Wisconsin gateway to the Twin Cities, Hudson still attracts considerable trade and traffic both by rail and highway.

A small, landscaped Municipal Park and Bathing Beach lies at the entrance of a Toll Bridge (15-cents for car and driver; 5-cents for each passenger; trucks and trailers 25-cents to one dollar), which crosses the St. Croix River into Minnesota, 15 miles east of St. Paul. Below the bridge the river widens and stretches away between high, wood-grown walls, losing itself around a curve of lazy hills far downstream. Prospect Park overlooks Hudson and the upper river.