Photo: Home in the Bluff Street Historic District, Janesville, WI. The Historic District was listed on the National Register of Historic Places in 1983. Photographed by user:Boscophotos, 2015, (own work) [cc-by-3.0 (creativecommons.org/licenses/by/3.0)], via Wikimedia Commons, accessed January, 2016. 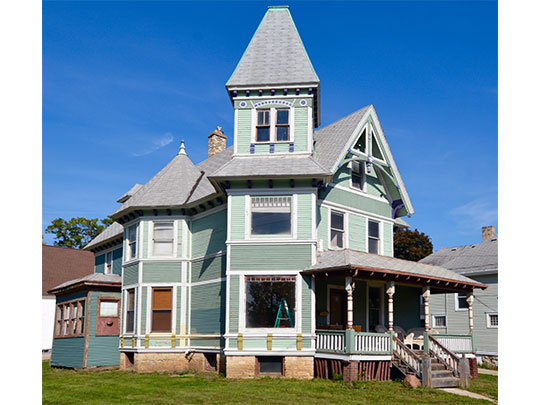 The Bluff Street Historic District was listed on the National Register of Historic Places in 1983. Portions of the content of this web page were adapted from a copy of the original nomination document. [‡]

Stretching ten blocks along Bluff Street, roughly parallel to (and overlooking) the west bank of the Rock River, the Bluff Street Historic District is a collection of residential and church buildings, dating from the late 1840s to the early 20th century, which is significant for its excellent Victorian residential architectural styles, for its historic associations with many of Beloit's leading 19th century citizens, and for its historic connections with Beloit's Norwegian community.

The Bluff Street Historic District is one of the older residential areas of the City and was first settled in the late 1840s, following the construction of the first bridge across the Rock River. John Hackett, a man of influence and substance in the pioneer community, played an important role in the development of Bluff Street. He purchased a farm on the west side of the river that included land on Bluff, from St. Lawrence to the Illinois state line. This land was platted as Hackett's Addition and parcels were quickly sold in response to Beloit's growing population. By 1856, most land above Hackett's Addition that is included in the district was platted as Tenny's Addition, Walter's Addition, Merrill's Addition and Rockwell's Addition. There were at that time, however, very few houses in that part of the district. On West Grand near Bluff, the site of the second Beloit High School, later occupied by the Municipal Center, John Hackett built a substantial home. Its construction initiated a west side trend of homebuilding by prominent Beloit citizens.

The most monumental west side homes were built on and adjacent to Bluff. Throughout the 19th century, it continued to be home for numerous city leaders, many of whom spared little expense in constructing their houses. Industrialists and businessmen were among those who built in the Bluff Street district, which was close to the rapidly expanding industrial areas along the river. Skilled laborers, such as industrial patternmakers and carpenters, also built their homes there, which were more modest in size, but distinctive in style and detail.

Among the prominent citizens who built homes or lived in the neighborhood, whose houses are included in the district, were: Selvy Blodgett, 417 Bluff, early Yankee settler and businessman; Alonzo Aldrich, 423 Bluff, co-founder of the Beloit Iron Works in 1885, and its president for many years; Allan L. Dearhammer, 954 and 512 Bluff, successive residences of this carpenter/contractor; George H. Anderson, 259-61 St. Lawrence, agent for the American Express Company, and manager of the Wisconsin Telephone Company; and John and Edmund Thompson, 312 St. Lawrence of the Thompson Plow Works.

Without exception, each of these same structures retains architectural significance as examples of their types, periods and methods of construction, particularly in the case of the two Dearhammer houses and the William Quinn house, 341 Vernon, built by another carpenter-builder, for his own use.

The Norwegian Lutheran Church has historical significance for its association with the Norwegian community in Beloit. Built in 1877 on land donated by prominent Norwegian-American industrialist John Thompson, the church served the needs of the city's largest Norwegian congregation and conducted services exclusively in Norwegian. By 1919 the congregation had sold the church and merged with another Lutheran group in the city. John Thompson's house, a pivotal property located at 312 St. Lawrence, is the last property which reflects the significant contributions of this prominent immigrant, who founded the Thompson Plow Works, long one of the city's leading industrial concerns.