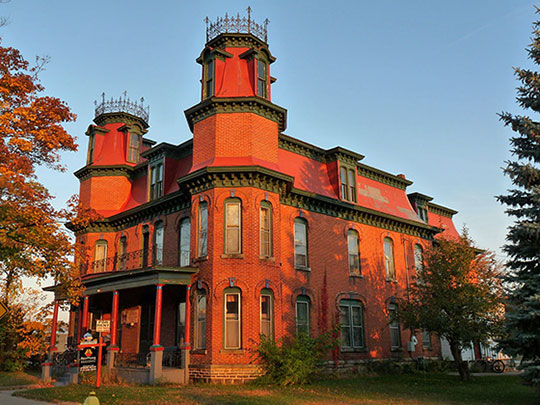 The Christina Kuhl House [‡] (1416 Main Street), was listed on the National Register of Historic Places in 1978.

The Christina Kuhl house is a massive French Second Empire house of frame construction with a red brick veneer. Shortly before the house was completed, the Portage County Gazette, in an article entitled "An Elegant Residence," described the house:

This fine structure is 47 x 84 feet in size, two and one-half stories, or 34 feet high. The first two stories are 24 feet high, and beneath is a fine double cellar. On either of the front corners is a two story bay window, with a cupola above, which extends to a heighth (sic) of 44 feet above the ground. There is also a bay window on the west side. The house is practically a double one, with twelve rooms on the first floor, and the same number on the second, besides closets, hallways, etc. On both floors is a spacious, finely proportioned kitchen, pantry, parlor, sitting, dining and bath room and wood house, besides several pleasant sleeping apartments. The halls, dining rooms and kitchens are finished in hardwood, and the handsome wide staircase is of the same material. A mansard roof covers the structure, and this is covered with tin. The walls and ceilings of the parlors, sitting rooms, halls and bed rooms are papered in a handsome, attractive manner, the workmanship of D. R. Rogers, who also has the contract for doing the entire painting, which is being done in a superior manner. Aug. Lubitz took the contract for doing the carpenter work in the early spring, and has given the best of satisfaction, while the brick and stone work was done by Henry Vetter and the plastering by Mr. Chanley. The Stevens Point Manufacturing Co. furnished the sash, doors, blinds, brackets, etc., and the roofing was put on by C. Krembs & Bro. The cost of this new house will be about $10,000, and it is hoped that Mr. Kuhl and family may enjoy its comforts for very many years.

The exterior of the house is little altered. The twin towers are joined at the first story level with a central entrance porch of simple design which features Doric columns and cast-iron balustrades. The many window openings are tall and narrow with stilted elliptical arches and keystones of cast iron incised with a star pattern. Brackets embellish the cornices under the eaves and at the edges of the mansards. Ornate cast-iron cresting shipped from Chicago crowns the towers which feature narrow dormers with round-arched hoods. Dormers on the house have double arched windows and flat roofs.

The interior of the house is much altered, having been converted to apartments sometime in the twentieth century. A one-story frame shed at the north end of the house is insignificant and is not included in this nomination.

Known locally as "the castle," the massive and imposing Kuhl house is an important local landmark. It is one of the two French Second Empire houses remaining in Stevens Point. Wendell Nelson, a local historian, states that it is "one of the few unspoiled houses we have left in its original condition." When it was built it was considered "one of the finest and most expensive as well as the largest, residences in Stevens Point."

The first house on the property was built by Adam Kuhl in 1877. It was a small, 42' x 34', one story high structure which held the distinction of being the first house built of Stevens Point brick. Kuhl, an immigrant from Hesse, was one of the first German-born businessmen to settle in Stevens Point. He arrived in the area in the 1850's and was listed in the 1860 census as a cabinetmaker. In 1867 he founded a brewery which became a well-known local institution, producing 600-700 barrels of beer a year for the local market. In 1883 Kuhl died, leaving a wife, Christina, and six children.

In 1886 Mrs. Kuhl began a new residence on the site, moving the small brick house to another location. The home was completed in September of 1886. Mrs. Kuhl took over the management of her husband's business affairs until her death on January 16, 1919. According to Mr. Nelson, "The building became a rooming house just before her death, although family members continued to live there. Although long-term renters became the norm later, initially rooms were rented to businessmen or transients for a night or two. After Mrs. Kuhl's death, the house was inherited by her son, Fred J. Kuhl, who operated the firm of Kuhl Brothers, a dry goods store, with his brother Adam J. Kuhl Jr. Upon his death in 1932 his wife inherited the house and used it along with several other holdings as income property until her death in 1974.