Photo: Homes in the Columbia Historic District, Cedarburg, WI. The Historic District was listed on the National Register of Historic Places in 1992. Photographed by User:Frekee (own work), 2011, [cc0-by-1.0 (creativecommons.org/publicdomain/zero/1.0/deed.en], via Wikimedia Commons, accessed March, 2014. 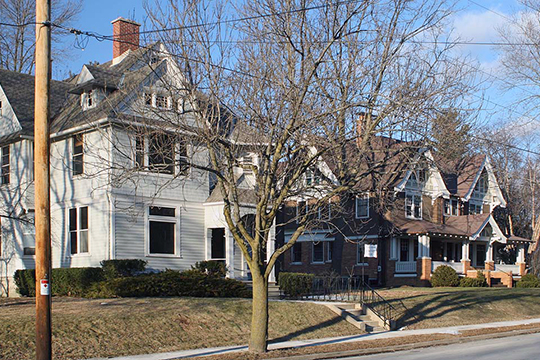 The origin of the name Cedarburg has been lost to the ages. When the area known today as Ozaukee County was surveyed in March 1837, the surveyor of record, in his notes, referred to Cedar Creek (the stream) in his land description of the section within Township 10 Range 21 East. The spelling of burg is definitely of German extraction. A burg, in German, refers to a fortress, which the area could have resembled in the 1840s. Considering the area became populated by ethnic Germans, it appears the name was derived from the combination of the name of the dominant feature Cedar Creek and the German burg.

The earliest land sales noted (after the official opening at Green Bay in late 1835) were those of Ann Gurnsey Noyes, Eliphalet Cramer, George B. Warren and Jonathan Spencer in March 1839. They purchased land patents to acreage which was primarily located along the banks of Cedar Creek, in particular where the prospects for establishing water-powered mills appeared the most advantageous.