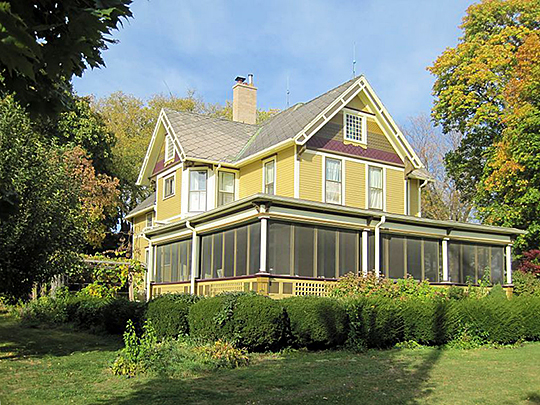 Busy Fort Atkinson contrasts sharply with quiet, rural Whitewater. Blocky factories stand on the banks of the Rock River near the heart of the city.

In 1832 General Henry Atkinson, pursuing Black Hawk, stopped to set up a stockade with two blockhouses at the confluence of the Rock and Bark Rivers. In 1836 the first permanent settler, Dwight Foster, built a house near the half demolished fort. Later, in 1844, a Mississippi steamboat, coming up the Rock River with a load of pleasure-seeking passengers from Janesville, found its way blocked by a low bridge. An early chronicler writes: "... since the passengers outnumbered the entire population, they took out a bent, allowing the boat to pass."

In 1873 William Dempster Hoard, later Governor of Wisconsin (1889-1891), who was responsible more than any other man for Wisconsin's development as a dairying State, began to publish the Jefferson County Union here. The year before Hoard, realizing that the continued planting of soil-depleting grains was destroying land fertility, had organized the Wisconsin State Dairyman's Association with the aid of six other men. Elected secretary, he toured the State, preaching the virtues of the cow, "the foster mother of the human race." His success was phenomenal. When Babcock discovered a method of testing butterfat in 1890, Hoard agreed with the creamery owner who declared that "this will make the farmers more honest than the Ten Commandments ever did." In 1885, still campaigning, he expanded the dairying column of the Jefferson County Union into the Hoard's Dairyman, which today is read by farmers throughout the country. As Governor, Hoard sponsored anti-oleomargarine legislation.

Besides being an important shipping and trading point for the regional dairy farmers, Fort Atkinson also has a cannery and plants that manufacture barn equipment and poultry supplies, "little pig" sausages, dairy equipment, hose, and saws, both ordinary and musical. The musical saws ground here are subjected to more rigid specifications than carpentry saws. Manufactured as alto, tenor, baritone and bass blades, they are made straight-backed to permit a consecutive scale, and of smooth homogeneous steel so that notes may run all through. For purity and clarity of tone they are the same thickness from tooth edge to back, not tapered for clearance as are utility saws. Most ornate of the company's musical saws is the gold-plated model, its mahogany handles studded thickly with jewels. The local company not only offers a correspondence course in saw playing, but also published an annual called Sawing News of the World.