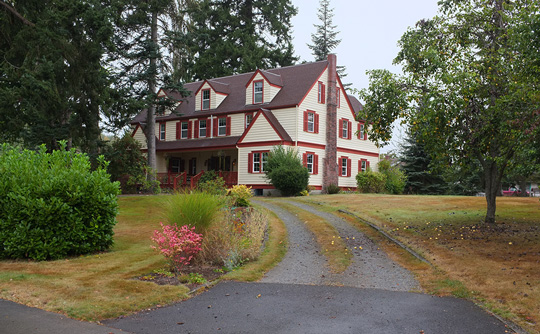 The John Galbraith House [‡] was listed on the National Register of Historic Places in 1982.

The Galbraith house is located on its original site at 140 Oak Street East, Eatonville, Washington. It stands in the center of a rectangular one and one quarter acre lot which slopes gently from Prospect Street, at the rear entrance to the property, to Oak Street East in the front. The house is flanked by mature elm trees, and the property is divided by stands of Lombardy poplars, large Douglas firs and other evergreens. The arrangement of the trees, and the manner in which the circular driveway separates the front yard from the house, creates the illusion of several distinct areas on the property.

Built in 1925 by John H. Galbraith, owner of the Eatonvllle Lumber Company, the house is located near the now defunct mill and is surrounded by company houses. The company store, which extended credit to the many workers who lived in the area, is also located on Oak Street, just southeast of the Galbraith house. Homes built for Galbraith family members and top management personnel surround the house. These houses are considerably smaller than the main house, and therefore exaggerate its size.

The Galbraith house itself is a large Colonial Revival structure, two stories in height and essentially rectangular in plan. A deeply recessed front porch is symmetrically flanked by two projecting gabled bays. The main roof is a steeply-pitched longitudinal gable with asphalt shingles replacing the original green stained cedar shingles. Wide lapped cedar siding covers the exterior wall surfaces. A centrally-placed formal entry features a multi-paned door with sidelights. Fenestration includes both four-over-four and six-over-six light sash with dark green louvered shutters on both first and second floors. The overall impression is one of simplicity and great size, the latter emphasizing the prominence of the house within the community.

The interior of the Galbraith house was designed for entertaining. The rooms on the main floor consist of a large living room with adjoining library, a formal dining room, powder room, and a large kitchen. Built during Prohibition, the house features a secret stairway from the library to a private barroom (now a study) in the basement. The foyer at the main entrance provides access to the second floor which contains four bedrooms, a sewing room, and two baths. The third floor was reserved for servants; here are a large central room, one bedroom, and two small rooms under the eaves. There is also a bathroom on this floor.

The interior is as it was originally, with broad coved, plaster walls and high ceilings. All lighting fixtures and porcelain bathroom fixtures are original (the latter in need of restoration). A sawdust furnace in the basement (converted to oil) provides heat for the hot water radiator system. The only known alteration to the house consists of the shortening of the steps to the front entrance. These once spanned the entire width of the porch, but have been cut to about two-thirds that width.

The John Galbraith House, built in 1925 in Eatonville, Washington, is a major focal point in the community's history. Located in an area of Eatonville known as "Mill Town," the house faces the remains of the once-prosperous Eatonville Lumber Company. Both John Galbraith and the Eatonville Lumber Company were intimately linked with the developing lumber industry of southern Pierce County and simultaneously with the economic well-being of Eatonville in the early years of this century. Galbraith acted as treasurer and then president of the Company from 1913-1941, and served as a progressive though controversial mayor and chairman of the school board for many years.

The forests of southern Pierce County represented from the beginning a major economic resource of Eatonville. At an early date, groups of independent loggers had established logging railroads to transport their products to Tacoma. The Chicago, Milwaukee and St. Paul Railroad, recognizing the economic potential of tying these rail lines together, established the first major feeder line through the area terminating at Eatonville. This feeder line still serves southern Pierce County and eastern Lewis County, and its freight still consists largely of logs or timber products. Feeder lines facilitated an even more rapid expansion of the lumber industry, so that it soon attracted entrepreneurs from the East. A group of investors from Milwaukee, Wisconsin built a lumber mill in McKenna and then a second in nearby Eatonville in 1907. The Eatonville mill suffered from mismanagement and, after a short time, the Bank of California took control and sought new managers. T.S. Galbraith was hired in 1909 to operate the mill. By 1913 Galbraith and E.J. McNeeley of Tacoma gained a controlling interest in the company.

Galbraith was known as a man of forceful personality with a sincere interest in the town of Eatonville and its progress. He gave the town much of his time and energy, serving nearly 22 years as mayor and several terms as chairman of the school board. Although some of his decisions and projects were highly controversial, and for a time split the community into factions, Galbraith never hesitated to use his influence and economic power to bring to completion any program he believed to be in the best interest of the town or the school. His terms as mayor were marked by many progressive accomplishments.