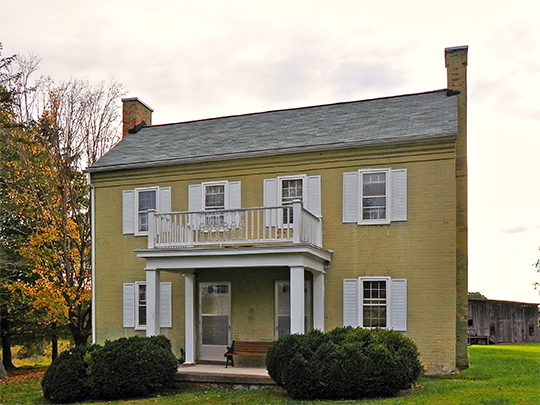 Prior to European settlement, the area occupied by the Town of Blacksburg served as a crossroads for Native American tribes. The Canawhas primarily lived in present-day Floyd and Carroll Counties. The Shawnees lived north of the area, and the Cherokee lived to the south. The "Indian Road," which developed and linked these tribes together, ran from the James River, near present-day Buchanan, through the area occupied by the Town of Blacksburg, on towards Radford where it crossed the New River. The natives frequently used this "Indian Road" when they went hunting or fighting neighboring tribes, and it was later used by Europeans to access the region.[1]

In the mid-1700s, a frontier farming community called Drapers Meadow was established in the region and grew along the headwaters of Stroubles Creek, becoming part of Montgomery County in 1776. In 1772, Samuel Black purchased 650 acres of land in the Drapers Meadow area. This land was eventually split between his sons John and William. In 1798 with the growth of Drapers Meadow, William Black petitioned the General Assembly to establish a Town on 38-1/4 acres of his land. On January 13, 1798, Blacksburg became an unincorporated Town, and William Black signed the Town over to its trustees the following August. The Town was arranged in a four-by-four grid pattern creating sixteen blocks. Community buildings and private residences were placed strategically throughout this grid, commonly called the "Sixteen Squares". It is bounded by Draper Road, Jackson Street, Wharton Street, and Clay Street and has remained largely intact.

In addition to its history as a frontier settlement, Blacksburg has long excelled as a place of higher education. The Olin and Preston Institute was established in 1854 as a Methodist preparatory school. After some financial difficulty, it was re-established as the Preston and Olin Institute, and in 1872 Dr. Harvey Black and the Reverend Peter Whisner, both trustees of the Institute, successfully lobbied the General Assembly to establish a land-grant college in Blacksburg on the Institute's property. Virginia Agricultural and Mechanical College was thus created and ultimately developed into Virginia Polytechnic Institute and State University, commonly called Virginia Tech.

Although Blacksburg now has a population of approximately 40,000 individuals, its small town scale and character is preserved in the historic buildings of downtown and in the farming community of the Toms Creek Basin. There is strong local pride in the genuine character of Blacksburg as well as an accompanying desire to remain true to its history.