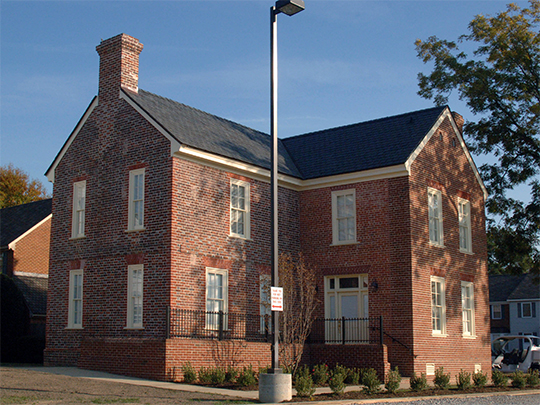 While there were reported landings in this area of Virginia before 1607, the journey of Captain Christopher Newport represents the best starting point for the history of Hampton. He sailed his three ships into the Chesapeake Bay and likely landed at Kecoughtan village before continuing on to establish the first settlement at Jamestown. The first settlement in Hampton seems to have been Fort Algernourne constructed at Point Comfort under Captain John Radcliffe in 1609. Elizabeth City County was formed in 1634 by decree of the House of Burgesses. By 1640 there was report of a jail and courthouse at Elizabeth City County. In 1691 the construction of the port began and the town was laid out in a cross road form with the two axes formed by King and Queen Streets. In 1705 the City of Hampton was officially established by the House of Burgesses. Development continued from this early plan for much of the eighteenth century with most of the structures being frame houses or taverns and small governmental buildings. In 1718, Hampton was the departure point for the two British ships which ended the career of William Teach "Blackbeard" and his head was displayed at the Hampton Port.

From its earliest days, seafood was an industry for Hampton, but it was not until the Reconstruction period that the product became a major export industry for Hampton. In the late 1800s, oysters began to be harvested in large quantities and were a leading product for the entire Tidewater region. The firm of J.S. Darling and Son became the leading producer in the early 1900s and the Hampton Bar oyster became a nationally and internationally known shellfish. By 1880 McMenamin & Company had accomplished with crabs what Darling and Son had done with oysters. McMenamin perfected a canning process which allowed the crabmeat to be stored indefinitely and shipped around the world and helping create the name of "Crabtown."

James S. Darling Sr. added to the Darling family contributions to Hampton with the creation of the Hampton and Old Point Railway Company which began trolley operation in 1889. This led to development of the West End in reaction to increased demand for housing from workers who wanted to live in Hampton and take the trolley to Newport News. The rail and trolley service to the area continued to expand through the late nineteenth century and into the early twentieth century. The result for downtown Hampton was trolley tracks running down Queen Street. However, Hampton followed the national trend and with the advent of busses in 1923, and the continued expansion of automobile use, which began with the first car in Hampton in 1903, the trolley system began to quickly be replaced. Demand kept the mainline from Hampton to Phoebus running until 1944. Regular train service and boat service had preceded the trolleys by several decades and would continue on well into the twentieth century.

One of the biggest changes for Hampton occurred on July 1, 1952, when Hampton merged with Elizabeth City County and the town of Phoebus to form the much larger City of Hampton. This would create a much larger urban area, change Hampton forever from a town to a city, and also move Hampton's focus for many years away from its downtown to the now much larger overall city. This change marked an end to the developmental history of historic downtown Hampton and its leading role in the city's history. This change brought about the end of passenger train service and steamer service to the city, both in 1954. In 1957 the Hampton Roads Bridge Tunnel opened siphoning away much of the previous boat and train traffic which had previously passed through Phoebus and downtown Hampton.