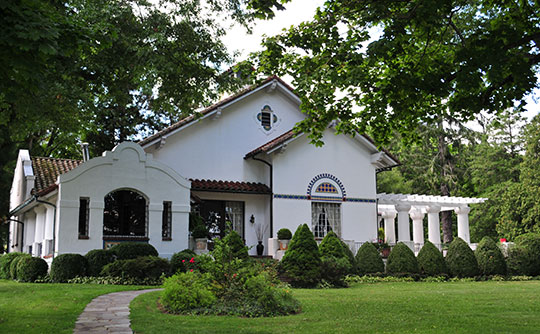 The town of Galax[1] was established in 1903 when a spur rail line was constructed from the textile village of Fries to Cliffview, north of present-day Galax. A group of local investors, organized by James Carico, formed a real estate company and purchased 375 acres on Chestnut Creek as a site for a new town. The group, which included Captain John Waugh and Thomas L. Felts, persuaded the Norfolk and Western Railroad to extend a line into the new town, which they called Bonaparte. The town's name was changed to Galax in 1904, reportedly because those decorative leaves made up the first express freight shipped on the new line.

Galax was chartered in 1906. The town grew quickly and in this same year a high school was established. The First Annual Catalogue of Galax High School described its location as "a little country town at the terminus of the Norfolk and Western Railway. It is free from the temptations and evils characteristic of so many of our towns and cities. Our citizenship cannot be excelled anywhere."

By 1908, the population of Galax stood at 600 people, but growth came quickly as the timber and furniture industries accelerated. Early in the town's history, Captain Waugh and others invested in the Galax Furniture Company to utilize the area's rich timber resources. Galax also became a significant shipping point for cross ties, acid wood, and tan bark. By 1911, Galax was home to four lumber dealers and eight saw mills.

The focus on wood products continued into the 1920s as furniture factories flourished in Galax. In 1919, Vaughan-Bassett Furniture factory was opened. This successful enterprise was followed by Vaughan Furniture in 1923 and Webb Furniture in 1924. These factories along with the earlier Galax Buggy Company and other businesses created a strong economic base that enabled Galax to be home to two banks, three drug stores, three hotels, two restaurants, and four physicians by 1917. The 1920 U.S. Census indicated that the population had more than doubled since 1908, and included 1,250 citizens.

The Town of Galax was separated from Carroll and Grayson counties and became an independent city on December 6, 1953.