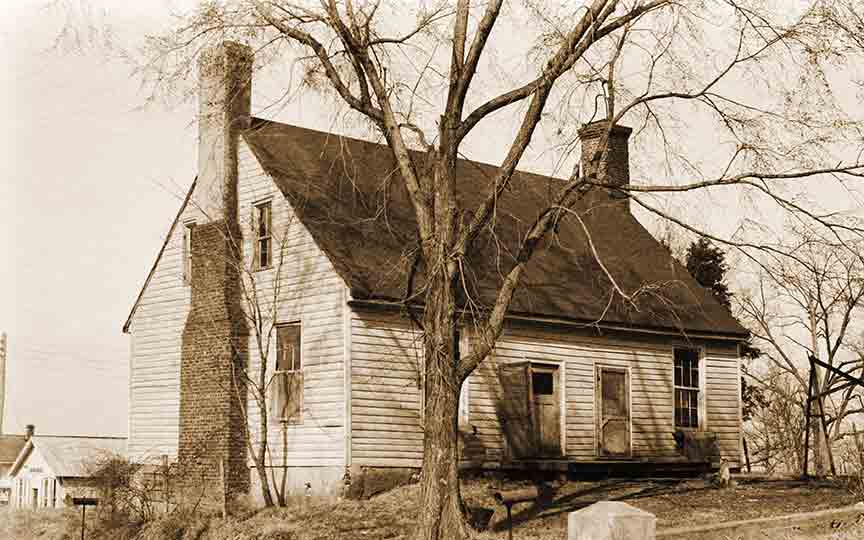 Goochland County [†], rich in resources of minerals, forests, farmland, and water power, was formed in 1728 from a portion of Henrico County. The Piedmont Virginia county was named in honor of William Gooch, Virginia's newly appointed lieutenant governor. Comprised of289 square miles of rolling hills and boggy creek bottoms, lined on the south by the fertile bottomlands of the James River, the county is bounded to the northwest by Fluvanna County, to the north by Louisa and Hanover counties, and on the east by Henrico County.

The Goochland area was the home of the Monacan tribe from long before the earliest European settlement in Virginia. An expedition in 1608 found two Monacan settlements. The influx of whites was devastating to the native settlements. In 1669, the tribe was said to contain thirty bowmen. The Indian settlements were dispersed and the population gone by the first years of the eighteenth century. An early trail, said to have been traversed by Susquehanna and Iroquois, followed the path of Route 522 (Sandy Hook Road). The best land in Goochland remained unclaimed by eastern Virginians as late as 1700.

Goochland County was established in 1728 from the western portion of Henrico County. The first courthouse was built just above Atkinson's Ferry near present-day Maidens on a privately held tract of land. The justices of the county court contracted with James Shelton to build a courthouse and jail in 1730 and 31. The courthouse, specified to be a frame building measuring 36 by 20 feet, was not received until 1737 and served until 1763. In 1744, Albemarle County was taken from the western part of the county followed in 1748 by the creation of Powhatan County from the portion of Goochland south of the river. The county then assumed its present shape.

The first houses in Goochland are not extant. What do survive are a few of the most substantial dwellings built in the mid-to-late eighteenth century by the wealthiest landowners. These were designed using an architectural design language brought with the settlers from the Tidewater. The surviving houses take the center-passage form, in which a central hallway is flanked on each side by rooms, one of which is usually a formal room and the other a principal chamber. These are invariably built of framed timber in the established Virginia framing tradition. Virginians had developed an indigenous framing tradition by the early eighteenth century, in which the heavy, three-dimensional forms of Anglo-American framing were simplified and standardized, with L-shaped comer posts, modular studs infilling regular ten-foot bays, and pairs of long front and rear walls linked by the joists spanning between.